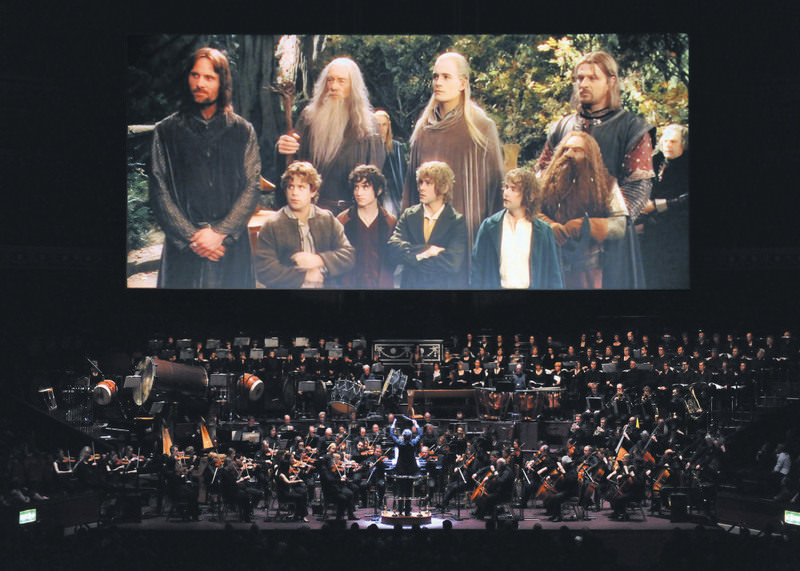 by Daily Sabah Feb 08, 2016 12:00 am
J.R.R. Tolkien's epic trilogy "The Lord of the Rings" will come to life on stage, with an epic concert under the baton of Howard Shore, who composed the scores of Peter Jackson's cinema adaptations of the series of novels. Shore, who is both an Academy Award and a Grammy-winner, brought Tolkien's literary imagination to the life with his melodies in Peter Jackson's "The Lord of the Rings" adaptation "The Fellowship of the Ring." Shore's music expresses Peter Jackson's film as an immense symphonic work – a uniquely developed vision drawn from centuries of stylistic tendencies.

The score of "The Lord of the Rings" is considered one of the most complicated and comprehensive film scores in the history of cinema. The choir, composed of 100 singers, and a symphony orchestra of 86 musicians, will perform the music of "The Fellowship of the Ring" while the film is screened.

Shore's score captures not just Fellowship's sweeping emotion, thrilling events and grand journeys, but also mirrors the very foundations of Tolkien's Middle Earth. Musical techniques, styles, instruments and artists were gathered from the four corners of the world, and aim to leave a musical mark on Tolkien's cultures, which are based on hobbits living simple lives in rural area, Celtic melodies that echoes for nature, with mystical Elves and spiritual Eastern colors. The Dwarves, Tolkien's abrasive stonecutters, receive columns of parallel harmonies and a rough, guttural male chorus. The industrialized hordes of Orcs claim Shore's most violent and percussive sounds, including Japanese "taiko drums," metal bell plates and chains beaten upon piano wires, while the world of Men, the flawed yet noble heirs of Middle Earth, is introduced with stern and searching brass figures.

All these characteristics of Middle Earth and its sounds are in need of a symphony orchestra, with a mixed chorus, boys chorus and instrumental and vocal soloists, all singing in the Tolkien-crafted languages of Quenya, Sindarin, Khuzdul, Adûnaic, Black Speech, as well as English, all to recreate Tolkien's imagination on stage. Shore's writing assumes an earthy, grounded tone built on sturdy orchestral structures and a sense of line that is at once fluid yet stripped of frivolous ornamentation. This incredible performance will be staged at Zorlu Performing Arts Center on April 2 and 3, with Shore and a backing choir and symphony orchestra.
RELATED TOPICS