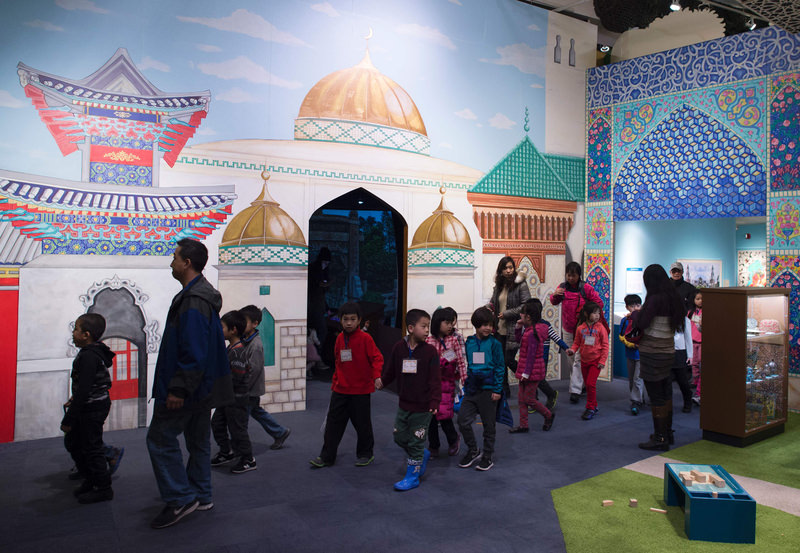 by Mar 05, 2016 12:00 am
The United States may have seen an unprecedented anti-Muslim backlash in recent months, but one New York City museum has challenged perceptions by teaching children about the wealth and diversity of Islamic culture.

The Children's Museum of Manhattan on the Upper West Side has been turned into an indoor playground where children can touch and experiment with artifacts of Islamic culture in a vibrant, colorful exhibition.

One little girl wrapped a piece of Senegalese fabric around her waist like a sarong and wriggles around. "It's lots of fun for dancing!" she said. Other children in her class are sorting through Turkish ceramics or inhaling the rich aroma of spices from Zanzibar.

Called "America to Zanzibar," the exhibition focuses on culture in Muslim communities, not religion itself, so the tenets and practices of Islamic doctrine have been left well alone. "We don't interpret the religion," said Andrew Ackerman, executive director of the museum. "It's about the people. It's about how people that share a common belief express it so differently," he added.

The 2016 race for the White House has been dominated by the rise of Republican frontrunner Donald Trump, a New York real estate mogul who has repeatedly bashed Muslims and advocated a ban on them entering the country.

Recent attacks in Paris and San Bernardino, California, have heightened what Muslim Americans call an unprecedented backlash in a country increasingly fearful about the risk posed by the DAESH extremist group.

Ackerman said current events had nothing to do with the decision to mount the exhibition, which has been six years in the making. His desire is to lift the lid on the culture in Muslim-majority countries that is either poorly understood in the United States or not represented at all. "The challenge of this project is how do you represent so many different cultures," Ackerman said. "How do you pick and choose what to show to give the biggest overview possible in a small space? That conversation was completely independent of any current events." One strong point of the exhibition is that it also focuses on Islamic heritage in the U.S. and not just on far-away countries.

Children can learn about the mosque in Dearborn, Michigan, a Tajik-inspired tea house in Colorado and Senegalese fabric sold in Harlem, New York City. A room is also dedicated to Muslim Americans gathering together memories, books, CDs and photographs. "We really wanted to think about the American story, which is so much more diverse than the rest of the world," Ackerman said, adding that New York City is home to people from every Muslim-majority country in the world.

"It's very good. They are learning about other cultures," said second grade teacher Judith Espaillat of her class of children visiting the exhibition.

The word "Muslim" does not mean much to Alex, one of her pupils, but he hasn't been bored at all. During the first week of the exhibition, which opened Feb. 13, the museum welcomed more than 13,000 visitors despite exceptionally cold temperatures. "They want to show that this culture is normal, not crazy," said visitor Francesca Azzariti, an Italian living in New York City.

Other than fabric and ceramics, the museum devotes one room to mosques and the wealth of their architectural tradition. The exhibition also shows contributions by Muslim thinkers to science. "I think it's a nice antidote to some of the other ways that people are talking about Muslim cultures, a diverse non-threatening culture rather than what is in the media all the time," said British tourist Grania Brigden. "It's nice to see the other elements - the food, the colors," she said. "Islam in Africa, Asia; it's not just Syria."

The exhibition will run at least a year before possibly traveling to other cities within the United States. Intended for children, it can also offer an entry point for parents too. "There are a lot of people who don't see themselves as museum goers, but they'll come here because it's for the children," Ackerman said. "If we can inspire curiosity as a museum, that's what we go for."
RELATED TOPICS