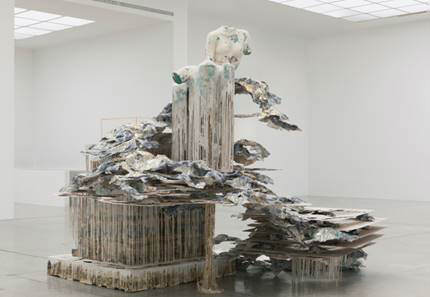 by Daily Sabah Mar 08, 2016 12:00 am
Internationally renowned sculptor Diana al-Hadid has launched her first solo exhibition in the Arab world at the at New York University (NYU) Abu Dhabi art gallery. Running until May 28, the exhibition takes its title from a central piece entitled "Phantom Limb," a medical term for the sensation that a missing arm or leg is still present and able to move. Al-Hadid's work transforms Renaissance and Classical imagery into contemporary sculptural forms, which appear to be decaying or resurfacing, often in a cascade of white melting gypsum.

On the occasion of the first solo exhibition in the Middle East by acclaimed sculptor Diana al-Hadid, the art gallery at NYU Abu Dhabi has announced that a monograph on the exhibition will be published by Skira, for international distribution.

The book launch will be held during Art Dubai on Wednesday, March 16. The monograph is produced by the art gallery at NYU Abu Dhabi in collaboration with Brown University's Bell Gallery, and published by Skira publishing. The publication with be in two languages, English and Arabic.
Last Update: Mar 08, 2016 9:20 am
RELATED TOPICS