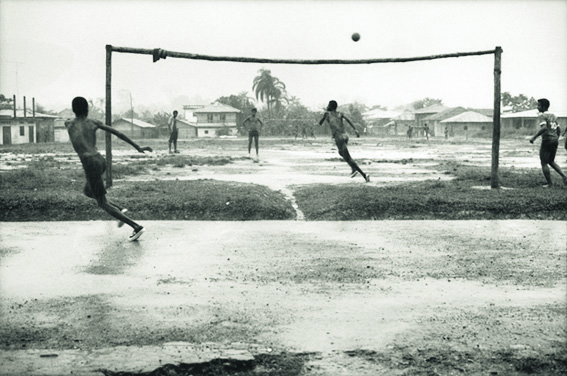 The French Cultural Center in Ankara is hosting an impressive photo exhibition that displays photographs taken by the Magnum Photograph Agency, which focus on unique football moments that are full of passion, enthusiasm and determination, throughout the decades in various parts of the world.

Not many passions bring people together the way that the passion for football does. Only this sport illogically triggers emotions that can change the mood of nations and even the fate of governments. Most of the photographers of well-known photography firms have a chance to photograph members of the football world as well as spectators, football matches, footballers and people who kick empty cans in an isolated part of Africa, on a Brazilian beach or in the alleyways of England.

The exhibition reveals how the roots of football influence and touch people's souls around the world, regardless of race, religion and nationality. The unique beauty of the sport and the aesthetics of photography come together for this exhibition. The display, which celebrates every aspect of football, is reminiscent of an exciting social network that has been trailing millions across the world for half a century.

The prestigious Magnum Photograph Agency was founded by Robert Capa, Henri Cartier-Bresson, George Rodger and David "Chim" Seymour in 1947 in order to let photographers display their work free from the restrictions set by magazines. They believed this artistic freedom will enable artists to focus on the things that really matter. Since its foundation, the agency welcomed some of the best photographers in the world. The agency has transferred many superb photographers who successfully make emotions shine in their work.