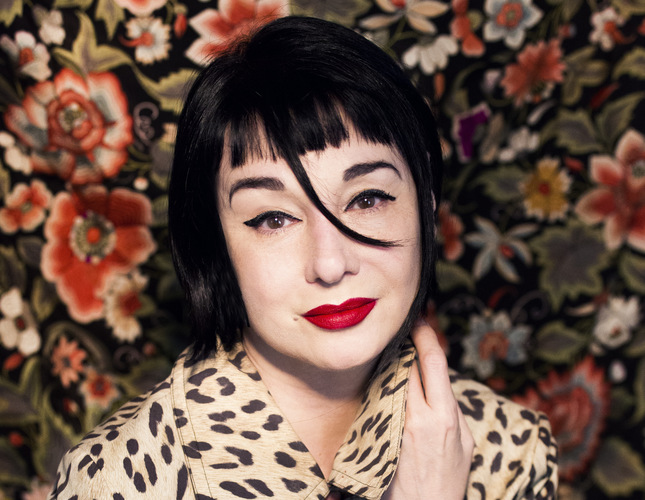 One of the best producers of traditional Portuguese fado, Misia will dazzle in Istanbul with her impressive voice and polyglot performance this Friday at the CRR Concert Hall

Portuguese fado singer Misia will once again perform on March 25 at the Cemal Reşit Rey (CRR) Concert Hall. Born in Porto, Portugal, Misia comes from a multi-generational family of artists. Her mother was a classical Spanish dancer and her grandmother was a music hall and burlesque artist, both of whom were born Barcelona. She lived in her hometown until the end of adolescence. By then, she would sing occasionally as an amateur in fado houses. At the age of 20, she moved to Barcelona for family reasons. In 1991, after working as a music hall singer and dancer as well as on television, she decided to return to Portugal. She settled in Lisbon and started to build her own fado repertoire.

She personally contacted poets, composers, singers, writers, photographers, designers and Portuguese stylists in order to engage them with her vision of fado. In light of her success, she received the Vermeil Medal, the highest honor of the city of Paris, and she is an Officer of the Order of Arts and Letters of the French Republic. Additionally, Chilean filmmaker Carmen Castillo made two films about Misia for the Franco-German channel Arte.

Misia is a "character voice" who participates in various projects outside her career as a fado singer. Examples of this eclectic personality include "The Soldier's Tale" by Stravinsky, "The Seven Deadly Sins" by Kurt Weill and Bertolt Brecht, "Maria de Buenos Aires" by Piazzolla e Ferrer and her involvement with the baroque Mediterranean group Arpeggiata. In 2013, she acted in the play "The Invisible Abattoir" by Karin Serres. She is currently preparing a theater project from a text by Antonio Tabucchi.

Misia will make her debut at CRR Concert Hall as part of her Para Amalia tour on March 25. In light of her concert that is taking place on the same stage 20 years after her first performance in Istanbul, she spoke to Daily Sabah about her life and music.

Daily Sabah: Your stage name is inspired from a biography. What influenced you the most about that female character in the book?

Misia: My stage name was taken from a book I read in Madrid when I was 30. Before that, I used my real name, Susana. I loved reading biographies of women at that time, but what inspired me was the sound of the word "Misia."

DS: Fado was included on the UNESCO Intangible Cultural Heritage of Humanity list in 2011. What is so special about this music?

Misia: Fado means fate, destiny. It is an urban music genre that speaks about the most important human feelings.

DS: You mentioned in an interview that it took a long time to convince record labels to release "Garras Dos Sentidos;" however, the album was released in Japan and then became popular in Portugal. How did you feel about that?

This album was released in 62 countries and it was the first fado album that only featured traditional fado music and prestigious poets. I liked this project very much, and it's very important to me.

DS: You sang the poem "Biraz Kül Biraz Duman" written by Turkish poet Ümit Yaşar Oğuzcan. How do you decide on the poems that you will sing, and what is the difference between performing poems and written lyrics for a song?

I wanted to sing pieces from the countries that are more emotional for me, and Istanbul - I don't know the rest of Turkey - was a very strong experience in my life, personal and professional. The first time I sang in Istanbul was at 1996. I really liked the music and the meaning of the poem at the time. I am used to singing poets. It was an honor for me to record with the prestigious musician Kudsi Ergüner.

DS: The album "Ritual" was recorded in the style of the 1950's, in memory of Casas de Fado artists. For you, which period do you feel is most suited for your style?

Well, I am a contemporary artist that sings an urban kind of music. This means my time is just now.

DS: With contributions of Fanny Ardant, Miranda Richardson, Ute Lemper, Carmen Maura and Maria de Medeiros, you mix tango and bolero with fado on the album "Drama Box." What is your opinion about mixing different genres with fado?

I didn't use to mix or use fusion a lot, but I sometimes put different kinds of music that are expressing the same feelings about life together on the same album.

DS: You recorded "Para Amalia" for the 15th anniversary of Amalia Rodrigues' burial. What does this album mean to your career?

It means I am at peace with myself and with my path. Usually young fado singers begin by recording Amalia's fados; I did the opposite. I constructed my own repertoire and sonority, with the generous help of musicians, poets and others, and only now, 25 years later, I feel it is the time to approach Amalia's universe. She is the best.

DS: Le Monde defines you as "the name that influenced new fado singers." Who are your favorites among new generation of fado?

DS: Fado has a big tradition. Is fado always sad music? Maybe as listeners we only know the most about its sad aspect. Is there any specific fado that affects you with both its lyrics and story? How can a singer bear with pain all the time?

My opinion is that fado is deep, not sad. "Biraz Kül Biraz Duman" is also a deep text like fado. Foreign audiences love melancholic fados, but we have also happy ones. A singer doesn't bear with pain; a singer is a kind of medium, someone who spreads emotions. A singer clean their soul when they sing; I feel that.

DS: We know you have been to Istanbul a few times and you love Istanbul. If you want to describe Istanbul through fado, which songs would you choose?

"Fogo Preso" from the album "Drama Box." It has the poetry of Vasco Graça Moura and music by Fontes Rocha.

DS: What are the upcoming projects for you after "Para Amalia?"

In the end of 2016, a compilation covering my 25 years of singing will be released by Warner Music. Also, I will perform for 10 nights in a theater in Buenos Aires in August, a theater piece inspired in a book of the Italian writer Antonio Tabucchi.

DS: What kind of repertoire should we expect at the March 25th CRR concert?

Two parts. One part featuring piano and voice with Neapolitan maestro Fabrizio Romano, and a second part with the guitar trio of traditional fado. Not only Amalia Rodrigues' repertoire but also some new fados composed specially for this album. There will be projections of images, too. I'm anxious to sing in front of an Istanbul audience once again. We have a love story between us.