Rare 16th century Ottoman treasures to be auctioned in London 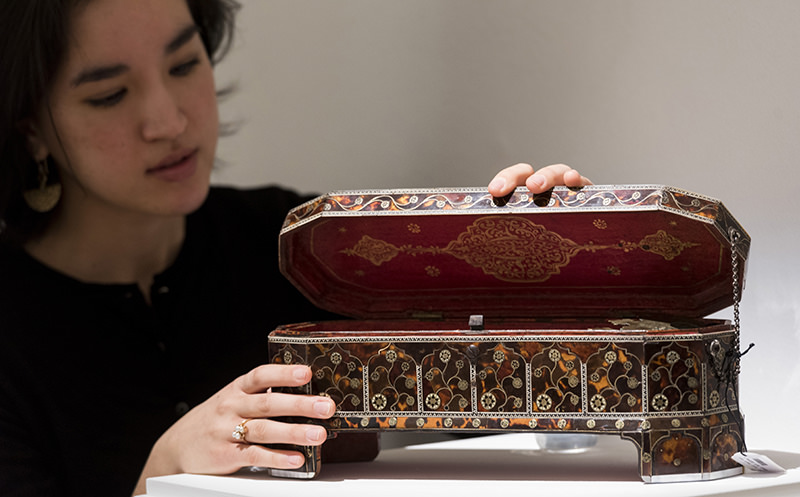 Treasures from the Ottoman Empire are being auctioned in London as part of Sotheby's Arts of the Islamic World auction during its annual Orientalist and Middle Eastern Week through this Thursday.

A painting showing the enthronement of Sultan Osman II (r.1618-1622), by a European artist travelling with the Austrian Ambassador Baron Mollard, circa 1618, is seen as the most important offering. The painting is known as the earliest depiction of an Ottoman court ceremony.

The Orientalist sale, set for Tuesday, will showcase 40 pieces expected to fetch between €20,000 to €1 million. A painting called The Imperial Gate, Hagia Sophia by Turkish painter Sevket Dag will also be among the pieces in the auction.

Highlights of the auction also include a magnificent Ottoman Tortoiseshell and mother-of-pearl scribe's box from the late 16th century, a rare Iznik lavender-ground pottery matara from the late 16th century, and a rare crusader sword inscribed with Arabic motifs from the Mamluk arsenal at Alexandria. In the auction, paintings reflecting daily life in Istanbul during the 19th century are getting significant attention.

Speaking to Anadolu Agency, Benedict Carter, Sotheby's head for Middle East auction sales, said that one the rarest pieces in the auction is an imperial Ottoman aigrette, or decorated bird's plume for adorning a headdress.

"The Turban ornament it is in the form of stylized turban itself, so we can date it to from the actual style of the object from the late 17th to around the early 18th century, when they call it the Tulip Era, where Tulips became a decorative motives in all kinds of arts," said Carter. "It has large emerald in the center surrounded by diamonds, which actually I have never seen on the market before."

Sotheby's has been bringing artworks from around the world to collectors since 1744. When it expanded from London to New York in 1955, it became the first international auction house. This year's Islamic world auction will end on April 20.