Travels with Game of Thrones 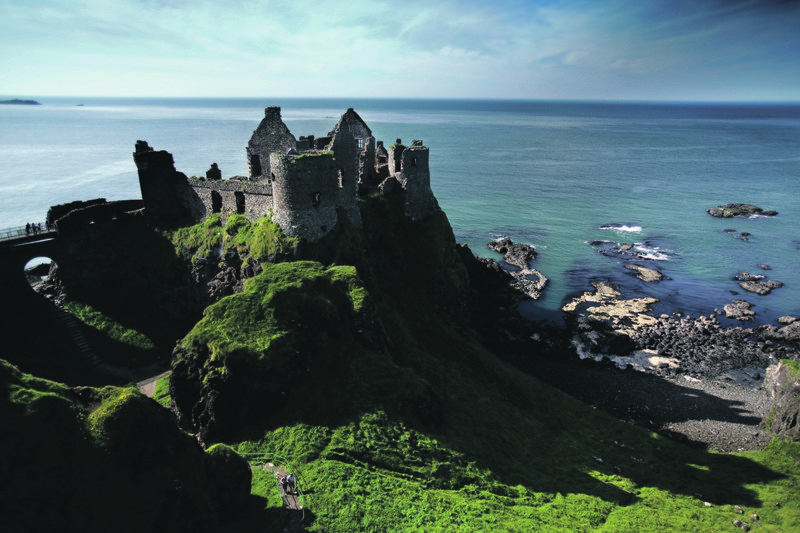 Fans are counting the days until April 24 when the sixth season of 'Game of Thrones' will air. It is a show that pulls in viewers from all over the world with its realistic treatment of human passions and follies, fantastical elements and spectacular settings

It is no secret that location is a deciding factor in academics' conference choices. In 2015, the great grapevine of email lists alerted me to one in Northern Ireland and one in Malta, and who was I to ward off the charms of either place? Choosing my panels and identifying the attractions to be visited on the off day, I saw that both were filming locations for "Game of Thrones." And so after I registered online for the conference and booked an Airbnb, the next thing to do was secure a spot on the "Game of Thrones" tours.

As a fan, I feel I am not worthy. I have not read the books nor do I have the family trees of the several families memorized. But I am as addicted as the next girl. What pulls me in, as I suspect many other people as well, is the chilling realism that a show riddled with fantastical elements manages to muster. It is known as the series that will kill off its most loved characters. More importantly for me, no action in the plot is wasted. Actions have reactions, however late they may be in coming. This may be why I appreciated the "Red Wedding" episode a bit more than some other viewers may have done; it tightens the plot. When you break your promise, there is always a price to pay. People are vengeful, and this is one of the first lessons we learn when we read history. "Game of Thrones" narrative reverses our understanding of the deus-ex-machina, the miracle that helps the hero in their most difficult hour. There are many people who play God, and lots of magic, but no miracles. The big man will crush the small man, no matter how well trained Oberyn might be.

"Game of Thrones" is an amalgam of all the horrifying and inspiring things humans have done throughout history. All cultures and histories seem to find echoes in it, and that is how George R. R. Martin must have envisioned it. The Turks, for instance, see elements of their Central Asian ancestors in the Dothraki, in the old mantra of "horse, woman, weapon." But the identification does not end there. The Turkish audience also took to the Mediterranean looks of Oberyn, embraced him as one of their own, such that upon his death, several eulogies did the rounds in Turkish social media that were written in the old heroic style. And of course, let us not forget that Turks now live in a land that was part of the Byzantine Empire, and we know and acknowledge Byzantine games when we see them.

The series production plays into everything the modern man and woman want but cannot have. We want to ride horses and wield swords. We want to be dressed in leather and fur when it is cold. We want to have flowing silk robes when it is hot. All of these feel like shared human traditions we have forgotten and want to recuperate, lost habits we want to experience vicariously through a well-chosen cast. The several kingdoms with their varying geography, climate and social norms offer something to everyone's taste. The moral high ground belongs to Winterfell, where local, lived tradition seems to be respected. This is contrasted to the unpracticed knowledge of the expensive bound-volumes of the ivory towers of King's Landing. It is no surprise that with its greenery, wet weather and Celtic myth and mist, Northern Ireland was chosen as the setting of the brave people of Winterfell while King's Landing is shot in various Mediterranean locations.

In Northern Ireland, "Game of Thrones" tours have become part of the phoenix tourism phenomenon, where the Belfast of a few decades ago has risen from its ashes to attract tourists not just interested in the history of the Troubles, but also in the amazing landscape advertised in the series. Our guide Andrew, who is an extra in the series and sports a polar jacket with "Stannis Troop" written on his arm, tells us jokingly that there is not a single household in Northern Ireland that does not somehow work for "Game of Thrones." As the minibus makes its way from central Belfast to the countryside, we are shown clips from the show shot in the locations we were about to visit.

Of course, the Irish countryside is the stuff of idylls and myths with or without the "Game of Thrones" connections. However, it adds that bit of extra thrill when you realize you are looking at the Winterfell tower from where poor Bran was pushed down. Imagine how far we have come - from hating Jaime in that first episode to actually liking him in the fifth season. Such is the alchemy of Martin and the production. The locations you visit are, expectedly, never quite the same as the ones you see on screen. While there is a slight sense of disappointment in that, one emerges from the tour with an appreciation of computer-generated imagery (CGI) techniques and how from a single tower, the director can build a whole settlement. At the empty shell of a castle where Robb Stark is supposed to have been crowned, we are given cloaks and daggers to play with. And just as we are posing for tableaus, the rain starts to pour down. We dawn our capes, appreciate the hardiness of the people of the North and understand why Ireland is the perfect place to film the series.

While there, the guide teases us and says we might run into cast members on our journey. After a lunch at a pub where the crown is passed around for selfies, we go out to see two Inuit dogs that play the dire wolves. I do not exaggerate when I say that I could not have been happier had it been any other member of the cast. I must also confess that the one time I shed a tear when watching "Game of Thrones" was the scene where Jon Snow and Ghost reunite. The bonus of the tour for me is that the guide, his thick Irish accent notwithstanding, looks like Jamie from "Outlander" - another fantasy series about loyalty and betrayal with horses, leather and capes, set in Scotland - and I imagine all kinds of crossover episodes.

There are more crossover possibilities; a few months later I was in Malta, which, it turns out, is where practically all the sets in the Mediterranean have been filmed. An island in the middle of the Mediterranean, Malta combines all aspects of Mediterranean culture, and in its architecture is an amalgam of styles that Martin and the producers seem to have been going for when they created King's Landing. The gardens of the palace are shot in a botanical garden not far from the capital, Valletta. But the island is filled with so much beautiful stone architecture that looks over beautiful deep blue water that even the bits that have not appeared in the series look familiar from "Game of Thrones." The language spoken on the island, Maltese, is itself an amalgam of all Mediterranean languages and sounds like an Arab teenager trying to construct an extraterrestrial tongue - not unlike the language that Khaleesi speaks when addressing her subjects. In the gardens of the "palace," we actually run into the President of Malta - it is a small island - opening a canary fair, and she actually stops to say hello.

We learn that "Game of Thrones" had to pack its bags and go across the water to Croatia and then to Morocco when the crew covered a large area with sand that killed the delicate flora in a protected area. In our guide Malcolm's nonstop narrative - he, too, was an extra in the series - the stories of decapitated knights floating on the sea during the siege of 1565 mingle with how Arya walked down certain steps having just seen her father's head cut off, reminding us that history always has something up its sleeve that can rival any of Martin's ruthless plotlines. While in Northern Ireland "Game of Thrones" seems to have exploited the populace for the various armies, in Malta, every filmable location seems to have been filmed. Our guide takes us to the furthest point from Valletta, where the hatching of dragon eggs was filmed. It is early evening in this remote place; the sky has turned purple, the sea is calm and there is something very witching about the place. Just as we lose ourselves in the magic of the moment, Malcolm tells us about the harsh conditions of the shoot, and how the director at times did away with basic health and security measures. Some of the stories he told us about the cast and crew mirror the Byzantine happenings in King's Landing.

Once again, life imitates art, which of course takes us back to the attraction of the series in the first place. Although "Game of Thrones" is a fictional fantasy world, the characters, their passions and particularly their darker sides are all too real. They act out scenes of mysticism, internecine violence, bloody battles that we recognize in the histories and cultures we ourselves are entangled in - not least in the historical locations where the series is shot. With "Game of Thrones," we look at ourselves, with the help of Martin's transformative imagination, through a glass, darkly.