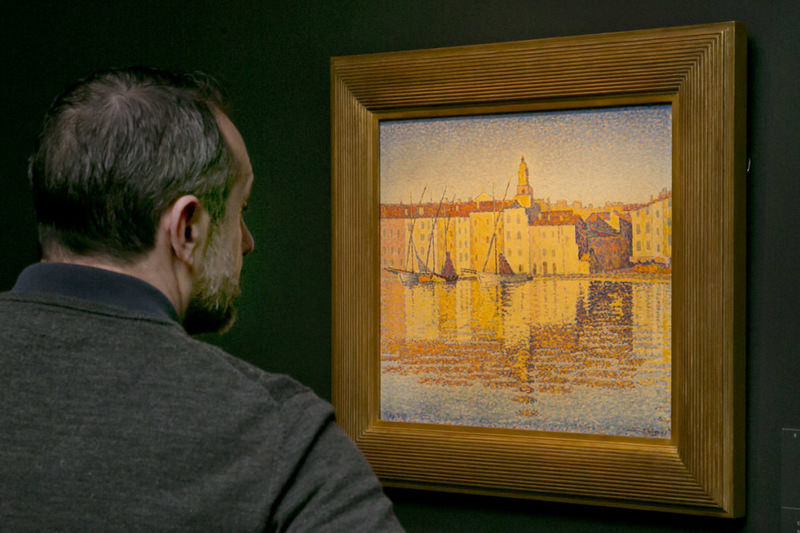 by Associated Press
May 10, 2016 12:00 am
A rare marble sculpture by Auguste Rodin and three French paintings never before at auction are among the highlights of Sotheby's sale of impressionist and modern art.

Paul Signac's "The Port Houses, Saint-Trope" could bring $8 million to $12 million and is among 62 works being offered at the evening sale Monday.

An important example of the pointillist style, the bright painting depicts the French coastal town of Saint-Tropez in 1882. It was the first time the neo-impressionist artist had visited the town, a place he returned to often. The Saint-Tropez painting has been in the same family for nearly 60 years, purchased in 1958 by the parents of John Langeloth Loeb Jr., the former U.S. ambassador to Denmark. The auction record for a Signac work is $14 million, achieved in 2007.

Sotheby's also is offering two major works created during the short-lived Fauve period. Andre Derain's 1906 view of the River Thames, "Red Sails," is estimated to sell at between $15 million and $20 million. Maurice de Vlaminck's 1905 landscape near Paris, "Underbrush," has a $12 million to $18 million estimate.

Fauvism was characterized by its use of saturated colors and simplified forms as a way to express the artist's emotions. It lasted a short three years, and only four major Fauve paintings have come to auction since 2010.

A Derain painting that sold for $24 million in 2010 set an auction record for both the artist and a Fauve painting.

Rodin's "Eternal Springtime" was created out of a single block of marble in 1901-1903. It features a floral motif base of two lovers in a passionate embrace. It is believed to be the fifth of a series of 10 known carvings of the subject that Rodin created in marble. The auction house said the version in the sale was last auctioned in 1977, and could bring $8 million to $12 million.

The auction record for a Rodin marble is $4.9 million for his "Eve" set in 2014. His "Iris, Messenger of the Gods," a bronze work owned by Sylvester Stallone that sold for $16.6 million in February, holds the auction record for any sculpture by the artist. The sale also features an early portrait of Claude Monet's wife Camille and works by Pablo Picasso, Joan Miro, Edvard Munch and others. On Wednesday, Sotheby's will be offering contemporary works including a self-portrait by Andy Warhol and a blue canvas from Cy Twombly's "Blackboard" series.