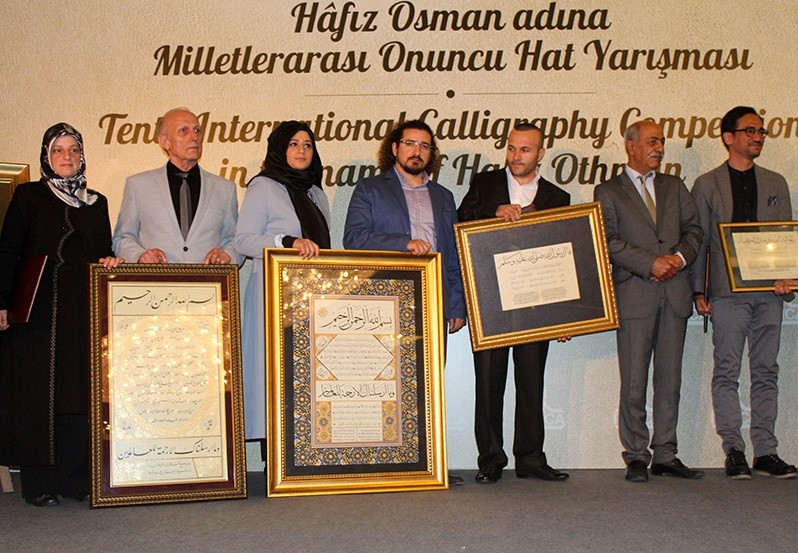 The results of the 10th International Calligraphy Competition have been announced. Organized by the Organization of Islamic Cooperation (OIC)-affiliated Research Center for Islamic History, Art and Culture (IRCICA) every year to keep Islamic arts alive and encourage young artists, the competition is held for the commemoration of calligraphist, scholar and Sufi Hafız Osman. Following a week-long assessment phase by the distinguished jury composed of Abdulridha Behiye al-Farjawi from Iraq, Jalil Rasuli from Iran, Fuad Başar from Turkey, Mossad Khodeir from Egypt, Obeyda Banki from Syria, Hamidi Belaid from Morocco, and Davut Bektaş from Turkey, with honorary members Professor Uğur Derman and master calligrapher Hasan Çelebi, the winners of the competition were announced by IRCICA General Director Associate Professor Halit Eren at a press conference in Istanbul.

The 10th International Calligraphy Competition attracted 688 calligraphists from 36 countries and a total of 975 calligraphy works were presented to the jury. After the first assessment, 314 of the works were taken into the final assessment and 38 works were granted special mention awards. Although there weren't as many encouragement awards as in previous years, 51 works were granted encouragement awards as there was a great number of quality calligraphy examples in different writing styles. A total of 122 calligraphy works, which were in 11 different calligraphy styles, were awarded and $199,250 in prize money was granted to the winners. During the press conference, artists Filiz Derindere and Ayşe Karakuş from Turkey, Adem Ebrem from Algeria and Azmir ibn Abdul Karim from Malesia were presented with ijazah - a license given by the teacher to the student in the traditional way that authorizes the latter to practice and to teach the art.

The winners of the competition were: Abrurrahman Depeler from Turkey in Jaly Thuluth category; Muhammad Jabir al-Sayyid from Egypt in the Thuluth category; Sirwan Kamal Ali from Iraq in the Naskh category; Salim Hamidi from Turkey in the Jaly Taliq category; Mohammad Gaber al-Sayyid from Egypt in the Muhaqqaq-Reyhani category; Habib Ramazanpour from Iran in the Taliq (Nastaliq); Seyit Ahmet Depeler from Turkey in the Jaly Diwani category; Mohamad Zaenudin Ahmadun from Indonesia in the shared category; Abdessamad Mihfad from Morocco in the Diwani category; Farhad Yasin Nadir from Iraq in Qufi; and Sahir Yaagoubi from Morocco in Maghribi won the first titles. However, no one has been named as the winner of the Rika category as none of the works were considered worthy.

Every year, IRCICA dedicates the competition to one of the pioneers of the art of calligraphy. Hence, they aim to encourage young artists to follow the path of great masters and commemorate these prominent artists every year. Within the scope of this tradition, this year's competition was held in the name of Hafız Osman who lived in Istanbul between 1642 and 1698. He learned the art of calligraphy from the best instructors of his time. The Quran copies that were written by Hafız Osman were published once again in the last century and his name became known worldwide. Hafız Osman was also the calligraphy teacher of Ottoman sultans Mustafa II and Ahmet III. He brought a breath of fresh air with his innovations in Thuluth- Naskh and Rika styles.