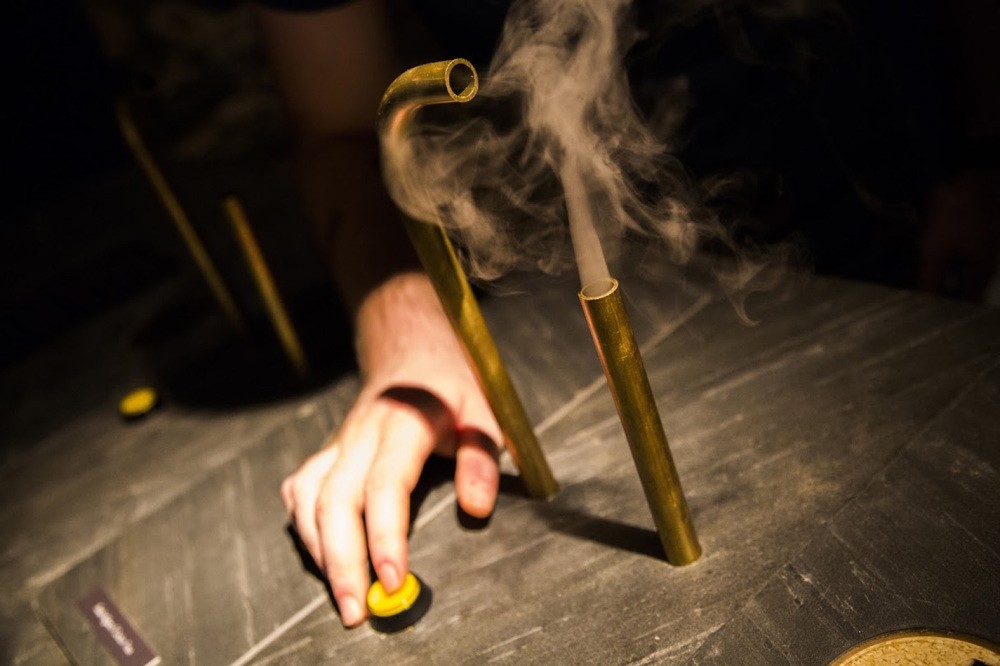 The human sense of smell is something we often forget the importance of. For the visually impaired, the sense of smell is the key to understanding life, and it is without question that scents and aromas hold an important place in people's lives. There is an incredible and undeniable connection between the human memory and the sense of smell. Certain scents can be etched in one's memory forever, with sensory association causing the human brain to associate certain smells with specific memories from their past. When familiar scents are recognized by a person, for example, the memories and desires related to the scent will come to life again. People who lost their sense of smell struggle to recall their memories. For those who do remember important memories, scents are associated with home; an appetizing meal, the smell of clean soap or the smell of your favorite flower. Your mom's dower coffee smells like naphthalene. Then your street, your quarter and your town must have welcomed you with honeysuckle, acacia trees, linen and ramblers at your entrance of garden, daphnia and the roses as big as a baby's head. The soil must have smelled after the rain. All of these are fading away under the layers of asphalts and concrete cities where trees are even surrounded by concrete circles on pavements in a way that they cannot take in enough water to rise high in the sky or try to grow in large flowerpots without having contact with soil like new generations. 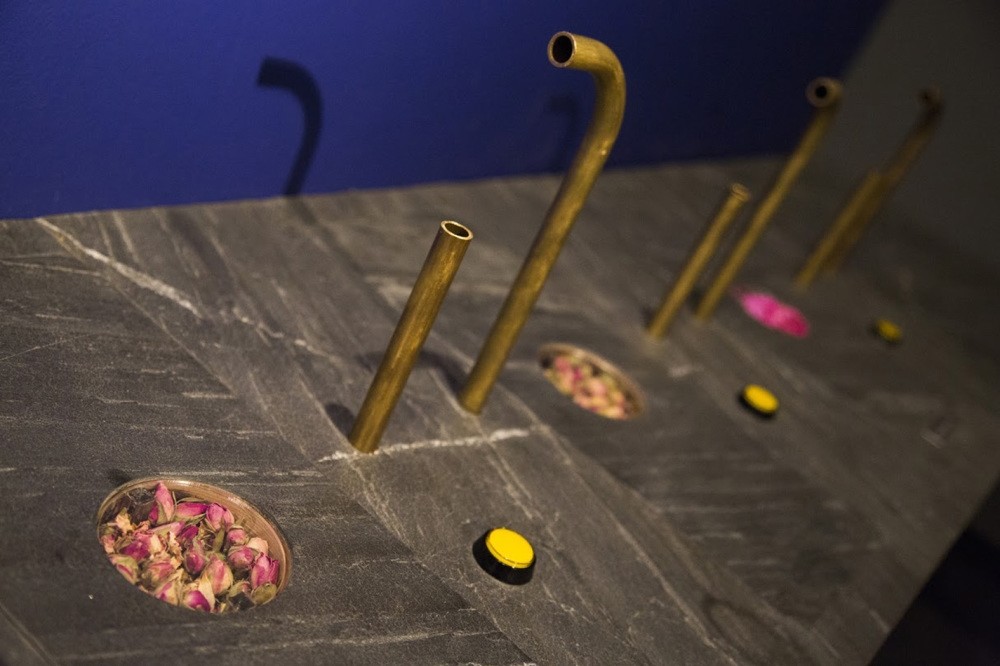 The exhibition can awaken the memories connected to the sense of smell, allowing you to discover the past and present smells of Istanbul and Anatolia. The role of the scents used in the Hittite, Roman, Byzantine and Ottoman civilizations are revealed in the exhibition.

The modern and what we know as traditional diverge by their smells. Modernity drives nature into a corner. Citrus and floral smells manufactured in laboratories have invaded our lives and some natural scents are passing into oblivion. Smells have a deep impact on language as well, made apparent in idioms referring to "wake up and smell the roses" (see reality) or various proverbs that reference the senses in symbolic language. In Turkish and English, there are so many the idioms and proverbs regarding scents; for example, "smelling fishy" refers to something that is dangerous or evil, whereas the olfactory perception of the phrase is connected to the sense of danger. 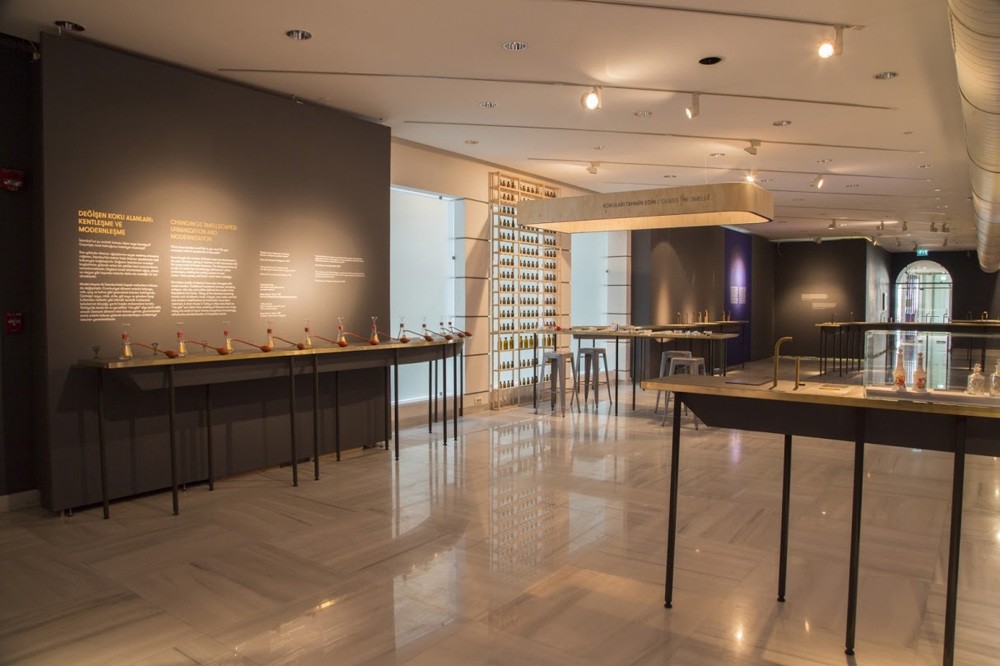 The exhibition titled "The Scent and The City" in the Research Center for Anatolian Civilization that began on April 14 introduces you to the secret world of scents. As you enter the exhibition hall, you are bowled over by what you see that you certainly did not expect to see before. At the entrance, scientific videos and texts welcome you, explaining the role of smells in our lives, especially related to human memory, how we detect smells and why some smells are "good" and some are "bad." The exhibition can awaken your sense and memories of smell, allowing you to discover the past and present smell-scrapes of Istanbul and Anatolia. The role of the scents in the Hittite, Roman, Byzantine and Ottoman civilizations are revealed in the exhibition, which also brings to light different cultures through fragrances used for various cultural occasions and addresses the spiritual effects these scents have on humans.

You will not only experience the pleasant scents that you have never before experienced in their fullest, namely rose, oud, amber, musk and Turkish coffee, which are the scents of cold-city culture. Scents like naphthalene, soft soap (Arabic soap), sulfur and even urban-inspired scents like car exhaust. The scents of saffron, frankincense and agar wood are juxtaposed with modern-day scents such as cologne, the scent of the linden tree and burning coal to display historically significant scents and their history. The variety of spices in Istanbul's Spice Bazaar and merchant opportunities to smell them is also available. Having a chance to smell the difference between rosewater and rose oil is a good opportunity. Scented postcards and different perfume and cologne bottles also make the exhibition attractive. There is also a game that you try the guess the names of scent and make your own perfume. One of the favorite places is reserved for a special form of Buhur Suyu (a special kind of Ottoman incense water) that was used in Topkapı Palace more than a hundred years ago. You will find also the exact recipe for Buhur Suyu from the notebook of Çamaşırcıbaşı Yusuf Ağa founded in the archives of Topkapı Palace, which date back to 1708.

The curator of the exhibition, Lauren Davis, is a doctoral candidate at Koç University, writing her dissertation on the relationship between the senses and intangible cultural heritage. After working in several museums across the world, she became involved in a project funded by the German Academic Exchange Service (DAAD) to increase intercultural communication through the digitization of Islamic material culture and the creation of modes of dissemination, which will include educational modules and exhibitions. Davis told us that her research interest is the changing history of scents. "I have been working on it for years," she said. "I did early history projects on the Spice Bazaar, and spoke with sellers and tourists as well as locals asking them to recall memories regarding smells and how smells have changed in Eminönü, a district in Istanbul. I asked them to recall their personal history. I enjoyed simply wonderful stories, memories and ideas regarding the impact of scents on Istanbul as a city. I wanted to share that with everyone else, so I decided to create this exhibition."

Inseparable opposites: The goat and the laden

Davis said they conducted extremely thorough research for the exhibition. She explained her two favorite smells as well. "I have two favorite smells," she said. "The first is a combination of goat and laden. The other one is 'buhur suyu' because it is made by a chemist. The chemist made it according to a recipe found in the Topkapı Palace archives. It hadn't been made for at least 450 years. This is the first time people smell buhur suyu in Topkapı Palace. I love the goat and laden smell because there are lots of cultural codes about goats in Anatolian territory. It is the best scent in the world. Goats eat the laden flowers and the resins of laden called 'labdanum' taken from their beards. Strangely enough, you can take the best scent of the world out of goat, which is internationally deemed evil." Davis wants to add additional smells if she has the chance to hold the exhibition again. Aiming to widen the scale of scents, she plans to focus on smells of places like the metrobüs, Karaköy Harbor and Beyoğlu's Tünel. The exhibition may be held in Ankara and Antalya too.

A fragrant trip back to childhood

The exhibition presents one of the most amusing experiences by allowing visitors to sample different scents. One of the visitors said his memories of childhood were reawakened: "We came here because the exhibition was about a city. We experienced wonderful things related to scents. The scent of coal and naphthalene in particular brought me to the house of my grandmother. We can understand the transformation of the city through smells. From the smell of sack to coal, from musk to cologne and lavender, there is broad perspective here." He said he could not guess the names of all the smells in the exhibition. After rediscovering some of the scents that were familiar to him and he learned about many smells that he did not know before, he added: "I tried to guess them by closing my eyes, but I couldn't. This shows us to what extent our perceptions are closed to in urban life. When I go to the Egyptian Bazaar, I will be able to be more attentive than in the past. Children can be brought here to educate them about the scents. We congratulate those who contributed to the exhibition." Another visitor said natural scents attracted his attention the most. "I liked the rose the most. There are bad smells too. So, the value of good ones comes to light with the bad ones when they are compared," he said.