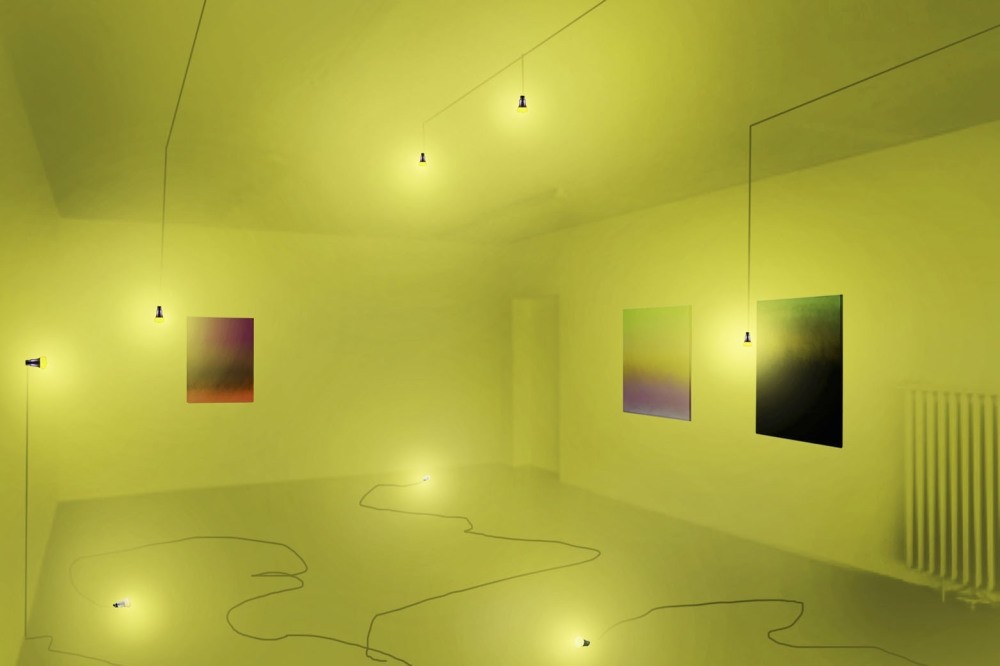 New York-based artist Mika Tajima has opened a light exhibition that scrutinizes how technology has evolved to control the body. The exhibition is decorated with paintings and a live stream

Presented by ProtoCinema, the unique, real-time light installation exhibition of Mika Tajima titled, "Emotion Commune," will address the question of whether technology enables us to have more control with less freedom. The globally networked lighting system currently displayed at the Istanbul Textile Traders' Market (İMÇ) illuminates the storefront of Protocinema at İMÇ and is open to visitors until July 2. 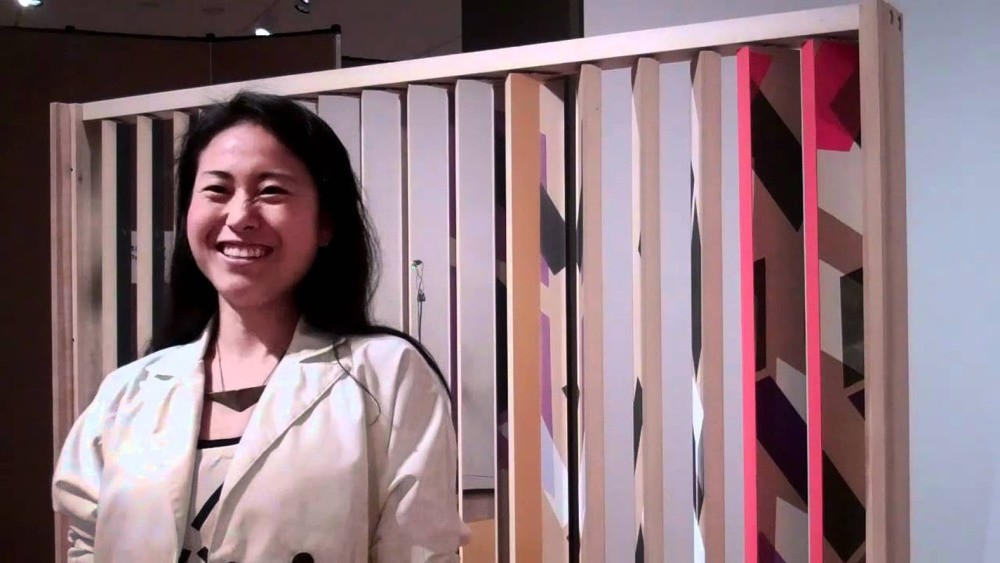 "Technological infrastructure is widespread and global. It involves someone tweeting in New Songdo, South Korea, a server in New York City to process the tweet as light color information, and a server somewhere else in the world to instruct the bulb in Istanbul to become a specific color, all in real time," Tajima said about her inspiration.

Tajima, a contemporary artist who makes use of everything from posters to illumination and spaces to create her art, has been displayed at various art galleries and contemporary and modern art museums including the Centre Pompidou in Paris, the San Francisco Museum of Modern Art, the South London Gallery, the Whitney Museum of American Art and the Mori Art Museum in Tokyo, along with her solo exhibitions that were held mostly in the U.S. The "Emotion Commune" exhibition consists of transparent paintings and a live data stream in which Tajima examines how technologies that were developed primarily to control the body are now being integrated into our senses and our spaces. 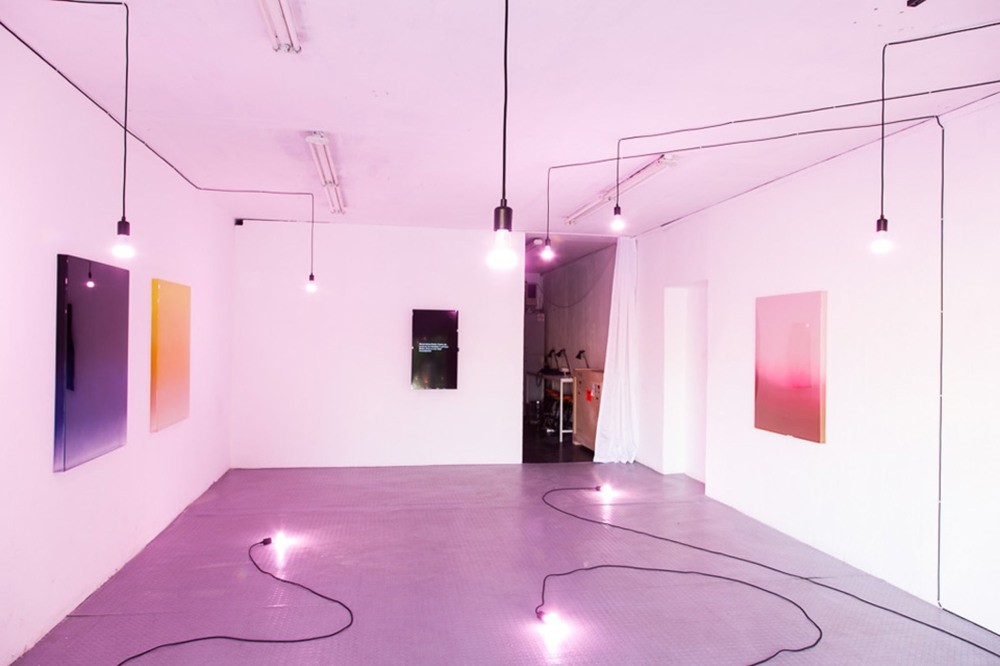 Daily Sabah discussed the concepts and issues surrounding her current exhibition as well as how she came across the "smart city" initiative of the Istanbul Metropolitan Municipality (İBB) in 2015, which is why Istanbul is now hosting her creative artwork.

Daily Sabah: Was there a single inspiration behind the concept of your new exhibition; for instance, any new technological developments in particular?

Mika Tajima: Perhaps the single inspiration for the exhibition was a question regarding the role of technology and control in our society. In the pursuit of technical quality of life, do we sacrifice different possible ways of living? I see my work in the exhibition as an examination of technology itself and how we are governed; specifically, how technologies are inseparable from power and interests that seek to shape an outcome, a body and a society. That is why I have been interested in architecture, office design, ergonomics, fitness and self-care as subjects in my research as well as art work. These are sites in which different types of technologies are employed to maximize activities and life. My interest is in unpacking the relationship between technology and a culture of maximization, which is often tied to there being greater control placed on us and less freedom. Through my research, I found that in 2015, the Istanbul Metropolitan Municipality created a "smart city" initiative by joining an international consortium of state and corporate entities to integrate technologies that seek to streamline city operations for citizens and enhance crisis and disaster management, including civil unrest. That means a certain type of technology has been adopted by the city that would affect all citizens in a very specific way. These "smart city" initiatives are always implemented in the name of "quality of life." I was interested in this argument and reason - also questioning a technology that is implemented on citizens from above.

For "Emotion Commune," I had Istanbul specifically in mind when the show was in the infancy stages, which was confirmed by my visit to the city. In thinking of which city I would connect with the exhibition, I wanted to choose a city that was both far from Istanbul and also similar in terms of specific technological conditions shared by the two. I chose New Songdo in South Korea as the "light source" for the exhibition because it is touted as the model of a fully integrated "smart city" of the future - built from scratch with only a master plan. By linking these two sites and cities, I was hoping to create a space and image of the "emotion commune" of people living in a transformational city space.

DS: How were the pieces put together? You said, "The installation employs language-processing technology that uses computer algorithms to interpret data gathered from thousands of Twitter feeds per second using software to detect human emotion." Can you tell us a bit more about the technology behind the exhibition?

MT: Technological infrastructure is widespread and global. It involves someone tweeting in New Songdo, South Korea, a server in New York City to process the tweet as light color information, a server somewhere else in the world to instruct the bulb in Istanbul to become a specific color, all in real time. The color of the lights respond in real time to the aggregate sentiment of citizens in New Songdo, considered to be a template for urban futurity in which the entire environment is embedded with computational technologies that provide urban management and regulation. The Wi-Fi-enabled "smart" lights that I use in the Meridian light sculptures draw on this very technology. And in this way, it brings the exhibition space into the network of "The Internet of Things," a technology that seeks to integrate physical objects in the world with sense and data-gathering technologies.

DS: Smart technologies process human emotions and reactions as mere information/data to be collected, processed and classified. What is your take on the future in this sense? Where do you think these new technologies lead us, how will our daily lives be shaped and more importantly, what is their effect on the creation and perception of art?

MT: I'm interested in how technologies can open new ways of life - meaning how it can enable a multiplicity of being that is free and ungoverned. This could be mean choosing not to be connected or measured and if you choose to use technology for yourself as a tool for autonomy to determine one's quality of life. At this point, smart technology represents only one way of being, one that is integrated, connected, rationally controlled and implemented from above (state, corporations, etc.). With this exhibition, I would like to explore how we can globally and locally commune through expressions that are ungoverned and not coerced.

DS: The cities inspiring your spray enameled paintings, which have adopted smart environmental technology, are located on three different continents. Do you believe, both in terms of art and the use of digital or smart technologies, that the world literally has become connected?

MT: I believe there is a connectionist logic that dominates society and technology. Yes, parts of the world are more connected, yet there are parts that are very much "offline" and lack access. These boundaries follow traditional division lines of power and capital. If you look at the global usage map of Facebook, for example, you see this intense separation.

DS: So, is it your first time in Istanbul? What are your expectations, how do you believe the exhibition will be received? What were the preparations like at İMÇ? How well did it suit the concepts you tackle at this exhibition?

MT: When I visited Istanbul, I was inspired by the context and history of the site - of a place once built for modern commerce and now functions as multi-use structure that includes an art gallery. The Meridian light installation at Protocinema essentially transforms the entire space into a lighting appliance, one that emits vibrant and shifting colored light to create different affective zones within the environs of the Istanbul Textile Traders Market. The space becomes a lamp that affects its surroundings, broadcasting distant emotions that have been analyzed, computed, and transformed - not pure emotion but a mediated one.
Last Update: Jun 04, 2016 12:02 pm
RELATED TOPICS