In first solo show, artist focuses on the art of 'Looking' 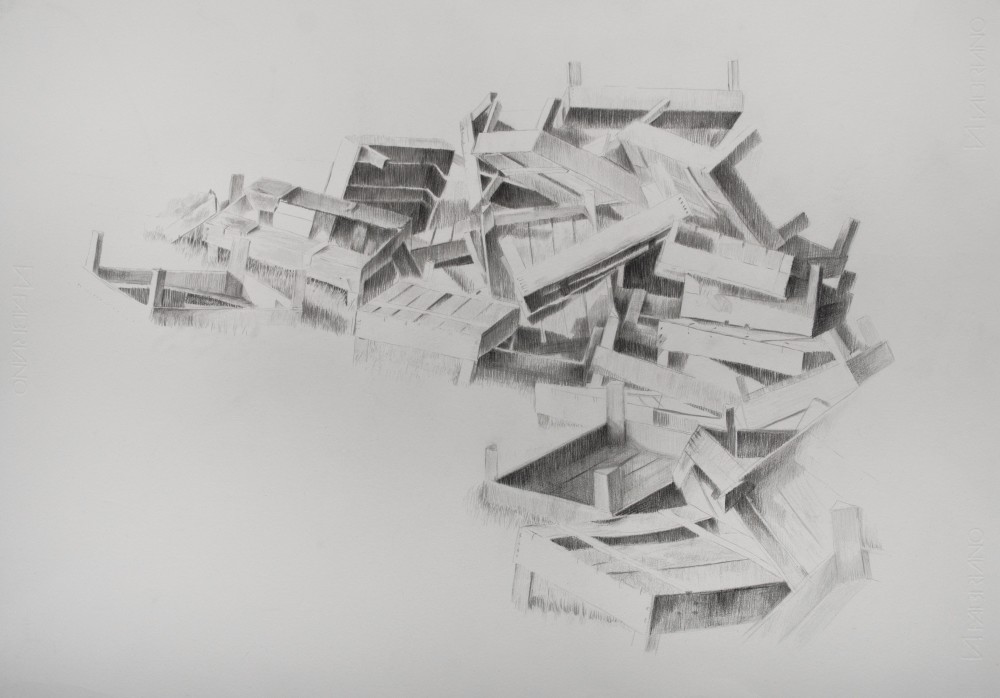 I like to visit exhibitions that are completely devoted to drawings. Istanbul's gallery goers know that such shows do not come very often. So I was in a cheerful mood last week while I made my way to the Depo gallery in Tophane - a former tobacco warehouse known as Tütün Deposu - to see İlhan Sayın's beautiful exhibition, "Looking," which runs until July 3.

Near the entrance of the gallery I came across Sayın's drawings of men combing their hair, girls wearing ill-fitting shoes and views of empty woods and wooden boxes. I stopped to take in the view of a sea that seemed so desolate that it was depressive. But I also saw something that filled me with a strange sense of warmth and familiarity, a stack of old car tires.

"The first solo exhibition of artist İlhan Sayın, whose works were previously displayed in various group shows and used as illustrations on many book covers, will be hosted by Depo," the exhibition catalogue says. "The solo exhibition, titled 'Looking,' will include the series of drawings produced by the artist over the last two years. The drawings depict landscapes which include natural forms and details about pastoral scenery along with artificial and/or abandoned objects. Familiar landscape views suddenly intertwine with the images of abandoned cars tires, crates, mattresses and even plastic water tanks."

"Unmediated" is an adjective used to define Sayın's works that represent a certain sense of spontaneity. "Drawing is an important form of expression for its capacity to enable particular visions to be conveyed from an almost unmediated perspective, thus letting the viewer witness the artist's moods, sensibilities or limits of sensibilities. On the side of the artist its significance largely relies on a certain sense of rapid reflection and creation."

Born in Istanbul in 1971, Sayın is a graduate of Mimar Sinan University's Sculpture Department. In the past two decades, Sayın had shown his works in a number of group exhibitions, from Sabancı University's Kasa gallery to the now defunct but once great art spaces like Hafriyat Karaköy and Galeri Splendid, his works had been a constant presence in Istanbul's art scene. In 2004, Sayın showed his works in the exhibition, "A Modern Hamam Project" at Stockholm's Kulturhuset. Finally, we get to see his works in a solo exhibition this summer.

In his Depo show, Sayın focuses on a number of questions: "Is it necessary to ascribe our own state of mind to the landscape? Is it possible to empathize with the spoiled landscape and, hence, nature? Or is it always, more or less the same thing happening when we look at the landscape and its representation?"

In Europe, the nineteenth century was the golden age of landscape painting. The romantic landscape tradition explored the subject of the 'sublime': vast images of wild nature that inspire feelings of terror and awe in the viewer had spread along the canvases of artists in Europe and America.

Such a perspective brought to the fore the issue of looking which Sayın's works subtly explore in this exhibition. For the nineteenth century, noblemen and women who embarked on grand tours and traveled to the Alps such sights were common knowledge. Artists like Friedrich captured those travelers in a pose of looking at nature in awe. Nowadays, in the age of selfies and obsession with self-portrait, such views of nature are a bit forgotten.

"The passion caused by the great and sublime in nature, when those causes operate most powerfully, is astonishment," Edmund Burke wrote in his classic 1757 treatise, "A Philosophical Inquiry into the Origin of Our Ideas of the Sublime and Beautiful", adding: "and astonishment is that state of the soul, in which all its motions are suspended, with some degree of horror. In this case the mind is so entirely filled with its object, that it cannot entertain any other, nor by consequence reason on that object which employs it. Hence arises the great power of the sublime, that, far from being produced by them, it anticipates our reasoning, and hurries us on by an irresistible force. Astonishment, as I have said, is the effect of the sublime in its highest degree; the inferior effects are admiration, reverence, and respect."

My favorite work in Sayın's show depicts a life guard tower which stands lonely among the waves washing along a deserted beach. The image is filled with feelings of obscurity and danger: what has happened here, one wonders, has someone just died on this beach? Where is the life guard? Is it winter? Where did everyone go? Those questions about 'what happened' lead to a second set of speculative ones: 'what can happen here in the future?'

"To make anything very terrible, obscurity seems in general to be necessary," Burke wrote. "When we know the full extent of any danger, when we can accustom our eyes to it, a great deal of the apprehension vanishes. Everyone will be sensible of this, who considers how greatly night adds to our dread, in all cases of danger, and how much the notions of ghosts and goblins, of which none can form clear ideas, affect minds which give credit to the popular tales concerning such sorts of beings."

This way, darkness and obscurity become tools of control, providing the artist with a great advantage and power over the viewer. Burke writes about ceremonies held "in the bosom of the darkest woods, and in the shade of the oldest and most spreading oaks" -those events owed their power to their obscure settings. It is precisely this power dynamic, what Burke refers to as "the secret of heightening, or of setting terrible things ... in their strongest light, by the force of a judicious obscurity," that Sayın's landscapes explore in this intriguing show.