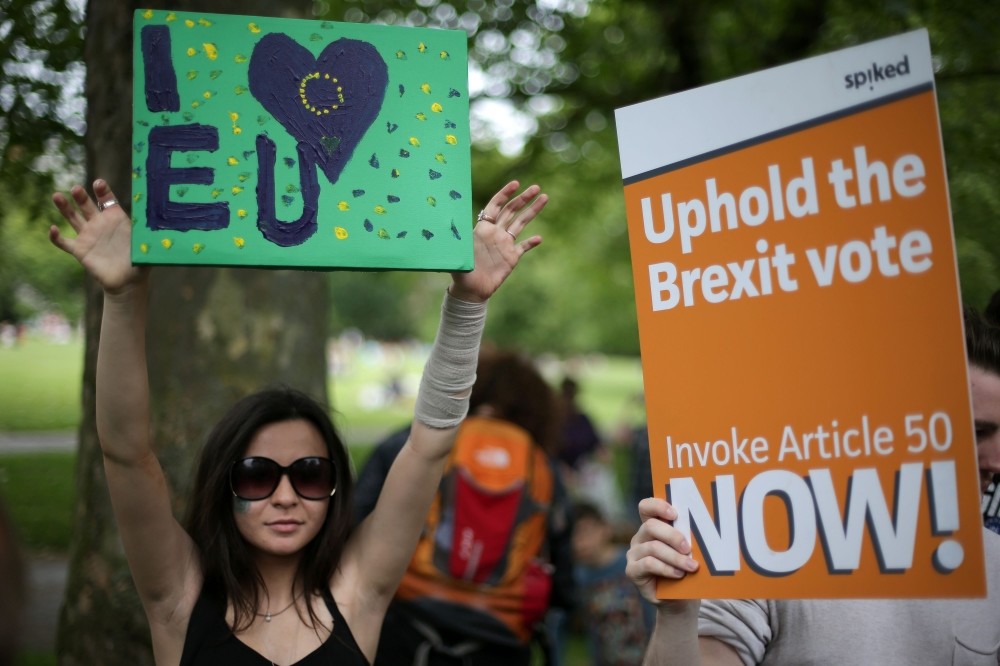 by Jul 11, 2016 12:00 am
Britain's thriving arts sector is in despair about the vote to leave the European Union, fearing that funding cuts and restrictions on freedom of movement will have serious consequences.

In the aftermath of last month's referendum result, performers and fans at the Glastonbury festival formed a heart in a pro-EU flash mob, while musicians gave a spontaneous performance of Beethoven's "Ode To Joy" – the EU anthem – in central London.

"I had a horrible dream in which I found out on a train that the Brexit vote had won, and yelled out in fury," top British cellist Steven Isserlis told Classic FM radio. "I woke up, was relieved that it had been a dream, switched on my computer and saw, to my horror, that the dream had come true."

Top choreographer Matthew Bourne added that he considered the result to be "such a mess and not about the GB (Great Britain) I know and love." While it is too early to know the precise impact of Brexit on sectors from music to cinema, museums to theatre, most insiders are united in their pessimism. Norman Lebrecht, a leading cultural commentator who runs the Slipped Disc classical music website, said freedom of movement has had a "regenerative" effect on British orchestras, as talent from across the EU had joined them.

"The whole atmosphere of orchestras has been changed by this. If you're going to turn the clock back... I think you face stagnation," he told AFP. Lebrecht also predicted that plans for a new concert hall to house returning British conductor Simon Rattle and the London Symphony Orchestra could be axed due to a lack of investment post-Brexit.

John Smith, general secretary of the Musicians' Union (MU), a trade union for 30,000 professional musicians, said his initial reaction to the vote was "profound depression," saying, "Over the years, MU members have benefited from open borders, a protective copyright regime and various directives which directly benefit them in their workplaces."

Then there are the grants which many sectors receive from the EU. Cinema has been a particular beneficiary, with funding from the MEDIA program for Britain's film, TV and digital industry totaling nearly 130 million euros ($145 million) since 2007. Oscar winners "Slumdog Millionaire" and "The King's Speech" received distribution assistance from the fund. Rebecca O'Brien, a film producer who set up London-based Sixteen Films with director Ken Loach, said the loss of distribution support would be a major blow. "We're talking about local films that are made by British filmmakers – they are the most affected and the funding that comes in to pay for the American blockbusters, they can carry on fine," she told AFP. European support has nurtured a fruitful crop of independent British films in recent years, she added. "You can make a film in Britain without European participation, absolutely you can, but it really, really helps," O'Brien said. "Certainly in terms of the more innovative, creative productions, they've all been European partnered." O'Brien, who supported the "Remain" campaign, was hopeful that filmmakers would find a way to cope but added that Brexit would "put hurdles in the way" of the already complex process of making a film. Many also fear the uncertainty surrounding Britain's future status until it actually leaves the EU. The process is likely to take at least two years, a long time for a cluster of industries where projects require months or even years of advance planning. Michael Ryan, chairman of the Independent Film and Television Alliance, which represents independents in cinema and TV worldwide, said the decision was a "major blow" to the creative sector. "Producing films and television programs is a very expensive and very risky business and certainty about the rules affecting the business is a must."
RELATED TOPICS