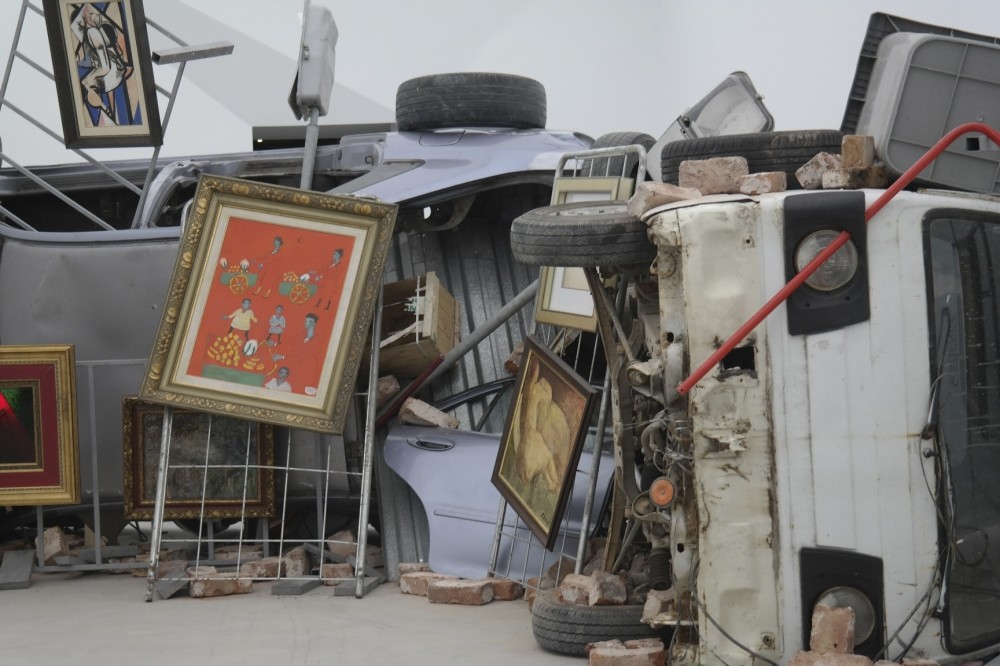 Works by Marwa Arsanios, Ahmet Öğüt, Allora and Calzadilla can be seen in exhibitions of sculptures, videos and installments at Alt art space in Bomontiada this summer. Speaking to Anadolu Agency prior to the opening, Alt curator and director Mari Spirito said the preparation process for the exhibition was highly personal, organic and long. She said: "I have been working in the field of art for 25 years and following artwork worldwide for years. I like making connections between artists; I like following their works, making connections, observing the concerns of artists and people and hearing different sounds. I think the artists here have very powerful sounds, and it is very reasonable for them to be here. A dialogue can be established even in an ordinary exhibition."

About Arsanios's "Notes, Texts, Annotations or How to Read While Walking" exhibition, Spirito said she has known Arsanios, who has been engaged with the topic of women writing history and history writing women in the Arab world, for a while. "I like the idea of 'sharing information' in her works. She also shows empathy. I think it is a very appropriate time for it."

Featuring Arsanios's video, "Have You Ever Killed a Bear?" or "Becoming Jamila," featuring Jamila Bouhired, an iconized freedom fighter from Algeria, the exhibition will display the artist's "Olga's Notes, The Library" as well.

Explaining that she met Öğüt of the "Round-the-clock" exhibition when he first came to Istanbul, Spirito said: "He was one of the first artists whom I met in Istanbul. Time has passed. His works have improved and changed. I think Ahmet is one of Turkey's best artists. He has a personal sensitivity."

Spirito said that she has known the creators of the "The Great Silence" exhibition, Allora and Calzadilla, since her first days in New York, and added: "This duo have been one of the artists that have inspired me the most for many years. Their idea in the video installments "The Great Silence" and "Apotomé" is that if you communicate with aliens or other beings through sound and you want to give them messages such as "take care of yourself" or "I love you," this would be very poetic and nice, and it is a good time for these types of reflections."

Featuring Arsanios's video, "Have You Ever Killed a Bear?" or "Becoming Jamila," featuring Jamila Bouhired, an iconized freedom fighter from Algeria, the exhibition will display Marwa Arsanios's "Olga's Notes, The Library" as well. Arsanio has been engaged with the topic of women writing history and history-writing women in the Arab world, for a while. Her exhibition "Notes, Texts, Annotations or How to Read While Walking" features the idea of "sharing information" in her works.

Discussing the works in the exhibition, assistant curator Gökcan Demirkazık said: "Arsanios' work 'Becoming Jamila' is one of the pieces from the Al Hilal project. Its point of origin is a freedom fighter named Jamila Bouhired. She was a female warrior who became one of the icons of the Algerian War of Independence, and she is one of the rare women who gained this status. The video installment you watch here takes place in Algeria."

Regarding Öğüt's work at the exhibition, "While Others Attack," "For Six Months," "Light Armored" and "Bakunin's Barricade," Demirkazık said that "Bakunin's Barricade" was previously featured in the Van Abbemuseum. Pointing at pictures in the work reflecting a barricade used during street protests, Demirkazık said while works by famous artists such as Picasso were previously used in this installment, now Fikret Mualla, Fahrelnisa Zeid, Aliye Berger and Eren Eyüboğlu's pictures, a part of the Zeyno and Muhsin Bilge collection, had been installed in his work in this exhibition.