Celebrities in solidarity with people after coup attempt 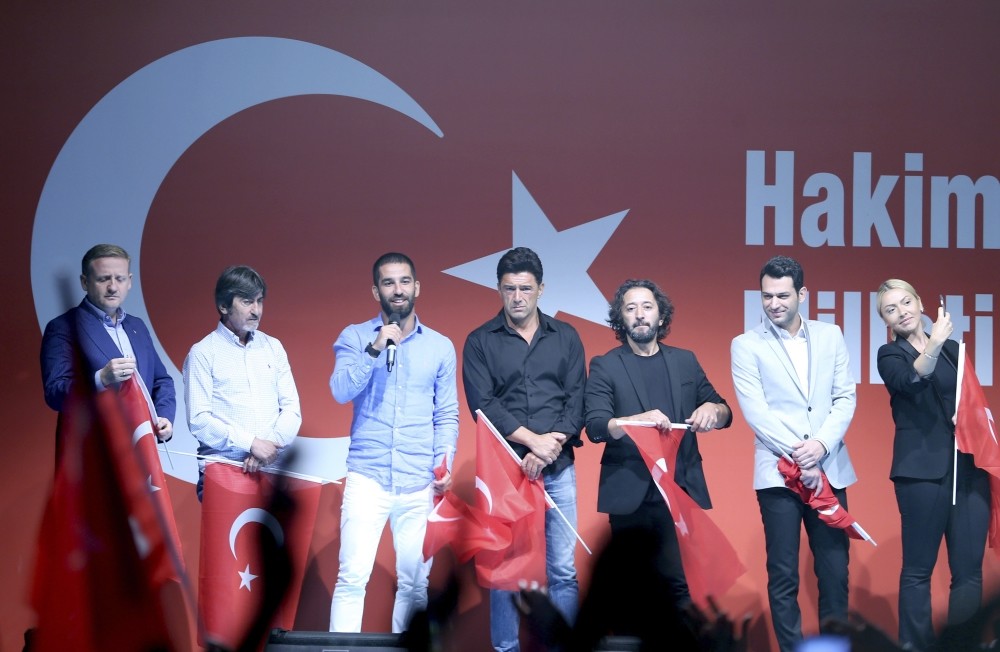 In the wake of the failed Gülenist coup, famous figures from artistic, literary and sports circles are continuing to show resistance against the coup attempt and solidarity with the will of the government

On July 15, Turkey saw a heinous coup attempt plotted by the Gülenist terrorist organization, (FETÖ). The people showed great resistance to the military and since that night they have been on the streets to protect democracy. While the people supported the government against the military coup attempt, singers, writers, actors and sportsmen have also showed solidarity.

Yesterday night, people gathered on the Bosporus Bridge with many famous figures getting involved. Producer and TV personality Acun Ilıcalı, singers Hadise and Fettah Can, along with actors Murat Yıldırım and Hakan Ural addressed the people who were in Kısıklı for "democracy watch."

Acun Ilıcalı said, "I am very proud to be here. We have been listening to and reading heroic stories throughout our lives, but I would never think that we would experience such a thing. God bless all the martyrs who died during this fight and wish the injured a quick recovery. I also express my gratitude to President [Recep Tayyip] Erdoğan who became an example with his firm stance and leadership. Martyrs are immortal, our land is indivisible."

"I am very proud to be among you. I offer my condolences to the families of martyrs who sacrificed themselves for our country. We are going through tough times but we are the children of a strong nation. I am sure that we will get through this. I love you all and I thank President Erdoğan for protecting and loving us," singer Hadise noted.

Actor Murat Yıldırım said, "First off all, I want to say that I hope we will get better sooner. According to our faith, everything will turn out to be okay even if bad things happen. The veins that carry blood to Turkey's heart were blocked by these traitors, but thank God they are opened again. No one should bend their necks. I offer my condolences to the families of the martyrs. On Friday night, Turkey was saved with an operation. God willing, such things will never be experienced in Turkey again."

Turkish footballer Arda Turan, who plays for Barcelona, participated in the democracy watch in Kısıklı on Thursday. He addressed the hundreds of people waiting in Kısıklı and said, "I offer my condolences to the martyrs. We are a noble nation and you are all heroes. You are the real heroes because you fought for the democracy of our country. Everybody from seven to 77 is here. This suits my nation the best. You acted to honor your leader. We are Muslims; we will be dark as night to cover the shame that is done to us; we will unite. We will keep this democracy alive along with our President, Erdoğan. I thank President Erdoğan and you all for being able to fly this flag."

The three biggest sports clubs in Turkey - Galatasaray, Beşiktaş and Fenerbahçe - published messages supporting the elected government against the failed coup attempt that took place on July 15. Moreover, former Galatasaray footballer Brazilian Felipe Melo showed support to the Turkish people, saying, "Turkish people do not deserve this. My prayers are with you" on his Twitter account.

LITERARY WORLD AGAINST THE COUP ATTEMPT

The Writers Union of Turkey released a statement following the failed coup attempt. The writers, who produce literary works in different genres, wrote up a statement to condemn the coup attempt. The statement says, "As the writers who are the witnesses and consciousness of their time, we came together to state that we condemn this vile attack and stand by President Erdoğan who was elected by the will of the Turkish nation and elected ministers. We are aware that the real statement is written by the nation itself. We, the members of this noble nation, want to record that we witnessed the heroic actions of the Turkish nation and the cruelty imposed on our country by the members of FETÖ. We named our statement 'Witness'."

The Magazines Association of Turkey and World Periodicals Union also released a statement condemning the failed coup attempt orchestrated by FETÖ. The statement, titled "This is our statement against dishonor," indicated that publishers, editors, writers and all those who sweat for the sector are against the "dishonorable, raving, cruel and vile coup attempt" launched on July 15, targeting the will of Turkish citizens. The statement also underlined that the coup was repelled

by those who did not hesitate to stand against the tanks with their bare hands. The statement continued, "We salute the people of Turkey who made history by standing against the enemies of freedom by paying the ultimate price. We hail our precious nation who did not allowed the junta - the pawns of dark forces - and ran to the squares to protect the freedom and order. We are grateful to the martyrs who did not hesitate to give their lives for their country and will pass down on to the history as the people that will purify the earth with their pure blood."

TV SECTOR IN SOLIDARITY WITH GOVERNMENT

Birol Güven, the producer and scriptwriter of the TV series "Seksenler" (The '80s) which is broadcasted on the Turkish Radio and Television Corporation (TRT) channel and the entire cast of the series responded to the coup attempt orchestrated by FETÖ members via a video that was shared on social media. The video was shared on Twitter with a message saying, "The entire cast and production team of 'Seksenler,' which tells of the suffering of the 1980 coup, is against all types of coups." Güven, on the other hand, said that he is currently abroad and continued, "We are thousands of kilometers away from our country but we are part of a huge solidarity movement. Now, we have to hug each other firmer than ever. We are grateful to the people who stood in front of the tanks for the unity of our country as well as the future of our children. We can never repay them."
Last Update: Jul 23, 2016 10:44 am
RELATED TOPICS