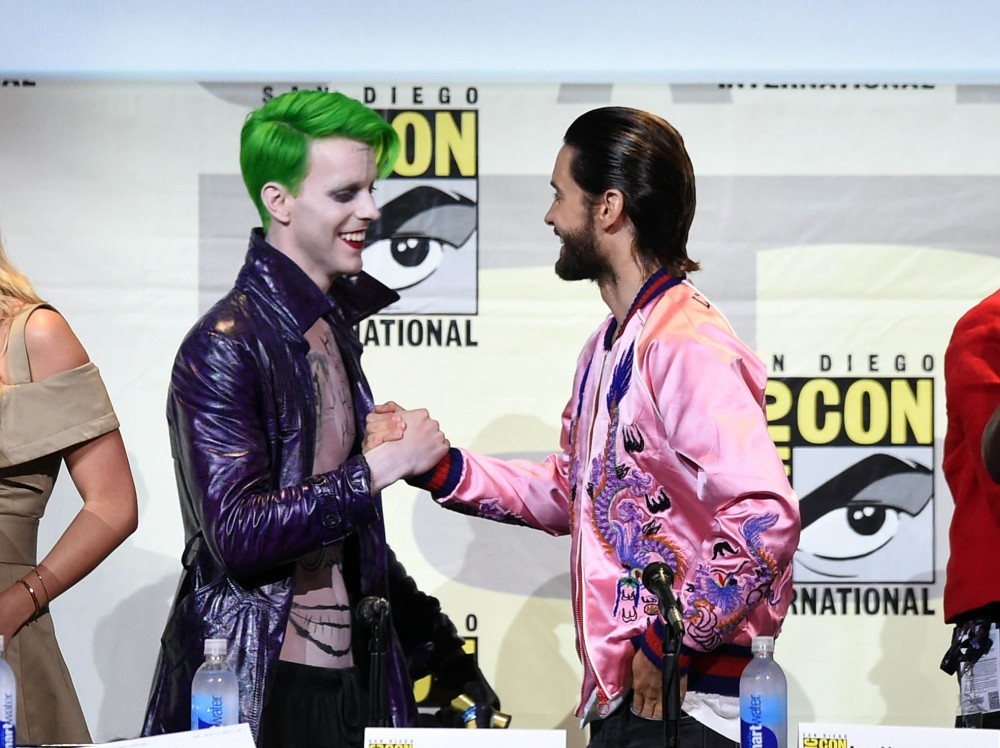 by Jul 25, 2016 12:00 am
Two of Hollywood's biggest studios went head-to-head at San Diego Comic-Con on Saturday in an epic battle to demonstrate which has the best upcoming superhero movies.

Warner Brothers, still smarting from the lukewarm reception to "Batman v Superman: Dawn of Justice," presented a star-studded lineup ahead of Marvel's showcase later in the day. Its first exclusive of the session was a sneak peek at "Wonder Woman," which saw Gal Gadot's Amazonian princess leaving her lush island to stop World War I. Due to hit theaters on June 2, 2017, it focuses on the one character to escape criticism in "Batman v Superman," which chalked record drops in box office revenue after a strong opening week in March. "She has the heart of a human and the strength of a goddess," a visibly trembling Gadot told the Comic-Con devotees of her character. Margot Robbie's comic book baddie Harley Quinn is one of the most hotly anticipated characters among all the films due to emerge from Warner's DC Extended Universe. Fans cheered as they were shown the final "Suicide Squad" trailer ahead of its Aug. 5 release, which focused on the bubblegum-popping Harley Quinn.

"Everyone was doing all this action – I was doing it wearing heels," Robbie said of the shoot, which took place last year in Toronto and Chicago. Zack Snyder took to the stage to treat fans to an unexpected first trailer for his latest movie, "Justice League," which is due for release on Nov. 17 next year. The movie reunites all three "meta-humans" in Snyder's "Batman v Superman": Wonder Woman, played again by Gadot; Batman, played by Ben Affleck for a second time, and Henry Cavill's Superman. The joke-laden trailer is a marked contrast from "Batman v Superman," which was heavily criticized for its dark tone and taking itself too seriously. Marvel followed DC in the late afternoon, giving fans a glimpse of its ever-expanding cinematic universe after sitting out last year's convention.

Studio president and producer Kevin Feige played ringmaster, announcing: "We only want to come when we have a lot to show you. We actually have a lot today." And he did not let down fans, who were treated to new footage of Scott Derrickson's "Doctor Strange," opening on Nov. 4 and starring Benedict Cumberbatch. Mist descended from the ceiling of Hall H and the lights lifted to reveal Cumberbatch, 40, on stage in a T-shirt and jeans. Derrickson, who joined the panel alongside Chiwetel Ejiofor and Tilda Swinton, told Comic-Con the film was a "left turn in the Marvel universe," focusing on magic rather than technology. Kurt Russell drove the crowd wild when he showed up to confirm he will play Chris Pratt's father in James Gunn's "Guardians of the Galaxy Volume 2," which hits theaters on May 5 next year.

A trailer revealed for the first time that Sylvester Stallone also has a role in the "Guardians of the Galaxy" sequel.

There was additionally a surprise glimpse of "Spider-Man: Homecoming," with very early footage from the film due for release on July 7 next year showing Peter Parker played by Tom Holland. Feige brought onstage Ryan Coogler, who helmed Rocky spin-off "Creed" last year and has turned his attention to the fictional world of Wakanda for "Black Panther," due in 2018. "The coolest thing about the world of Wakanda is they have a king, and we have an incredible actor playing that part," Coogler said of Chadwick Boseman, who first took on the role in this year's "Captain America: Civil War." "I am literally vibrating inside," Boseman said as he took to the stage for his first Comic-Con. Hall H was then treated to a "mockumentary" by "Thor: Ragnarok" director Taika Waititi in the style of his vampire spoof, "What We Do in the Shadows." The crowd applauded as Chris Hemsworth was shown with a nerdy roommate who helps him send peacemaking emails to Captain America and Iron Man during their "Civil War" dispute.

Oscar-winning Brie Larson, meanwhile, got a standing ovation as she was confirmed to play the title role in "Captain Marvel," slated to open in 2019.
Last Update: Jul 25, 2016 1:30 am
RELATED TOPICS