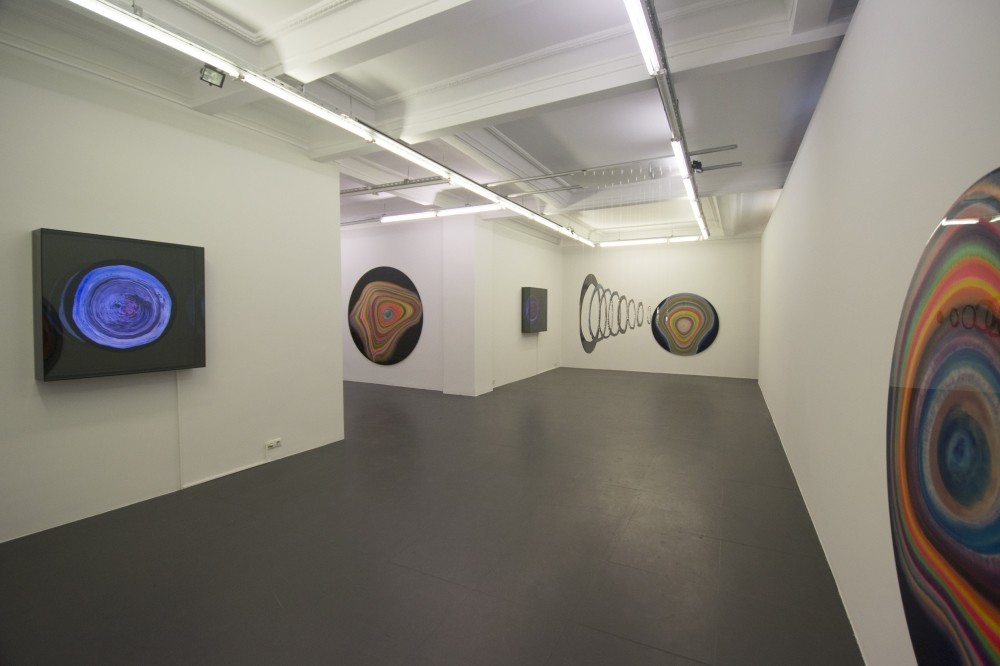 ‘Now. See or Do I?'- Emre Namyeter's solo exhibition at Istanbul's Pi Artworks gallery, features sculptures, light boxes, installations and paintings by the artist. The exhibition is open until Sept. 10

Emre Namyeter, a young Turkish artist currently studying art at Canada's Concordia University Intermedia, is a big fan of optic illusions. Namyeter's solo exhibition at Istanbul's Pi Artworks gallery is filled with works that play with viewers' expectations. For this show, he created a number of abstract compositions by using a technique he has developed over the years.

"Emre Namyeter creates abstract compositions on wooden panels by using the paint that he self-produced and adopting various pouring techniques, creates many layers," the exhibition program informs us, describing the artist's experiments with form. "After a long term of preparation, the application process is not planned ahead and develops naturally as a result of the artist's state of mind and feelings at that moment, his rhythm and movements."

Born in Istanbul in 1984, Namyeter studied advertising and photography at Istanbul Bilgi University. He focused on fine arts and moved to Salzburg where he enrolled in the fine arts program of the International Academy of Fine Arts in 2010. He went on to study sculpture and fine arts at the Academy of Arts University in San Francisco before moving to Montreal for the art program at Concordia.

"My art has always been about one fundamental idea: perception," Namyeter says in his artist statement. "Perception can be defined as a process by which individuals organize and interpret their sensory impressions in order to give meaning to their environment. So, it is because of perception I have been drawn to the understanding on how each and every one of us can understand, sense and give meaning to things differently throughout our lives."

According to Namyeter, what defines human nature is our paradigms that shape our perception by filtering reality. "These filters are influenced by our experiences throughout life as we learn about our surroundings," he argues. "As information passes through our senses, we recognize an order and link it to our personal experiences to help us define what we know to be true. However, through this process, we tend to see and understand things not as they are, but as we are."

Once you make it to the Istanbul branch of Pi Artworks, located in Mısır Apartment on İstiklal Avenue (there is also a London branch of the gallery on Eastcastle Street), Namyeter's works welcome you to a game of truths and illusions. I found myself staring at his light boxes and sculptures, trying to guess whether the work was really three dimensional or just looked like it. I came across a ceiling installation that is three-dimensional. It is designed to be viewed from every possible angle, its meaning changing as the viewer moves around it.

The optical illusions that so strongly define the show "Now. See or Do I?" have a literary inspiration behind them. While producing the three-dimensional installations Namyeter is in conversation with William Blake, a 19th century poet, printmaker and artist. This seminal figure of the Romantic Age has influenced numerous poets, musicians and filmmakers, and it was exciting to see how the poet helped shape the views of a Turkish artist.

Blake's most famous works ("Songs of Innocence and of Experience" and "The Marriage of Heaven and Hell") boldly put forward his views on ethics, religion, freedom and aesthetics. In "The Marriage of Heaven and Hell," Blake argued against the idea that man has a body distinct from his soul. In the course of the poem, Blake tries to show how body and soul are in fact indivisible: The divisions are produced by the culture of oppression. Blake says he will expunge the idea "by printing in the infernal method, by / corrosives, which in Hell are salutary and medicinal, melting apparent surfaces away, and / displaying the infinite which was hid." Then comes this: "If the doors of perception were cleansed / every thing would appear to man as it is, infinite. / For man has closed himself up, till he sees / all things thro' narrow chinks of his cavern."

"The Doors of Perception" is also the title of a 1954 essay by the English novelist and philosopher Aldous Huxley about the author's experiences after taking mescaline one May day the previous year. In this work Huxley describes the sacramental visions he encountered during the experience and reflects on their significance in a religious and philosophical context.

Namyeter seems to have dreamed of cleansing the doors of perception in a similar way so as to be able to make surfaces display "the infinite which was hid" once again. In his previous exhibitions at Contemporary Istanbul (2015), 111 Minna Gallery (2015) and at the Palace of Fine Arts (2013) in San Francisco, Namyeter experimented with new techniques to achieve this objective. "With these artworks where he manipulates light, he efficiently creates an impressive sense of depth and mesmerizes the viewer," according to the exhibition program. "Namyeter tries to reach the eternity in a way and he tries to free the optical illusion."

"I try to make each observer focus on his/her own reality by using lines, colors, form, motion, patterns, and textures," Namyeter says, "and simply create their own perception about my artwork."
RELATED TOPICS