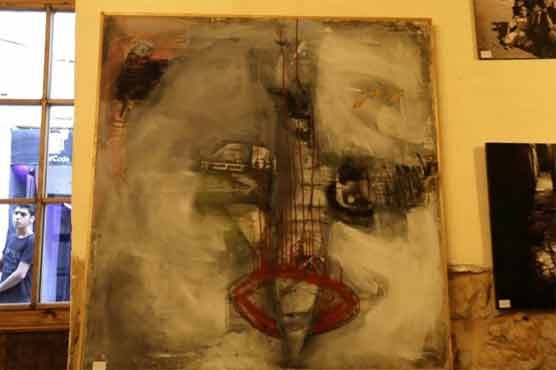 by Oct 11, 2016 12:00 am
The so-called "painter of Idomeni," a Syrian refugee and graduate of Damascus School of Fine Arts who fled war-torn Palmyra, on Sunday saw two of his paintings auctioned off in Greece. Hassan Khatib decided to sell some of his artwork to help provide for his family as they wait in Athens for their relocation request to Finland to be approved. The sale of the two paintings raised 270 euros and more are in the pipeline.

"Many people are asking for more and we are planning on auctioning five more of Mr Khatib's paintings," said Stavros Myronidis of Myro Antiques House in the northern city of Thessaloniki, adding: "We want to help this man." Khatib turned to his art while camped out at Idomeni on the border of Greece and Macedonia with his wife and four children earlier this year. The normally sleepy Greek railway post became a sprawling tent city after Macedonia closed its border to thousands of migrants preventing them from continuing their journey north to other European countries.

While there Khatib decided to paint "trying to fight the somber atmosphere with colors," he told Athens News Agency. "We left Syria to flee war and carnage and we found ourselves trapped on the border," he added. A couple from a nearby village took Khatib and his family in and the family has now moved to Athens pending their hoped for relocation.

Myronidis said Khatib visited his store three weeks ago accompanied by some Greek people who had befriended him. "He doesn't speak English and his little daughter was trying to interpret but we understood his request and decided to sell his art work without any commission."We are looking forward to organizing an exhibition with more of his artwork in the future," he said.
Last Update: Oct 11, 2016 1:38 am
RELATED TOPICS