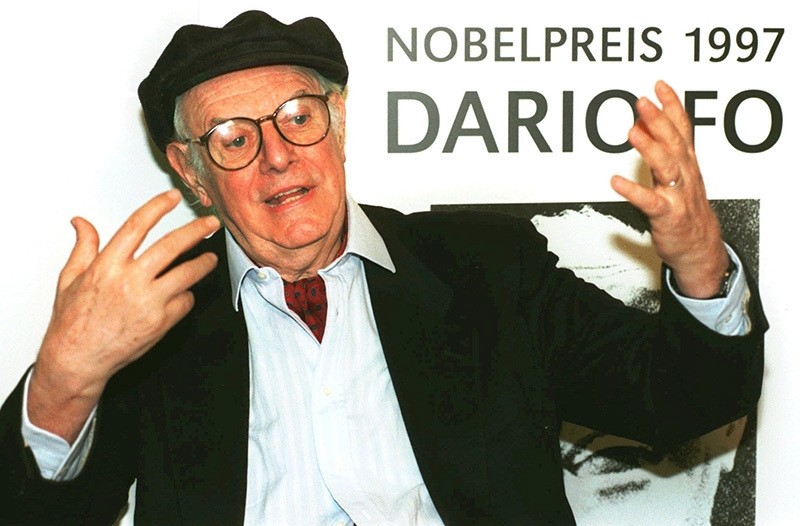 Nobel prize-winning Italian playwright, director and political activist Dario Fo, an acclaimed satirist who poked a finger in the eye of the church and state, has died aged 90, officials said on Thursday.

Famous for his cutting political satire in plays such as 'The Accidental Death of an Anarchist', Fo won the Nobel prize for literature in 1997.

He remained a committed activist right to the end, skewering Italian authorities with his sharp wit and appearing at a rally in support of the anti-establishment 5-Star Movement last month. He was admitted to hospital in Milan 12 days ago.

"With Dario Fo, Italy loses one of the great protagonists of theatre, culture and the civic life of our country," said Italian Prime Minister Matteo Renzi, who was himself regularly ridiculed by the irreverent Fo.

"His satire, his research, his work on set design, his multi-faceted artistic activity remain the legacy of a great Italian in the world."

Fo and his wife, muse and leading lady Franca Rame, captured the hearts and minds of ordinary Italians, writing and performing for stage, radio and television and regularly skewering political leaders with deft, clever dialogue.

His subversive humor won him a cult status, but also saw him periodically hounded off the stage and television in an attempt by the Italian establishment to muzzle him. He was barred from entering the United States in the early 1980s.

"The Accidental Death of an Anarchist", which brought him international fame, was based on the true story of a railway worker who fell to his death from the fourth floor of a Milan police station where he was being interrogated.

Police said he committed suicide, while Fo suggested he was killed. The play was first performed in Milan in 1970 and has since been performed in more than 40 countries.

Awarding him its literature prize, the Nobel Foundation said Fo "emulates the jesters of the Middle Ages in scourging authority and upholding the dignity of the downtrodden".

Born in a small town on the banks of Lake Maggiore in northern Italy in 1926, Fo spent his childhood following his amateur actor father who worked on the railways, and absorbing oral storytelling traditions in taverns and town squares.

He learned narrative techniques from his grandfather, a farmer who travelled the countryside telling satirical anecdotes about local news to attract customers to buy his produce.

As a student, he was called up to the army of Fascist dictator Benito Mussolini, but escaped and hid in an attic for the last few months of the war before Italy was liberated.

After the war, he turned his hand to stage design and improvised monologues.

He elicited praise and censure in 1953 for the co-written play "A Finger in the Eye" that satirized what Fo saw as historical falsehoods constructed under Fascism.

Some churches warned their parishioners not to go to see the play, which the atheist Fo described as "a satirical critique of every conceivable subject".

Fo met Rame while they were working on the same production in Milan. They married in 1954 and despite sometimes torrid relations; they stayed together until Rame's death in 2013.

"I dream every night of Franca and I dream that she is alive," Fo told Ansa news agency when he turned 90 in 2016 - an age that he said was crazy. "I still have ideas that I want to pursue, and this outrages me," he said.

Rame helped Fo write many of his plays, including his most celebrated work in Italy, "Mistero Buffo", known as "A Comic Mystery" in English, which was a collection of short scenes depicting stories from the Bible as told by the powerless.

The Vatican denounced the work as "blasphemous".

In 2013, the Five Star's leader Beppe Grillo said he should become Italy's next president, but Fo declined to have his name put forward, saying he was too old and had too much left to do.

"A giant of Italian culture has left us. He was the moral guide of the 5-Star," said Carla Ruocco, a 5-Star parliamentarian.