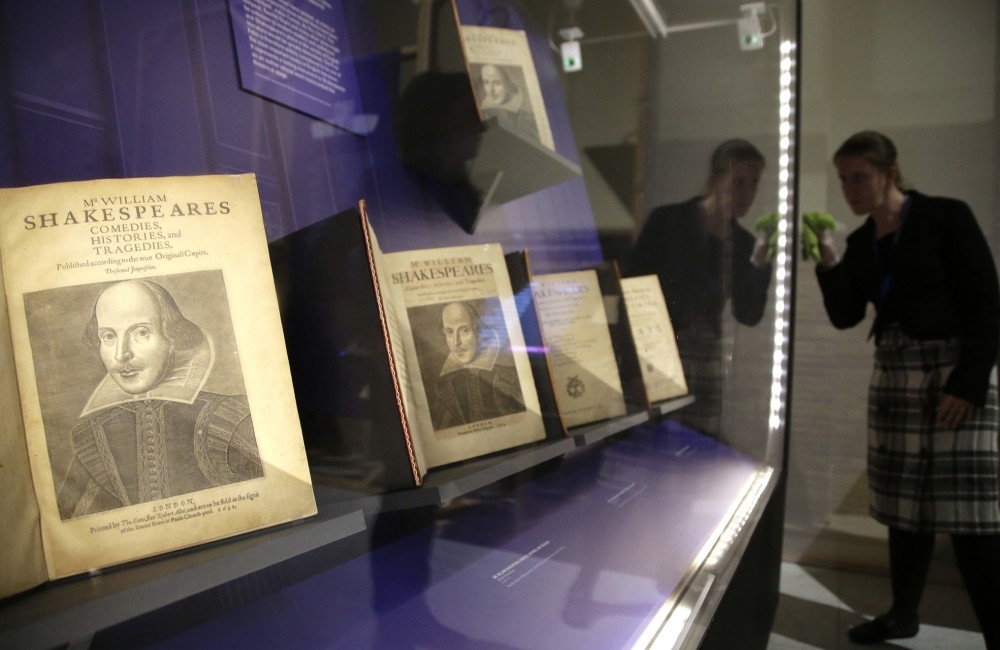 by Associated Press Oct 15, 2016 12:00 am
The public is getting a rare peak at first and early editions of some of William Shakespeare's most beloved plays.

The Boston Public Library is commemorating the 400th anniversary of the Bard's death with "Shakespeare Unauthorized," a free exhibition that opened on Friday. The library famously holds a copy of the so-called "First Folio," the earliest published collection of Shakespeare's works.

Early "quartos," or booklets for individual works like "A Midsummer Night's Dream," ''Hamlet" and "The Merchant of Venice," are also among the highlights of the exhibition.

"These are the books that all modern Shakespeare texts are based on," says Jay Moschella, the library's curator for rare books. "They're extremely valuable and we're one of the few places that has them. They're one of the great cultural treasures of Boston."

"Shakespeare Unauthorized" features roughly 60 items, a relatively modest selection from the library's sizeable holdings of original works by Shakespeare, which are considered among the largest and most comprehensive among public institutions in the U.S. The last time the library showcased these materials was 100 years ago, on the 300th anniversary of the Bard's death, according to Moschella. Most of the year, they're securely kept and made available to researchers by request. The library purchased much of its collection of Shakespeare materials —along with thousands of other early works of English literature — for $34,000 from the family of a prominent collector in 1873.

Tucked in the library's grand, Beaux Arts building downtown, "Shakespeare Unauthorized" opens with a discussion of "Hamlet" and how early versions of the seminal work differed. The famous line "To be or not to be, that is the question," for example, is written "To be or not to be, ay, there's the point" in the earliest version.

"It's not only significantly less poetic, but it's also one of the central questions of Shakespearean scholarship," Moschella explains. "Why is that text different and how does that affect what we're reading?" Elsewhere, the exhibit delves into the conspiracy theories surrounding the Bard, such as the theory that the true author of his works was the famed English philosopher and scientist Sir Francis Bacon. It also spotlights copies of notorious forgeries and works that were initially credited to Shakespeare but later dismissed.

The grand finale of the exhibition is the richly made "First Folio," one of about 230 copies still in existence. The handmade, encyclopedia-sized tome— titled "Mr. William Shakespeares Comedies, Histories, & Tragedies Published According to the True Originall Copies" — is displayed in a large glass case along with copies of later folios. An interactive screen nearby lets visitors peruse a digital copy of the over 900-page book.

Published in 1623, years after Shakespeare's death, the "First Folio" contains 36 of his works, 18 of which had never been printed before, including "Macbeth," ''Julius Caesar" and "The Tempest." "These are major, important Shakespeare works. Without these, Shakespeare would not be Shakespeare," says Moschella. "And it is a pretty safe bet that most if not all of these plays would have been lost if they had not been memorialized in the 'First Folio.'" "Shakespeare Unauthorized" runs through March 31, 2017 and is a highlight of the library's celebration of Shakespeare. For more information about the exhibition, which is sponsored by the Boston-based information storage company Iron Mountain, and other events, visit: www.bpl.org/shakespeare.
RELATED TOPICS