In Balat, an exhibition devoted to the color yellow 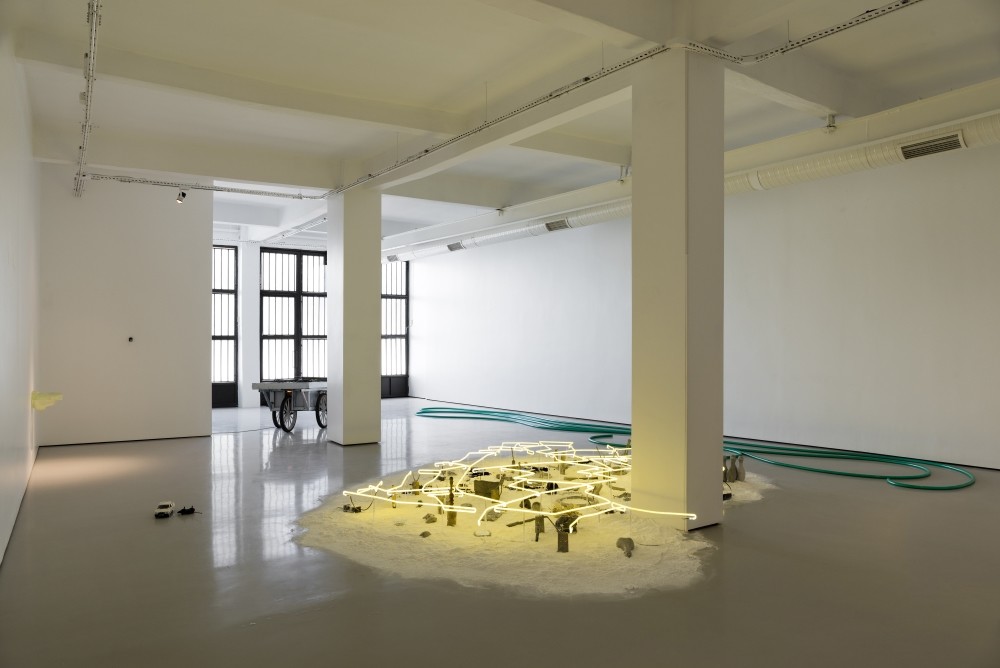 by Kaya Genç Oct 15, 2016 12:00 am
Some artists are inseparable from the colors that define their work: Mark Rothko is famous for his studies in red, Yves Klein's obsession for the color blue that his city Nice presented to him every day is well known (there is even a "International Klein Blue" named after the artist) and when one thinks about Kazimir Malevich, his "Black Square" fills the mind. Fascination with color had also been the subject of great classics: in Marcel Proust's "In Search of Lost Time," the novelist Bergotte dies at an exhibition, meters away from "View of Delft," Vermeer's masterpiece. "My last books are too dry, I ought to have gone over them with a few layers of color, made my language precious in itself, like this little patch of yellow wall," Bergotte mumbles before dying. His last words, beautifully obsessive, voice the novelist's fascination with the color yellow: "Little patch of yellow wall, with a sloping roof, little patch of yellow wall..."

I was reminded of Bergotte last week when I visited the Pill, an art gallery located in Istanbul's rapidly gentrifying Balat neighborhood. For the past few weeks, the Pill has been hosting the third solo exhibition of Deniz Gül, one of the most interesting and literary names working in the field of Turkish contemporary art today. For Gül, a show begins with a text: "5 Person Buffet," her 2011 show at ARTER, featured her book of the same title. Intended to be performed by five people, Gül's text introduced the reader to five pieces of furniture (a vitrine, a closet, a safe, a coffin and a door turned into a room) representing five characters that embody them.

So there was little surprise to see Gül's third solo show "Loyelow" combine these characteristics: the book and objects that not only reflect but also embody the theme of the exhibition. A book with the same title, designed by Bülent Erkmen and featuring Erinç Seymen's 2009 work "A Day in the Factory" on its cover, is available to purchase at the gallery. It tells adventures of a young male. It is the colors and tribulations of his world that the installations in "Loyelow" reflect.

"Loyelow fields," the centerpiece of this exhibition, focuses on what T.S. Eliot has famously termed the objective correlative: "the presence of some outward object, predetermined to correspond to the preexisting idea in its living power." In "Loyelow fields," numerous computer parts, a flute from the music lessons at school, shoes, toy cars and numerous childhood objects are presented inside massive amounts of powdered sugar. In one corner of this powdery and sugary world we see the color black, the result of the artist's application of sulfuric acid to the work. The black parts of the burnt powder sugar seem unsettling, carrying a threat to overtake the work sometime in the future.

This introduces the viewer to another feature of Gül's work, which takes center stage in this show. Gül's works are very much alive here; they are in a state of decay. In "Ku," a work that features numerous tea glasses turned upside down and filled with cooked rice, we are invited to observe the rotting of the rice inside the glass. The feeling conveyed here is one of suffocation, a familiar subject for those who visited Gül's ARTER show "5 Person Buffet," where she represents middle class life as a stifling phenomenon, strikingly embodied by a coffin.

"Loyelow follows a lead initiated by the artist in 2011 with her text '5 Person Buffet,' which led to three artistic realizations and a performance, and her second solo show B.I.M.A.B.K.R.," the exhibition text reads. "In this exhibition, as often in Deniz Gül's practice, the audience is invited to immerse in a young boy's stream of consciousness symbolized by an abstraction of a room filled with his dream belongings. While stepping in the exhibition space, and wandering among transitional objects, the viewer will get glimpses of his mind as if accessing his deepest thoughts, senses, hopes and dreams altered by the filter of memory. Somewhere between dream and reality, subconscious and conscious, the viewer is invited to a sensorial experience.

Language and ideas, words and symbols, public and private spaces such are the binary relations the artist is dissecting to take out the dialectic of these mental constructions."

For those who had been following Gül's work for a long time, the exhibition offers a surprise in the form of "Stardust," the first video in the artist's career. The sensuous film features a young man standing against an excavator that destroys a building. The dust rises and moves towards him while the sun shines in the background. The beauty of Gül's video, and her exhibition in general, comes from the way she uses color to construct her narrative: here the dust gathers a golden quality as it flies around the protagonist who stands in between an irreversible past and unforeseeable future, at the present moment of his precarious existence.
RELATED TOPICS