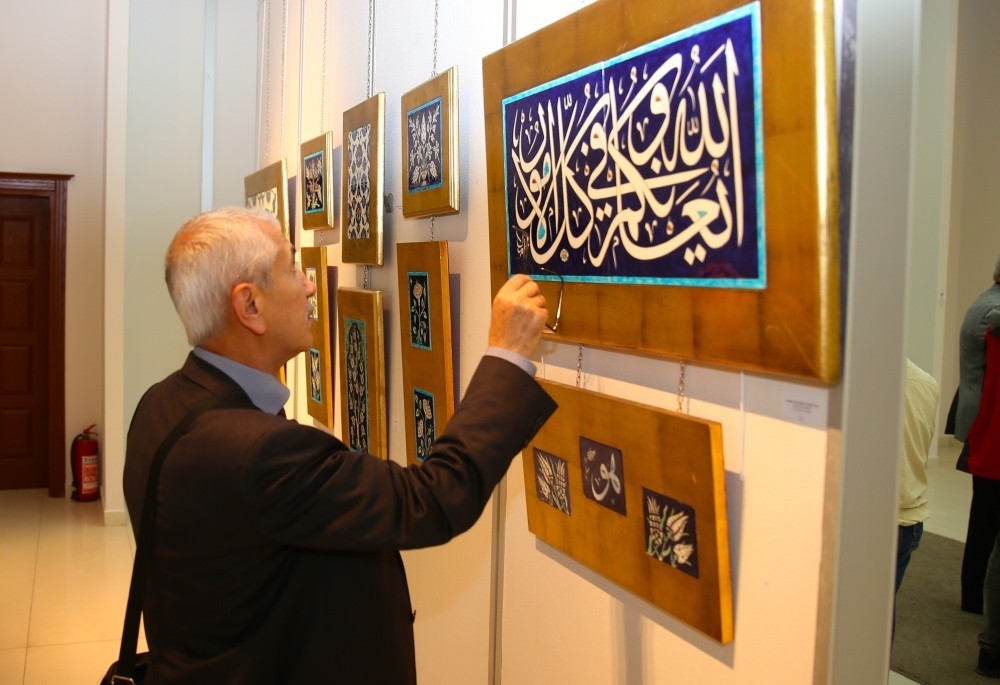 by Anadolu Agency Oct 27, 2016 12:00 am
The "Court Arts" exhibition by Nursen and Güvenç Güven presents a selection of 16th century İznik tiles and pencil drawings on wood. Speaking at the inauguration of the exhibition at the Sakarya Art Gallery, Güvenç Gülen told an Anadolu Agency (AA) correspondent that he and his wife have been interested in traditional arts for the last 35 years. Stating that the exhibition is taking place under the theme of "Court Arts," Güven said: "The exhibition demonstrates İznik tiles which were crafted in the style of the 16th century and pencil drawings on wood. Every piece of artwork is made by my wife and I. In addition to the exhibition, we are celebrating our 35th year in traditional art. We focus primarily on art forms of the 16th century, when İznik tiles were in their heyday in terms of technique and pattern quality."

Güven informed that the exhibition includes 45 works on display as well as pencil drawings on wood which were of particular importance to the late Ottoman architect, Mimar Sinan. Artist Güven said that this art form, which requires elaborate handicraft for the proper formation of gold leaves, has not been in practice for 400 years but he and his wife aim to revive the ancient artform. "During the last years of the Ottoman Empire, Ottoman artworks were restored by foreigners who added baroque-style motifs and covered them with grey oil paint. We managed to uncover authentic artworks in the Selimiye Mosque during the restoration process and completed the missing pieces. We also restored the hand-carved masterpieces which were originally made by Mimar Sinan," Güven said.

He stated that Traditional Turkish Arts reached its peak during the era of Mimar Sinan under the reign of Süleyman the Magnificent, adding that he and his wife practice this artform in accordance with the path paved by architect Sinan himself. The exhibition will continue until Nov. 27.
RELATED TOPICS