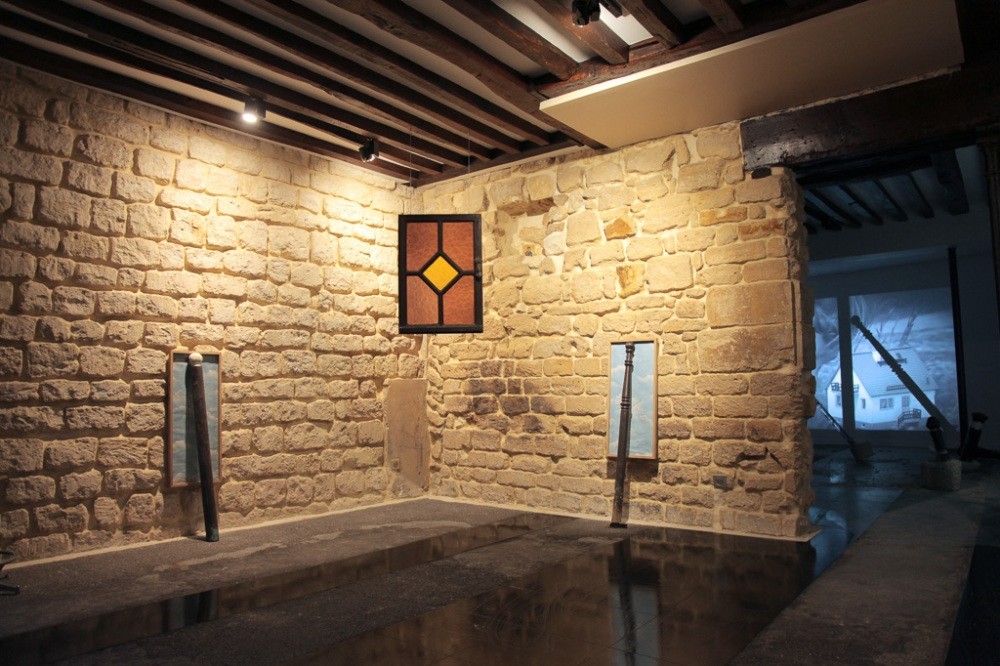 by Zeynep Esra İstanbullu Nov 12, 2016 12:00 am
Artist Lara Ögel's solo exhibition titled "Come Back! Everything Is Forgiven" has opened in Paris. Held by Protocinema, Ögel's exhibition will continue until Dec. 4 and is supported by SAHA Association during the process of production. The artist's site specific installations, sculptures and videos are curated by Mary Rinebold Copeland. "Come Back! Everything Is Forgiven" aims to make the viewer think about matriarchy, doubt, fear and uncertainty and their place in society.

The video installation "Come Back! Everything Is Forgiven" (2016), which is composed of blurry images, brings scenes related to the theme of running away together and associates the motion of running away with mankind's instinct to "fight or flight." For the installation titled "Baba-Anne, Babaanne" (Father-Mother, Grandmother) (2016), Ögel combines the window frame of her late grandmother's house in İzmir with a door she found in France as well as a table. The artist aims to point out the fact that the word"grandmother" (babaanne) is composed of two words in Turkish which are "baba" (father) and "anne" (mother) and the word itself consists of both the male and female sex.

Through her installation, the artist questions how someone can escape something that he or she is a part of and demonstrates the lack of harmony in this fragmented body by bringing furniture that she had memories of together. The installation, which is related to matriarchal stability, aims to show that objects in houses create a sense of intimacy and they are also the foundations of important social structures. With her installation "Father-Mother, Grandmother," Ögel focuses on perceptions such as home, displacement and migration. Her work"Baba" (Father) (2016), on the other hand, is a sculpture composed of bollards on Istanbul's roadsides. The artist points to the patriarchal subtexts of the society by using municipal objects that regulate and restrict pedestrian traffic in the cities along with drawing attention to their names, functions and vertical shapes.

Born in 1987 in İzmir, Lara Ögel studied cinema for her bachelor's degree and completed her master's studies at Clark University. She also attended an intensive infrastructure program at the Slade School of Fine Art in London. Among her solo exhibitions, "One Wall One Pedestal" at Contemporary Istanbul in 2014, "The Happy Average" at Öktem & Aykut, in 2014 and "1+1=3" at Un-Known in 2013 stand out. Ögel, who is a very productive artist, also participates in group exhibitions around the world including "Past, in Each of its Moments, be Citable," DEPO in Istanbul, "Beirut Art Residency Open Studios" in Lebanon, "So Close From Far" at Bilgi University CSM in Istanbul, "The Moving Museum" in Istanbul and her duo exhibition with fellow artist Can Boyan at Kadıköy Külah. Additionally, her works were featured in the publications of Douglas Coupland, Hans Ulrich Obrist, Shumon Basar's "The Age of Earthquakes: A Guide to Extreme Present" (2015) and Hong Kong-based Osage Art Foundation's "South by Southeast" (2016).
RELATED TOPICS