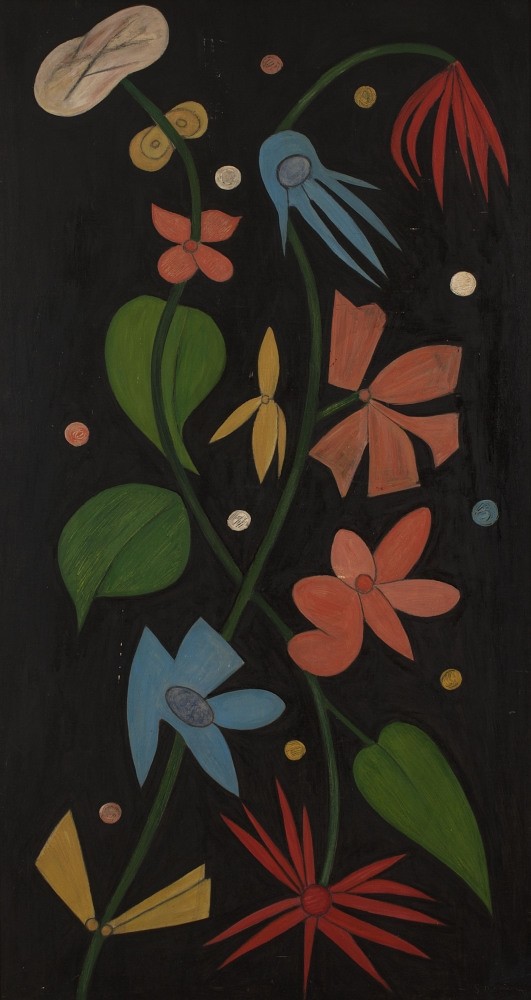 by Zeynep Esra İstanbullu Nov 17, 2016 12:00 am
A unique compilation of artwork created by a prominent Turkish family is now open to the public in a special exhibition that takes visitors on a visual and auditory journey through a family-inspired anthology of art. Previously exhibited in New York City, Milan, Paris, Dhaka, Mexico City and Marseille, the "Flowers" (Çiçekler) collection will be hosted at Collectorspace in the Gümüşsuyu neighborhood of Istanbul's Beyoğlu district until Dec. 24.

Founded by art collector Muhsin Bilge (1944-2014), who began collecting ring stones, copper and niello works in the early 1990s, the Bilge Collection is supported by the late Bilge's wife, Zeynep Bilge. The collection is one of the most uniquely comprehensive family collections in Turkey and includes oil paintings, printing relics, gravure, photography and sculptures. Now a special compilation prepared by the couple's children, Aslı and Ali, is on display at Collectorspace. "Flowers" by Şükriye Dikmen was chosen for the exhibition and is accompanied by a special video about the collection. Also exhibited are an anthology comprised of drawings, personal artists' notebooks and various belongings, including memoirs and letters.

Şükriye Dikmen is the first person whose artwork was included in the art collection that Muhsin and Zeynep Bilge started in the early 1990s. Dikmen created compositions composed of organic forms, starting from traditional still-life forms in her artwork "Flowers." Adopting a simplistic style, the painter brings the past into the present with this striking, minimalist painting.

The Bilge Collection includes work by Turkish and foreign artists in oil painting, printing, gravure, photography and sculpture. Bringing thousands of works together, it creates a mosaic consisting of selected artworks by past generations, and modern artists offering a uniquely personal perspective. Its most prominent characteristic is that it offers an in-depth anthology and has been compiled with aims to research and complete missing periods in artists' lives. The collection includes many artists' drawings from childhood as well as academic works, notebooks, letters, works from different periods and even the work of their painter family members. Among those featured are prominent artists Fahrelnisa Zeid, Aliye Berger, Bedri Rahmi, Eren Eyüboğlu, Kemal Önsoy, Mehmet Güleryüz, Ömer Uluç and Komet, along with Celal Tutant and talented artists from the new generation such as Beyza Boynudelik, Saim Erken, Mustafa Özel, Hande Şekerciler, Füruzan Şimşek, Murat Akagündüz, Mustafa Horasan and İrfan Önürmen. Among the international figures represented are A.R. Penck, whose works are considered some of the most important of the 20th century. Wolf Vostell and Pat Andrea, the founders of neo-expressionism, are also included with the Happenings and Fluxus movements.

The Bilge Collection is one of the most unique and comprehensive collections in Turkey and a secret treasure which has been seen by very few, with the exception of artists and institutions closely associated with the arts. The collection is protected, shaped, shared with the public and enriched with new acquisitions by the second-generation representatives of the family Aslı and Ali Bilge.

Şükriye Dikmen was born in Büyükada in 1918 and died in Istanbul in 2000. She was a member of a well-established bourgeois family from Istanbul and became a student of French artist Leopold Levy at the Fine Arts Academy in Istanbul, where she graduated in 1948. Shortly after World War II, she went to Paris, which was then the center of art, and completed her education in 1953 at the Paris Ecole du Louvre Department of Art History. She worked in the atelier of Fernand Léger in Paris and worked with Gustave Singier and Roger Chastel at Académie Ranson. Her intensive pattern work is the key to the admirable plainness in her paintings. In her own words, the artist "wants to convey much with few lines." Nurullah Berk wrote about her art, saying: "Above all, you can see the inner world of the painter in these paintings which remind us of Chinese and Japanese woodblock prints, the oriental miniature or masters of modern painting. This is a world which is hard to perceive and gets a richer sensitivity as it is examined more and more closely." The artist allows us to see the texture of the material through her use of thin, liquid paints on plywood.

Even though Şükriye Dikmen is primarily known for her portraits, she also did nude, landscape, still life and abstract painting. She opened her first solo exhibition in France in 1953 and in Turkey the following year. On the 20th anniversary of her graduation, she held a retrospective exhibition in honor of the Istanbul State Academy of Fine Arts in 1968. Her works were exhibited throughout her career at institutions that included the Tiglat Art Gallery in 1980, the İş Bank Art Gallery in 1983 and the Yapı Kredi Kazım Taşkent Art Gallery in 1994. Exhibitions she attended included the Edinburgh Festival in 1957, the São Paulo Bienal in 1961 and Contemporary Turkish Art at the Musée d'Art Moderne de la Ville de Paris in 1964.
RELATED TOPICS