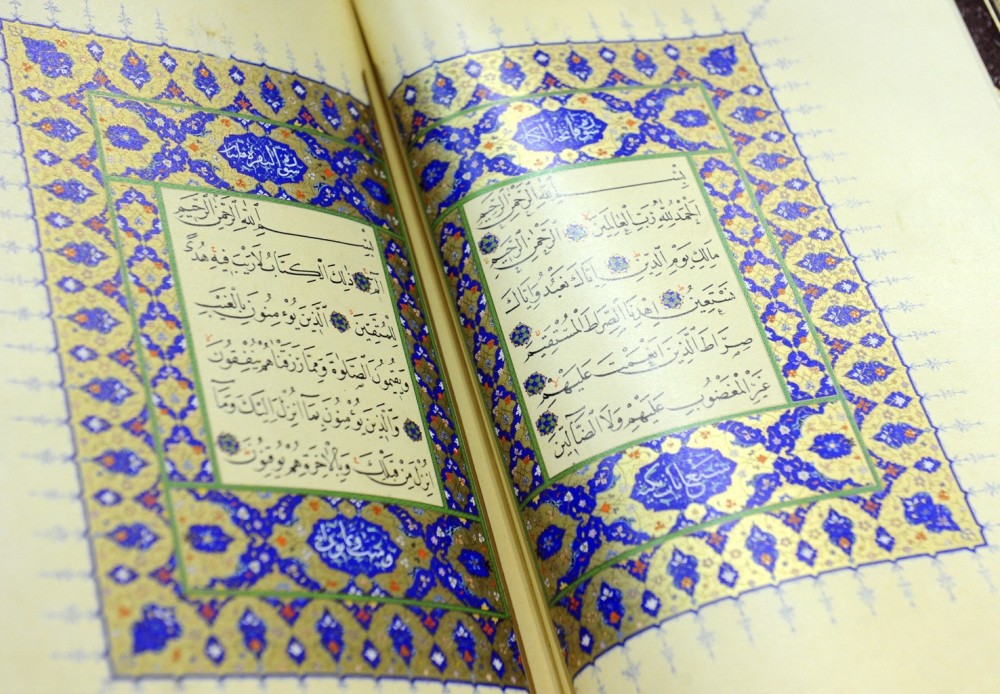 by Anadolu Agency Nov 22, 2016 12:00 am
Known as the "Master of Calligraphers," Sheikh Hamdullah took the art of Islamic calligraphy to its peak. The facsimile process of his masterpiece, and one of Turkey's most valuable handwritten Qurans, "Mushaf-ı Şerif" has recently been completed.

According to Turkey's Culture and Tourism Ministry, the facsimile process of "Mushaf-ı Şerif" was launched and completed successfully within the framework of a project by the Manuscript Association of Turkey.

Preserved at the Topkapı Palace Museum today, the Quran was handwritten by Sheikh Hamdullah, the founder of the Ottoman calligraphy art, specifically for Sultan Bayezid II's "tilavet" (recitation).

"Mushaf-ı Şerif" was written 500 years ago by Sheikh Hamdullah, who also taught the art of calligraphy to Ottoman Sultan Bayezid II, and is among the most valuable manuscripts of the Quran in Turkey with its ornamentation and skin.

It was written with "pointed naksh," a different style that was not much seen in classical calligraphy before, and has now been printed with the highest quality that can be achieved by all methods in today's printing technologies and has been published alongside a book "Şeyh Hamdullah ve Yazdığı Mushaf-ı Şerif" (Sheikh Hamdullah and Mushaf-ı Sharif He Wrote) written by Prof. Dr. Muhittin Serin in a special certified box edition.

"Mushaf-ı Şerif" was photographed at a resolution of 600 DPI and printed with the "hexachrome" technique, which was applied for the first time in Turkey in the printings of the Quranic facsimiles. Thus, different shades of the same color were projected, and color transitions and various stain marks on the pages were successfully transferred.

The "sand filling" method was also used in the edition of the work to accurately reflect the natural texture of the brush paint in the illuminated sections and the feeling of authenticity on the pages.

On the cover of the facsimile, 24 prints were applied on two different authentic leathers with the texture and color closest to the original - hot foil and cold embossing. The mouth parts of the work were individually hand painted by using a mixture of various fabric dyes to give a sense of naturalness, and they were later silk printed. Thus, the patterns on the mouth of the original manuscript were also made available in the facsimile.

The art work, whose developments were closely followed by Cultural and Tourism Minister Nabi Avcı during the printing process, was exhibited at the 35th International Istanbul Book Fair organized by the TÜYAP Fair and Convention Center with the cooperation of the Turkish Publishers' Association and Anadolu Agency (AA) as the global communication partner between Nov. 12 and Nov. 20 at the TÜYAP Fair and Congress Center in Büyükçekmece.
RELATED TOPICS