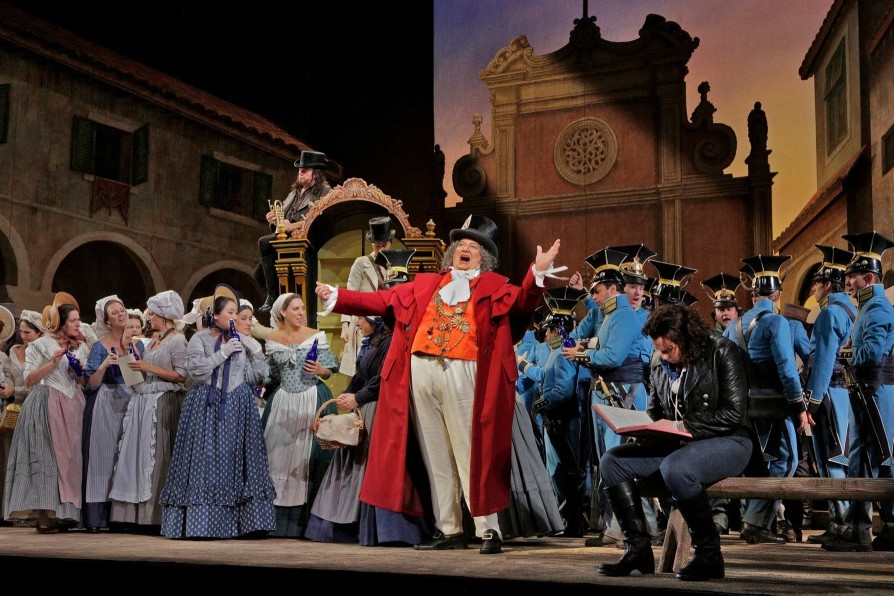 u201cLu2019Elisir du2019Amore,u201d a two-act melodrama by the Italian composer Gaetano Donizetti, is Donizzettiu2019s most staged opera around the world.
by daily sabah Nov 24, 2016 12:00 am
The Metropolitan Opera's latest project "The MET: Live in HD" continues to screen the world's best opera productions at Akmerkez CinemaPink simultaneously with Broadway. As part of the project, Donizetti's opera "L'Elisir d'Amore" (Love Potion) can be watched at CinemaPink with outstanding audio and video quality.

Operas brought to the Turkish audience by the MET Opera's "The MET: Live in HD" project offer a visual feast to the audience at Akmerkez CinemaPink, which uses the Sony Digital Cinema 4K video system along with 36 surround speakers and two surround subwoofers for the first time in Turkey. The audience is able to enjoy the best opera productions in the world with the Dolby Atmos sound system and the new seats at CinemaPink, which were designed by Aziz Sarıyer. Tickets for the screenings can be purchased at the ticket desks at CinemaPink in Akmerkez and from www.biletinial.com.

"L'Elisir d'Amore," a two-act melodrama by the Italian composer Gaetano Donizetti, is Donizzetti's most staged opera around the world. The libretto of "L'Elisir d'Amore" was adopted from the libretto written by Eugene Scribe for Daniel-François-Esprit Auber's "Le Philtre" and written by Felice Romani. The opera premiered May 12, 1832, at Teatro della Canobbiana. The opera, which tells a love story taking place in the Basque region of Spain, includes the famous "Una furtiva lagrima," an aria mostly featured separately in live concerts. "L'Elisir d'Amore" will be screened at Akmerkez CinemaPink on Nov. 26, at 8:55 p.m.

The biggest classical music organization in North America, the MET Opera has been hosting the most talented and creative artists, dancers and orchestras around the world since the day it opened. Every season, the MET Opera stages approximately 27 different opera productions from September through March.

The MET made its first radio broadcast during Christmas of 1931 with Humperdinck's "Hansel and Gretel," and the broadcast continued throughout the day. The MET's successful radio program has continued for 81 years, and it is the longest-running classical music program in the broadcasting history of the U.S. The MET started its first TV program on March 15, 1977, with Puccini's "La Boheme." This program reached over 4 million people around the world. The MET started to broadcast a series of operas with high definition video and sound in December 2006 as part of their project "The MET: Live in HD."
RELATED TOPICS