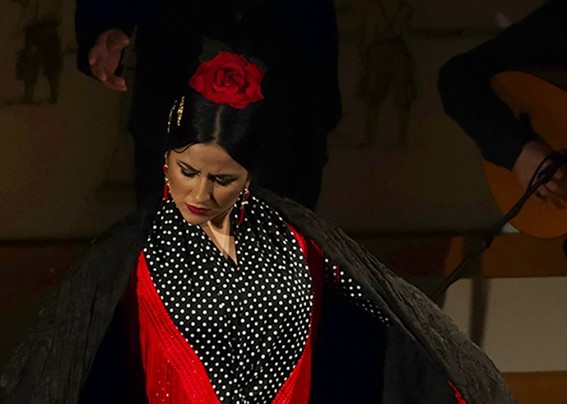 by daily sabah Nov 25, 2016 12:00 am
The 10th International Flamenco Ankara Festival, which ends on Nov. 30, will bring the people of Ankara together to enjoy flamenco dancing and, the expression of emotions through guitar.

The Doruk Okuyucu Ensemble is set to perform at Nesibe Aydın Art Academy tomorrow at 8 p.m. During the concert, Doruk Okuyucu will present a repertoire composed of songs from his latest album, "Giz." Although Okuyucu attended various festivals in Istanbul following the release of his album, this will be his first live performance of the songs from the album. Music lovers in Ankara will have a chance to enjoy Okuyucu's guitar compositions that he composed with the idea that the "local is universal," and a series of songs fueled by "fusion flamenco" enriched with modern tunes. During the concert, the accomplished musician will be accompanied by Deniz Beydilli on guitar, Kerem Kırca on percussion and Ata Erdoğrul on vocals. Professional dancer Dilek Arslan from Ankara will light up the stage with her dance moves.

On Nov. 28, Ceyhun Güneş will meet flamenco lovers at METU Cultural and Congress Center for his 20th Year Concert. The concert, during which the musician will celebrate his two decades as an artist, is in the form of recital and conversation, and Güneş will talk about his 20-year journey and share funny and emotional memories with the audience. There will be Mehmed Mert Baycan on percussion, Mehmet Efe on violin and Gökhan Bilek on contra bass accompanying Güneş on the stage. Apart from his most popular songs, Güneş will also perform new compositions for his audience in Ankara.

On the last day of the festival, Diego del Morao will take the stage at METU Cultural and Congress Center at 8 p.m. Regarded as one of the best guitarists of the new generation, Morao has released four studio albums so far. The musician began his musical education with his father Moraito Chico, who is also a famous musician. The concert on Nov. 30 will mark the first concert from Morao, who has been collaborating with the best flamenco musicians in the world since his early years, in Turkey. The musician will be accompanied by a band of percussions and violin and dancer Gema Moneo. Throughout the festival, Morao and his band will offer guitar, dance and composition workshops to music lovers as well.

For further information on the 10th International Flamenco Ankara Festival, you can pay a visit to the Flamenco Association in Ankara or visit www.flamenkofestivali.com and the official social media accounts of the festival. Tickets for the concerts can be purchased on biletix.com.
RELATED TOPICS