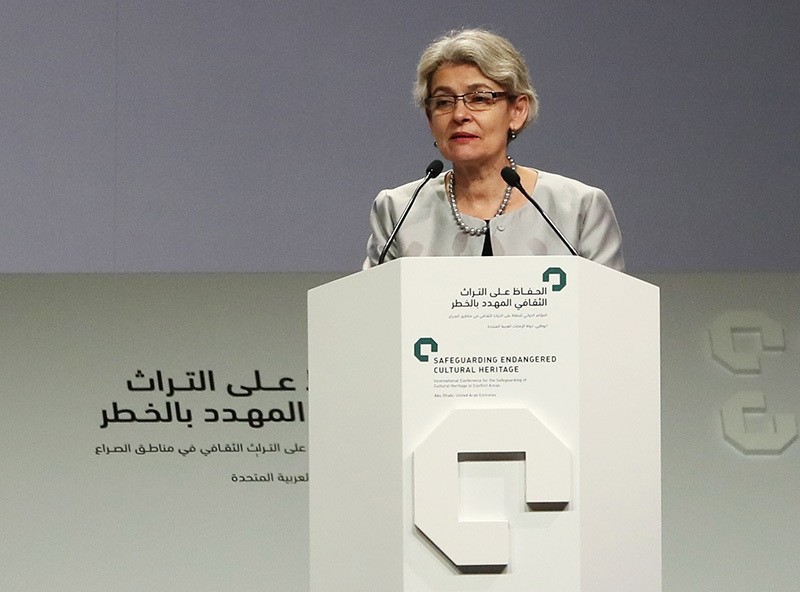 UNESCO director Irina Bokova delivers a speech during the closing ceremony of an international conference on protecting the world's cultural heritage on December 3 (AFP Photo)
by Dec 03, 2016 12:00 am

Representatives of around 40 countries on Saturday approved plans to establish a fund to protect heritage sites in war zones and a network of safe havens for endangered artworks.

A closing statement issued after two days of talks in Abu Dhabi did not specify the total amount pledged for the fund but French President Francois Hollande said a target of $100 million remained achievable.

The meeting, co-sponsored by France and the United Arab Emirates, was spurred by the systematic destruction and looting of archaeological treasures in Iraq and Syria by the Daesh terrorist group.

The world watched in dismay as the terrorists systematically destroyed temples and tower tombs in the ancient Syrian city of Palmyra last year.

In Iraq, videos showed Daesh using bulldozers and explosives to destroy Nimrud, a jewel of the Assyrian empire, and ransacking pre-Islamic treasures in the Mosul Museum.

But proposals for ancient artefacts to be taken abroad for safekeeping met with reservations from some countries -- notably Greece and Egypt -- which saw treasured artworks removed for display in museums in Europe and North America in the 19th and early 20th centuries.

Participants in the meeting, who also included representatives of international organisations and private institutions, pledged "to safeguard the endangered cultural heritage of all peoples, against its destruction and illicit trafficking."

The Geneva-based fund they set up will be charged with safeguarding cultural heritage endangered by conflict, financing preventive and emergency operations, combating the illicit trafficking of artefacts and helping restore damaged cultural property.

UNESCO director Irina Bokova said: "The creation of this fund breaks new ground.... I see this as the starting point of something... global."

Abu Dhabi Crown Prince Sheikh Mohammed bin Zayed Al-Nahyan urged all countries to "cooperate and coordinate to control the trafficking of cultural property.... especially in some Arab countries that have suffered from the dangers of violence and terrorism."

France is to contribute around $30 million (28 million euros) to the fund.

"Our objective is to collect at least $100 million, and we can reach this," Hollande said.

Participants hope the international network of safe havens will be used to temporarily store cultural property endangered by conflicts or terrorism.

But with sovereignty a sensitive issue, ancient artefacts would only be moved out of a country at the request of its government, a participant in the meeting told AFP.

Works of art would first be moved to a safe place within the country concerned. Safeguarding them in a neighbouring country would be the next option while moving them elsewhere would be a last resort.

Greek Prime Minister Alexis Tsipras told participants it should be the "last option" and there should be "guarantees for the safe return" of cultural property removed for safe keeping.

Greece has long sought the return from Britain of ancient sculptures that once decorated the Parthenon temple on the Acropolis in Athens but were taken by British diplomat Lord Elgin two centuries ago.

Participants at the UNESCO-backed conference called on the UN Security Council to support the initiative.

The United Nations Educational, Scientific and Cultural Organization will oversee the safeguarding operations.

The meeting coincided with an announcement by Swiss authorities that they had seized cultural relics looted from Syria, Libya and Yemen that were being stored in Geneva's free ports.

Swiss representatives told the meeting of the country's experiences in providing safe haven for art works during the conflicts of the 20th century.

A follow up conference will be held in 2017 to assess the implementation of plans and the first projects to be financed by the international fund.