July 15 coup attempt from the perspective of Syrian refugees 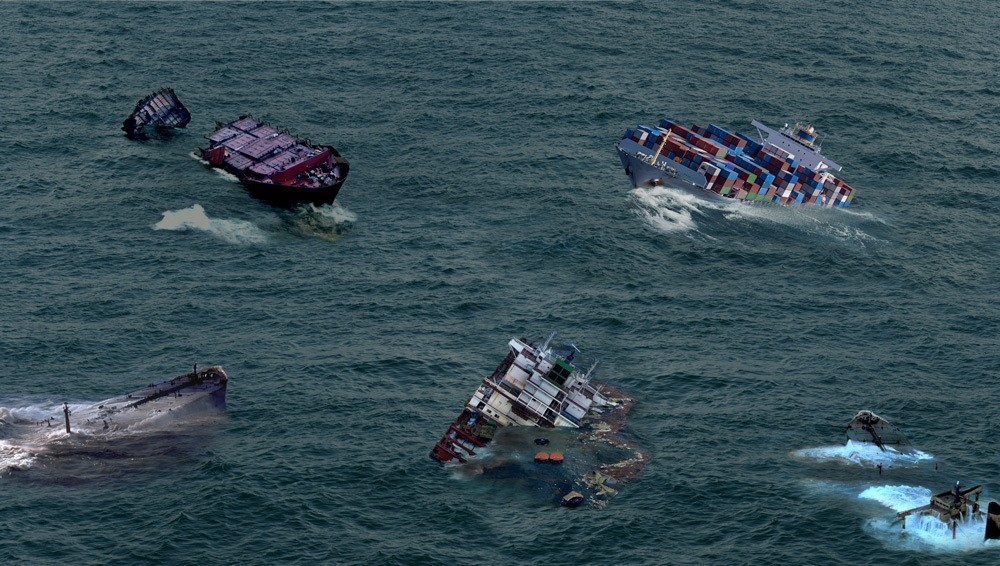 In his SALT Galata show ‘Who Throws Whom Overboard?' Oliver Ressler explores the lives of Syrian refugees, the nation state and the notion of citizenship through large format photographs, wall texts, films and installations

Oliver Ressler's meticulously researched and ultra-realistic video projects, currently on display at SALT Galata, reminded me of Belgian surrealist painter Rene Magritte. Ressler approaches some of the stark realities of our world in a strongly documentary manner before allowing a bit of surrealist sensibility into his work.

Many of the works displayed in his "Who Throws Whom Overboard?" exhibition, which continues until Jan. 15, exemplify this curious mixture. In his large-format photographic series "Stranded," Ressler presents images of dead men wearing business suits. He places the slogan "Property is Theft" by the French anarchist Pierre-Joseph Proudhon at the marble entrance-wall of SALT Galata, a building that once served as a bank.

Ressler, who lives in Vienna, focuses on issues like global warming, economics and democracy in his work. While working in Istanbul for this show, he has focused on borders, migrations, and the limitations of the nation state as a political entity. 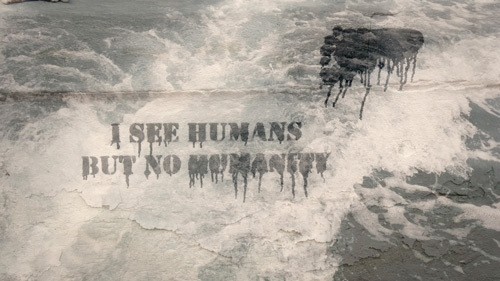 "I am no historian, just a person observing the current situation neoliberal capitalism has established," Ressler told me. "But I assume as it could be said for the 19th century, it is as true today that for the vast majority of people globally, this economic system is not working. So any feeling of anger is completely justified. And I think any serious political movement interested in transformative politics must find ways to channel this anger into progressive political projects."

The centerpiece of Ressler's exhibition is a video entitled "There are no Syrian refugees in Turkey," again a surrealistic idea that defies our knowledge about the refugee crisis. The video features interviews with Syrian refugees who describe their living conditions here, and the extraordinary events that unfolded on July 15, the day of the attempted coup. One interviewee remembers how she instantly stopped talking in Arabic and feared that once triumphant, the military junta would get rid of the "weakest link" first: refugees like her. Under the rule of Mohammad Morsi in Egypt, refugees were treated well, another interviewee remembers, but that changed after that leader was toppled by the military.

"A Syrian journalist based in Istanbul, Zuhour Mahmoud, helped me to establish connections to most of the Syrians who appear in the film," Ressler told me. "I soon realized I needed to provide a basis in the film where the Syrians can speak without fear of any unwanted consequences, so I decided to record voices only and not their faces and not provide information about the identities of the interviewees. From the beginning, I was interested more in an analysis of the current political situation in Turkey and the European Union from the perspective of the Syrians."

As he decided not to include the images of the speaking persons in the film, Ressler recorded visual material in the city inspired from what the Syrians were saying. "So the images are in a constant dialog with the spoken word. By coincidence I started working on 'There are no Syrian refugees in Turkey' just a few days following the coup attempt. Therefore, the coup attempt also became a central topic for the film, as more or less all the conversations sooner or later addressed this topic. As the Syrians describe in the film, as the weakest group in Turkish society, any political change presents a huge danger for their safety and wellbeing."

That huge danger also threatens the lives of locals unsettled by the tribulations in the world economy, as the men lying motionless on an empty beach in Ressler's "Stranded" shows. "Unlike refugees, these men in 'Stranded' wear business suits, the standardized clothing of politicians and managers," Ressler told me. "Their bodies are partly in the water, partly on the beach; they appear to be stranded. These images could be seen as depicting those responsible for the policy of drowning refugees. The current European Union measures go beyond 'refugee deterrence.' Today the EU makes use of the catastrophe it caused itself (through support for dictatorships, political intervention in uprisings, continuous wars on terror and economic strangulation of Africa and the Near East) to prepare renewed military intervention behind the back of the population. Meanwhile, corporate executives have for decades used their global economic reach to enrich their shareholders at the expense of environmental, social and labor standards, causing entire regions to sink into poverty."

The photographic images in the "Stranded" series therefore point to a prospective collapse of the capitalist system. "The economic breakdown is already underway," the artist said. "As it spreads and deepens, disasters, wars and uprisings of all kinds will follow. "Stranded" imagines what might happen if the managers of today's economy - those for whom there is no alternative to corporate profit and human loss - were themselves sacked and thrown overboard by the people."
RELATED TOPICS