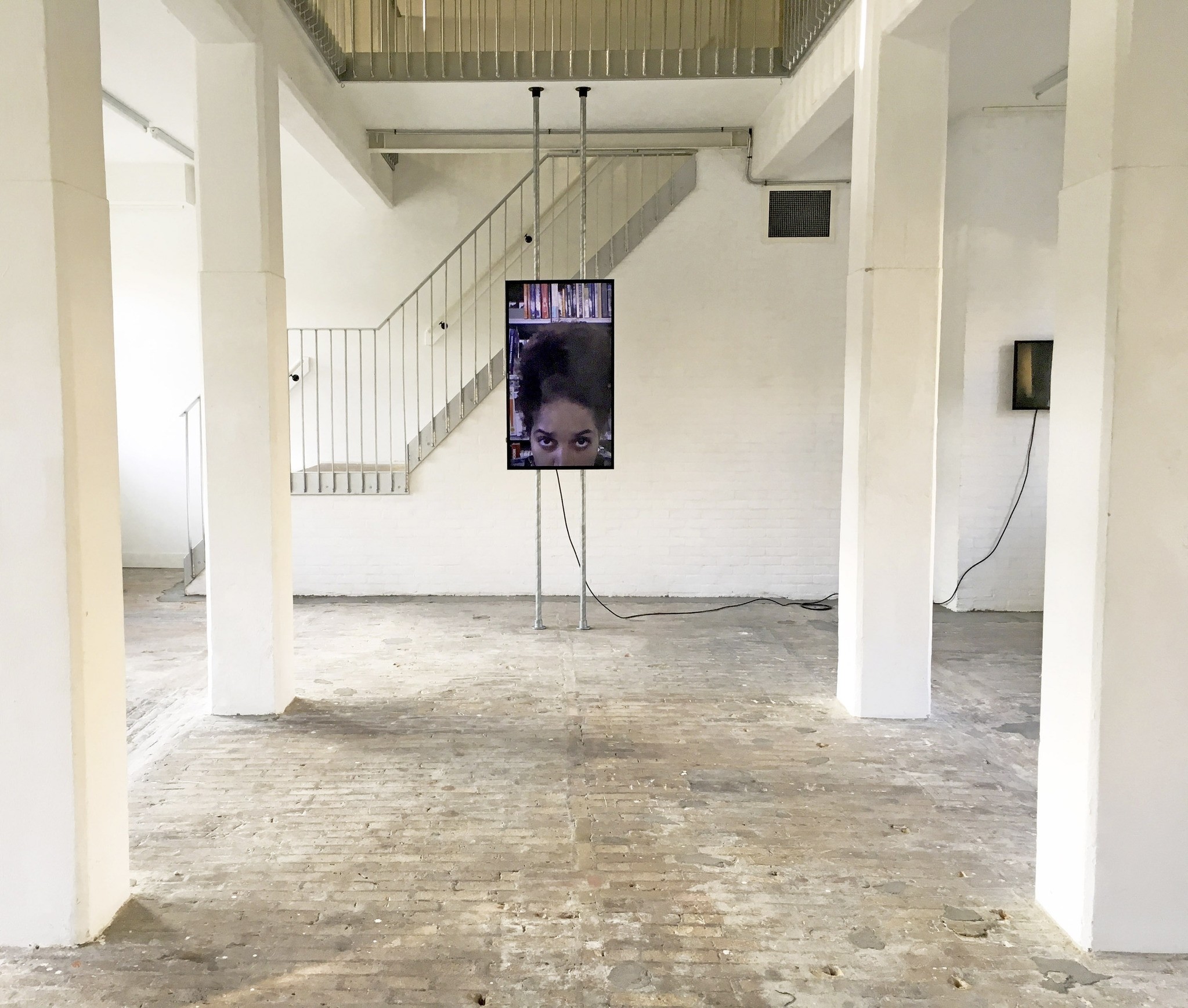 Moroccan artist Hamza Halloubi has opened an exhibition at a Dutch gallery, consisting of six video installations that will catch your eye thanks to the meticulous design and striking visuals

A Tale of a Tub, a Rotterdam based art gallery is hosting Moroccan artist Hamza Halloubi's exhibition "Travelling" until Jan. 29. Halloubi's practice consists of video, photography and publication. Hamza Halloubi studied at HISK in Ghent Belgium and recently completed his artist residency at the Rijksacademie in Amsterdam. He has participated in exhibitions in various international art institutions.

The current show consists of six video installations spread over the gallery's specific structure. There is no place to escape from the well-curated installations; they directly catch you with their special way of showing. "Travelling" (2016) is the first project that you encounter when you enter the space, which is placed in the center. The way of exhibiting is quite unusual; two metal sticks from the ground to the ceiling and a screen is placed on these metal sticks, this way the video gains kind of a sculptural effect.

As a visitor you see 360-degree movement of the camera. The camera finishes its vertical movement in one minute 18 seconds. It starts with an archival photograph and it continues with a female face that is directly looking inside the lens. The feeling of being watched is strong.

The second video is "28 seconds" (2012). My first impression was that it was a still image. The image is very stable; the man barely moves for 25 seconds, however, it is clear that he is looking at something outside the frame. This triggers uncontrollable curiosity as an observer. What is he looking at? Suddenly, the guy in the video lifts his head, looks straight into the camera. Then the camera lifts down immediately with fast movement and we see a photograph of a Puerto Rican woman, taken by well-known photographer Diane Arbus. The irresistible pleasure of watching and gazing, transforms into a feeling of embarrassment as the character looks at the observer. Again the observers, the visitors, the spectators become the observed by the character in the movie.

Making art on political subjects is always tricky for artists, mostly because of ethical problems. Especially, for the artist, who is dealing with images of these problems. Halloubi's work "With Michael in Jerusalem" (2015) is in his very own way trying to deal with the Palestine, Israel issue. In the short film, we see a certain view of a city from a hill. Black smoke is billowing from the left of the frame. Without a clue that comes from the title, we can't say that this is Palestine. Although, it is obvious that this black smoke is a good metaphor to talk about this problem, the video still preserves its vague atmosphere. It feels like the smoke is coming from a fire that is not possible to extinguish. The audience is the spectator again in this case, but there is another spectator in the scene, we see a guy from the back that is just standing and watching the view. Suddenly he realizes the camera (Halloubi), and with quick steps he comes to the camera.

After this scene, we see that Halloubi is walking away from the camera and disappearing, the previous spectator is becoming the observed, "the other."

These three works of Hamza Halloubi reminded me of Turkish art historian Zeynep Sayın's mind-blowing book "Pornography of the Image," where she talks about what an image is and what it does. What I found quite interesting and similar to Halloubi's art practice in her book is where she talks about aesthetics of orthodoxy's icons.

According to Sayin, "There is no proper perspective in orthodoxy's icons, not because they didn't know what perspective is. It was an intentional choice not to use perspective. They were intended to make the icons as the one (Sacred monks, apostles and God) who observes the one (believer) in front of it."

For Halloubi, it is the field in which he investigates who the observers are, who and what is observed; the East, women, immigrants, politics? The line between these two notions are vague, it is on quite slippery ground in Halloubi's practice. They are shifting all the time in order to question these terms. The difference between the subject and the object is also unstable; it can change in a second in his art practice. Hamza Halloubi's videos represent the images that withdraw themselves when they come to somebody's attention.

The gallery that is displaying this exhibit is a former bathhouse. A Tale of a Tube was founded in 2014 by Nathanja van Dijk and Suzanne Wallinga and is run in partnership with Carolyn H. Drake. The gallery has a diverse range of exhibitions on different subjects and from various art practices. They are trying to respond to a moment in which the support of artistic initiatives is threatening to decrease after the 2008 economic crisis. They believe this space is needed for both the development of contemporary art in Rotterdam, and the appreciation of its position in our own time.
Last Update: Dec 20, 2016 1:57 am
RELATED TOPICS