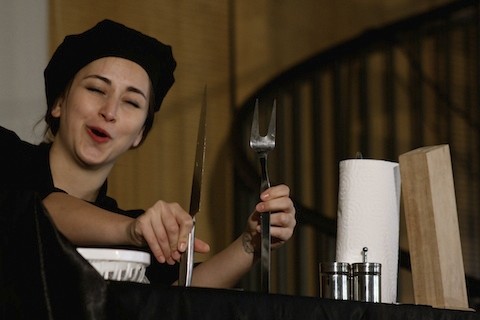 by Zeynep Esra İstanbullu Dec 22, 2016 12:00 am
Antalya Metropolitan Municipality's Antalya City Theater (AŞT) continues its much-anticipated project "Guest Theaters." As part of the project, theater companies from other provinces of Turkey as well as around the world stage their plays free of charge. This month, AŞT hosts Istanbul-based theater company Kadro Pa. Kadro Pa will stage their play "Macbeth in the Kitchen" today and tomorrow on the AŞT stage. Free invitations to the play can be obtained from the main counters of AŞT.

"Macbeth in the Kitchen" is adapted from William Shakespeare's play "Macbeth" and an example of "object theater." "Macbeth", the shortest and most-performed play by Shakespeare is about a coward and murderer who claims the Scottish throne after killing King Duncan. However, in "Macbeth in the Kitchen," the setting is transformed into a kitchen and the characters into kitchenware and food. For instance, green peppers represent loyal soldiers while onions represent the public.