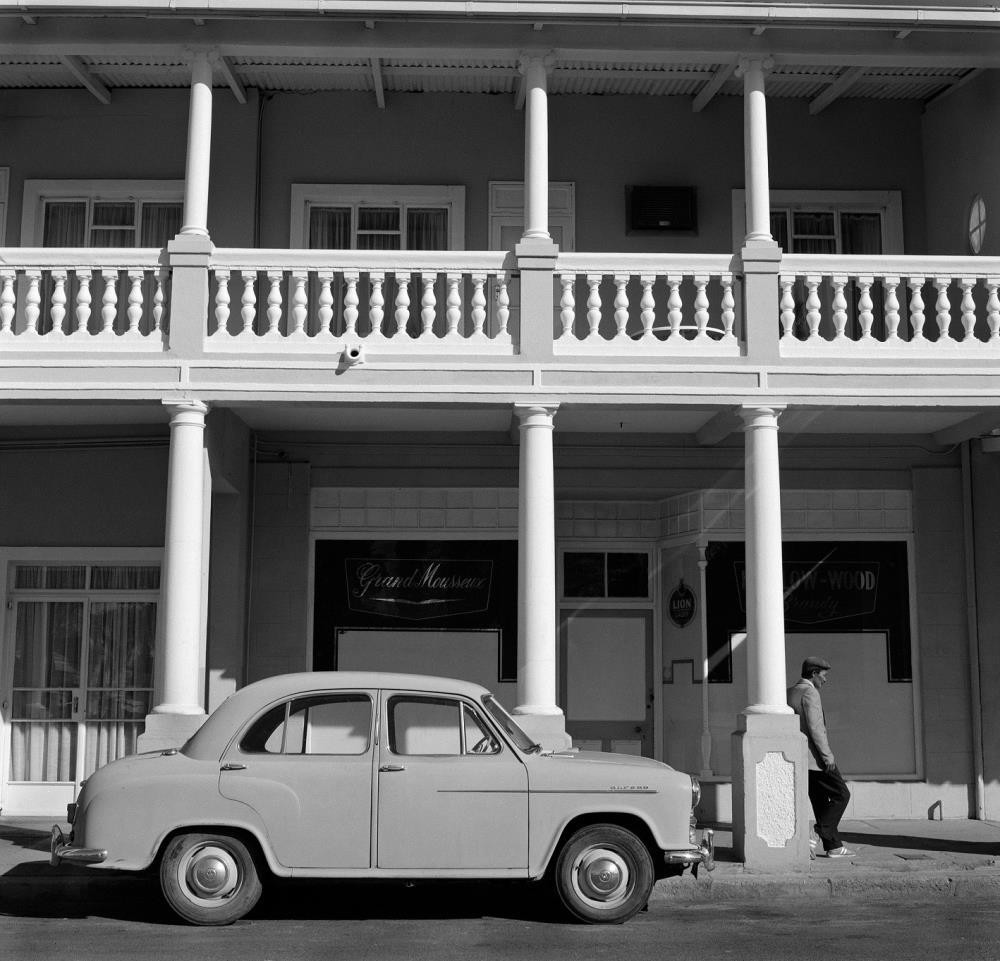 Istanbul Modern Photography Gallery is hosting the works of South African artist Roger Ballen, who employs drawing, painting, collage and sculptural techniques to create a new hybrid aesthetic while remaining firmly rooted in photography, with an exhibition that aims to follow the trajectory of the artist's output since the 1980s

The works of American-born South African artist Roger Ballen, one of the most important contemporary photographers of the 21st century, will be on display in Turkey for the first time at Istanbul Modern Photography Gallery until June 4, 2017.

Organized with the support of the Eiger Foundation, the "Roger Ballen: Retrospective" reveals the evolution of Ballen's work from a form of documentary photography into a unique style he describes as "ballenesque." Ballen turns the counterparts of reality and fiction in the art of photography upside down and creates a whole new hybrid aesthetic using drawing, painting, collage and sculpture that are also firmly rooted in photography.

Curated by Demet Yıldız, the exhibition presents a selection of works from seven Ballen series, "Dorps," "Platteland," "Outland," "Shadow Chamber,""Boarding House," "Asylum of the Birds" and "Theatre of Apparitions" as well as a new installation titled "Room of the Ballenesque." 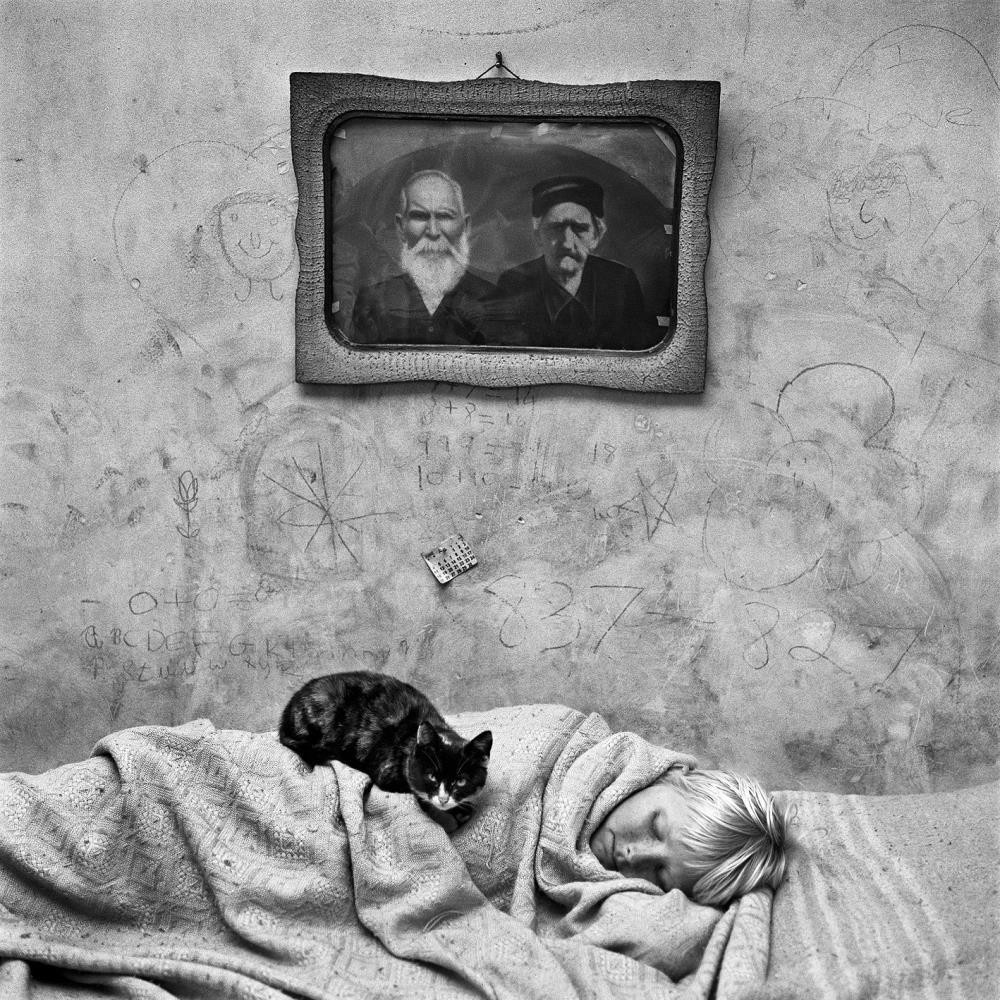 Ballen first came to prominence as a photographer with the publication of"Dorps: Small Towns of South Africa," in 1986. His view of the Afrikaner underclass would be recognized for its dispassionate observation, without comment or obvious involvement, possibly akin to Ballen's portrayal of the surrounding architecture. As a practicing geologist on field trips, Ballen had encountered his subjects living under the imagined benefits of the policies of the regime. The landscape photographs in the "Dorps" series would mark the end of Ballen's foray into outdoor photography. However, the series would mark the beginning of Ballen's use of the middle format camera and flash, as well as the deliberate choice of a square negative and black-and-white film. 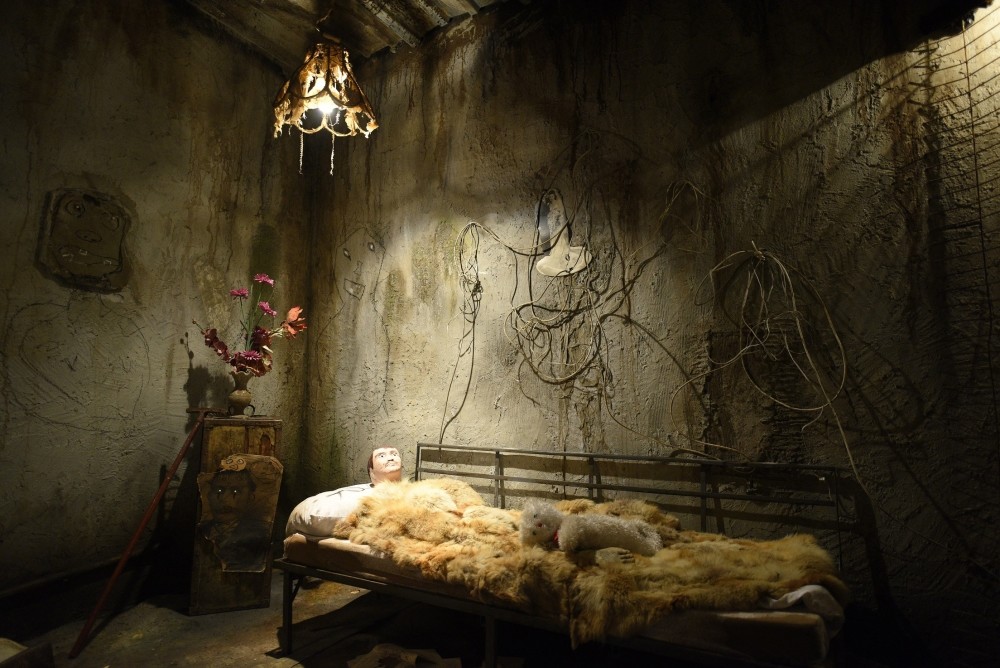 For Ballen's second series, "Platteland: Images of Rural South Africa," the photographer dedicated himself to the deep exploration of the inhabitants of the marginalized and poor white communities of the rural heartlands. The resulting psychological portraits were perceived by the public as deeply disturbing images of a world where the dominant but uneducated whites who had privileged access to jobs and accommodation under apartheid had descended into a world of chaos, paranoia and disappointment.

The publication of "Outland" in 2001 saw Ballen moving away from the documentary approach to create something entirely new in which the veracity of his direct approach and the use of black and white photography - long-associated with the real and the factual -- was transformed by bothBallen's mind and the camera lens. Ballen performs acts with the absurd, arranging objects and interacts with animals in front of the camera. The elements of textured walls, trailing bare wires and odd arrangements of ornaments and decorations Ballen had discovered inside these dwellings during the course of creating "Platteland" become increasingly formal.

The lessons Ballen had learned with the ground-breaking "Outland" were pushed forward into new realms with "Shadow Chamber." Yet, they entered a world of fiction and storytelling far removed from his early works. A great admirer of the plays of Samuel Beckett, Ballen created images within enclosed spaces, with minimal props. Visual psychodramas replaced dialogue and characters could be described as actors without audiences, acting out an existential theater.

For five years, Ballen focused his attention on a strange and alluring place near Johannesburg that was given the title, "Boarding House." Crowded with poor workers, transients, criminals hiding from the law, witch doctors, children, pet animals and insects, the images skirted the fine line between dream and the waking state. The altered sense of place contained drawn and sculptural elements, and the collaboration between artist and subject had become clearly evident. The images in "Boarding House" blurred the lines between documentary photography and art forms such as painting, theater and sculpture.

Another series titled, "Asylum of the Birds" was presented as a monograph of iconic photographs all taken entirely within the confines of a house in a Johannesburg suburb, the location of which has remained a tightly guarded secret. The cast was made up of inhabitants of the house, both people and animals, and most notably the ever-present birds, all performing within a sculptural and decorated theatrical interior created and orchestrated by Ballen.

Inspired by the sight of hand-drawn carvings on blacked-out windows in an abandoned women's prison, Ballen started to experiment using different spray paints on glass and then drawing on or removing the paint with a sharp object to let natural light through. The results were like prehistoric cave-paintings: the black, dimensionless spaces on the glass are canvases onto which Ballen has carved his thoughts and emotions. The "Theatre of Apparitions" series transformed Ballen's photographic work into a new set of fiction which represented a newly constructed psychological drama of infinite possibility. 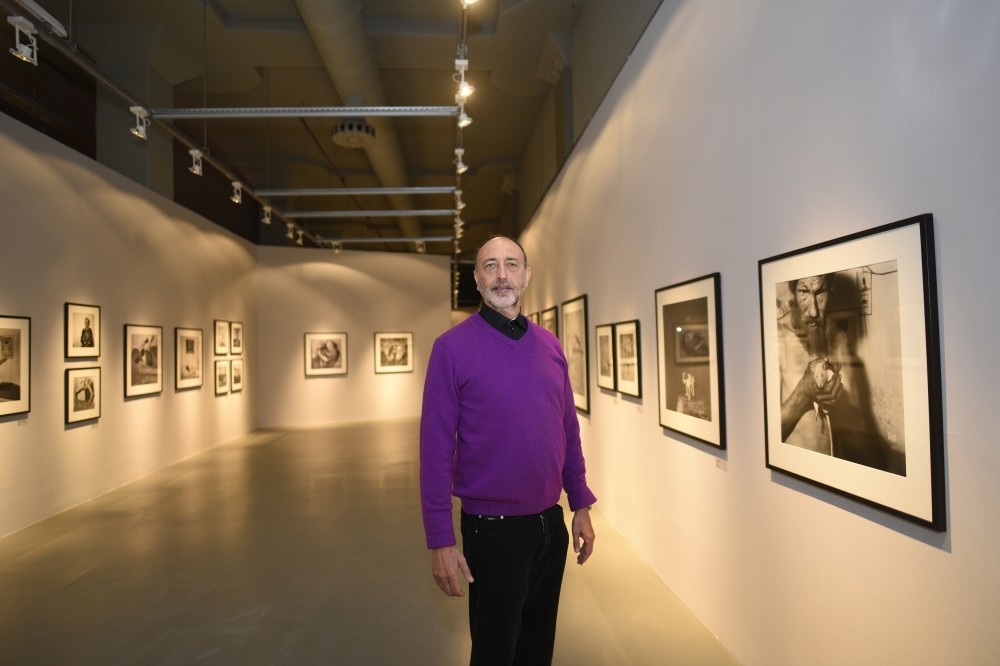 Ballen is one of the most important photographers of his generation. He was born in New York in 1950 but for over 30 years he has lived and worked in South Africa. His work as a geologist took him out into the countryside and led him to take up his camera and explore the hidden world of small South African towns. At first, he explored the empty streets in the glare of the midday sun but once he had made the step of knocking on people's doors, he discovered a world inside these houses which was to have a profound effect on his work. These interiors with their distinctive collections of objects and the occupants within these closed worlds took his unique vision on a path from social critique to the creation of metaphors for the inner mind. After 1994, he no longer looked to the countryside for his subject matter, instead finding it closer to home in Johannesburg.

Over the past 30 years his distinctive style of photography has evolved using a simple square format in stark and beautiful black and white. In the earlier works of the exhibition, his connection with the tradition of documentary photography is clear but throughout the 1990s he developed a style he describes as "documentary fiction." After 2000, the people he first discovered and documented living on the margins of South African society increasingly became a cast of actors working with Ballen in the series "Outland" and "Shadow Chamber," collaborating to create disturbing psychodramas.

The line between fantasy and reality in his series, "Boarding House" and "Asylum of the Birds" has become increasingly blurred and in these series he has employed drawings, painting, collage and sculptural techniques to create elaborate sets. People are now often absent altogether; replaced instead by photographs of people used as props, by doll or dummy parts orwhere they do appear it is as disembodied hands, feet and mouths poking disturbingly through walls and pieces of fabric. The often improvised scenarios are completed by the unpredictable behavior of the animals which are captured in an instant. Ballen has invented a new hybrid aesthetic in these works but one still rooted firmly in photography.