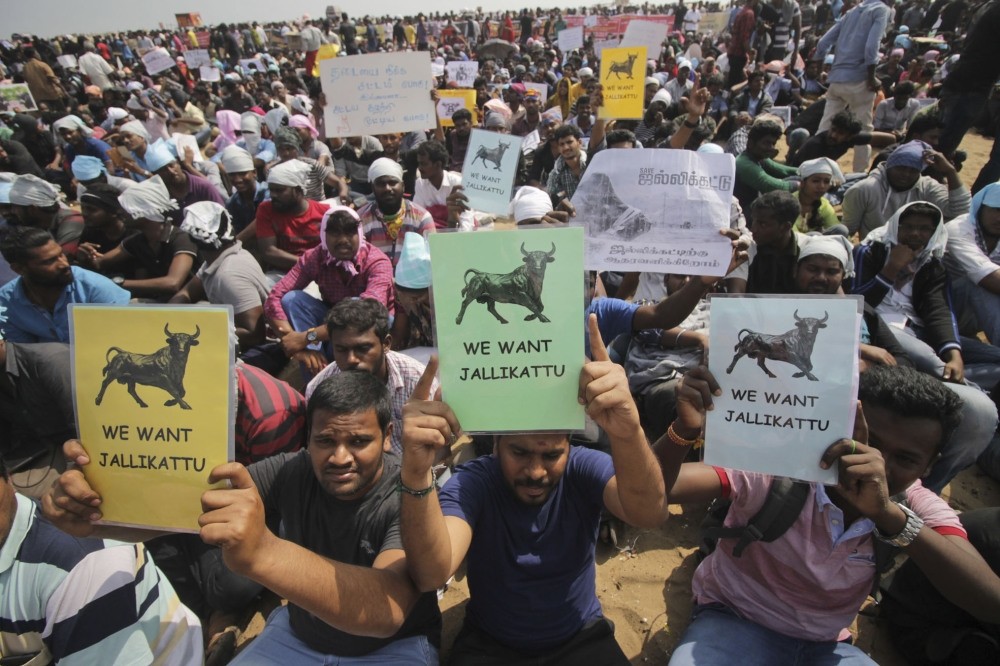 Rahman, who won an Oscar for the Danny Boyle-directed "Slumdog Millionaire," joined top Tamil cinema stars, directors and other celebrities to support a protest led by students against the ban on the sport known as jallikattu.

Thousands of students along with professionals ranging from government to industries have gathered on Marina Beach in Tamil Nadu's capital Chennai demanding the ban be rescinded.

They have been camping on the beach since Tuesday with their numbers growing daily.

"We will head home only after seeing the bulls cross the vaadivasal (the gate through which the animals enter the jallikattu field)," S. Balakrishnan, a protester, was quoted as saying by the Hindustan Times newspaper.

"Tell them you are Tamilian, stand with your head held high," hundreds around him chanted in Tamil.

Jallikattu forms part of the festivities during the Tamil New Year harvest festival season of Pongal, which was celebrated last week.

Bulls groomed for the event are let loose in open fields and young men compete to hang on to their humps, wrestle and subdue them with their bare hands and get ahold of flags tied to their horns.

Animal rights activists have long opposed the activity, pointing to injuries it causes to bulls as well as human deaths. They claim the animals are often given alcohol and chili powder is thrown at them to make them react.

The Supreme Court banned the centuries-old sport in 2014 on a petition by animal rights activists including PETA.

Supporters of the sport say it is a part of local tradition. "I'm fasting tomorrow to support the spirit of Tamilnadu!" Rahman posted on Twitter Thursday.

As protests escalated, Tamil Nadu Chief Minister O Panneerselvam flew to New Delhi where he said he was consulting the federal government and legal advisors.

"We will pass an ordinance ... a solution will be found soon," Panneerselvam said requesting the protesters to disperse.

The Supreme Court, which has repeatedly turned down the government's pleas to allow the sport, on Friday, deferred its verdict on the latest petition for a week.

"We are having discussions, some way will be found in a day or two," attorney general Mukul Rohatgi told reporters in New Delhi.

Singing, playing drums and chanting slogans, at least 10,000 protesters stayed put on Chennai's Marina Beach. Several of them told television channels they would not budge till the moment jallikattu was allowed.

Smaller protests were reported from several towns and villages across Tamil Nadu.

Most shops, hotels and restaurants in Chennai downed shutters in support of the agitation. Several trade unions also announced a day's strike.