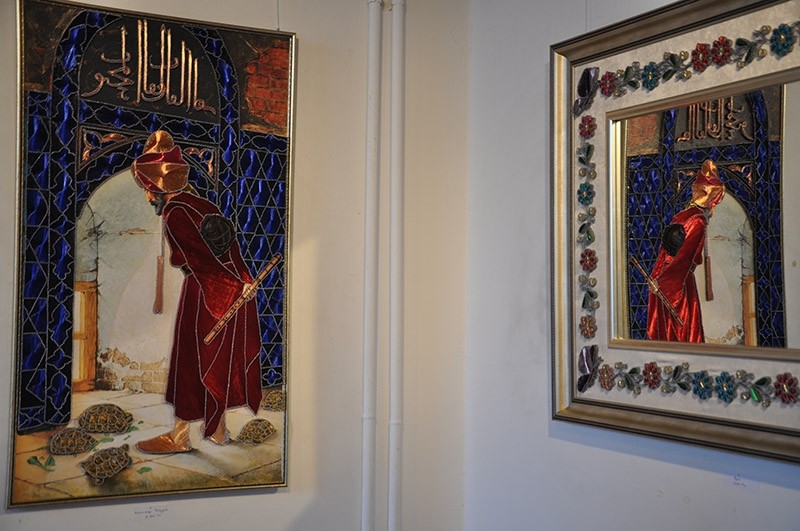 Gülşen Özkan has completed a wire art version of the famous Ottoman painting "The Tortoise Trainer" using 700 meters of wire and over 8,000 nails in the Black Sea city of Trabzon.

Özkan, a literature teacher, became interested in the wire art after her mother began taking a course at the Ortahisar Municipality Public Education Center in Trabzon. Özkan herself decided to sign up for the course four months ago and has since fallen in love with the art.

Wire art, or "filography," originated in the Middle East and spread to Europe and the rest of the world. Filography involves weaving pieces of wire or string around nails that have been secured to a piece of wood or fiberboard to create lines and shapes.

Özkan began making simple figures by wrapping different colored wires around the strategically placed nails, but once she got the knack for it, she decided to recreate the celebrated painting using her new skills.

She completed the project in one month, and the finished product garnered a lot of interest during an exhibition held in the Hall of the Provincial Directorate of Culture and Tourism in Trabzon.

"I worked day and night to finish the artwork when I heard that there would be an exhibition," Özkan explained. "My hands were bleeding, my nails were broken, and especially my thumbs were blistered," she added

But all of her hard work paid off when she was able to see her painting on display at the exhibition, "Despite all of the difficulties, I was very patient with the work. Thank goodness I did it. I managed to finish it for the exhibition."

Her next goals are to recreate "The Girl with the Pearl Earring," and the "Mona Lisa," using the art of filography.

Except for small workshops, there is no formal production facility or education institution for the meticulous but beautiful art form. It relies on individuals to pass down the knowledge of the trade to the next generations.

The original "Tortoise Trainer" painting was crafted in 1906 and 1907 by Osman Hamdi Bey and was sold for $3.5 million in 2004. It is currently on display at the Pera Museum in Istanbul.