French artist to live inside 12-ton rock for a week 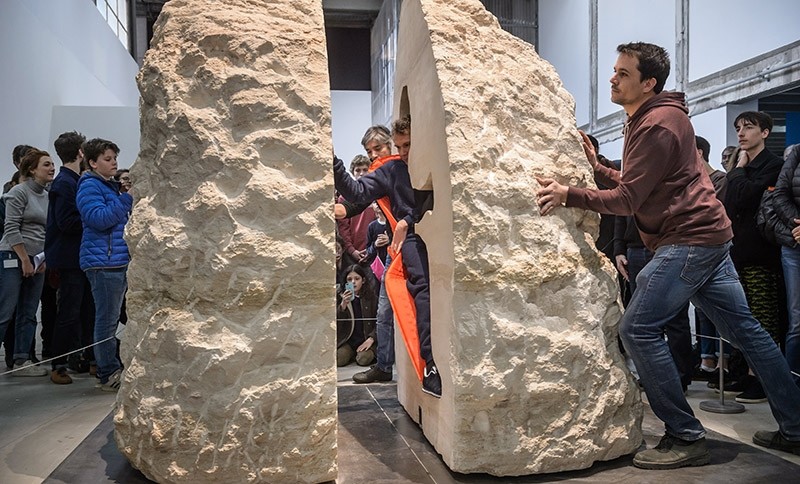 French artist Abraham Poincheval is locked up by his assistants to live inside a rock for a week, as part of an art performance entitled 'Pierre' (Stone) (EPA Photo)
by Feb 22, 2017 12:00 am

A French artist was entombed Wednesday inside a 12-ton boulder for a week, saying: "I think I can take it."

With the world's press looking on, the two halves of the limestone rock were closed on Abraham Poincheval by workmen in a Paris modern art museum.

The 44-year-old had hollowed out a hole in the rock just big enough for him to sit, with a niche to hold supplies of water, soup and dried meat.

If he survives the ordeal, the artist will then attempt to hatch a dozen eggs by sitting on them for weeks on end.

Just before he stepped inside the rock at the Palais de Tokyo museum, Poincheval told AFP that claustrophobia was the least of his worries.

"We are already locked into our own bodies," he said.

Instead he was more anxious about stopping his mind running riot during his confinement.

"We did a little test yesterday and it was absolutely incredible. It felt like like I was being carried off on a raft," the artist said.

"One of the big challenges will be to hold onto reality."

Poincheval had earlier been cagey on the rock's toilet facilities.

But as the clock ticked down he came clean to AFP, admitting he would have to sit on a small container and pee into his water bottles once he had drunk them.

He was stoic about living with his excrement. "The stone will absorb some of the smell," he said. "I think I can take it."

The artist has spent months mentally and physically preparing himself for the practicalities of life inside the rock, where he will sit up with his arms outstretched.

Holes have been bored for air and cables for a heart monitor and an emergency video link.

"We found a way of slipping the toilet container underneath me that works almost to the millimetre," Poincheval said.

His only other comforts are a cushion and a couple of books "for helping to pass the time, although I don't think I will be able to read all the time".

His reading material is certainly not light. He has packed the Polish philosopher Zygmunt Bauman's classic text "Liquid Modernity" and a new novel by French author Celine Minard, "Le Grand Jeu" (The Great Game), about a women who cuts herself off from modern life in a hi-tech mountain refuge.

Poincheval is no stranger to bizarre and hair-raising performances.

He once spent a fortnight inside a stuffed bear eating worms and beetles, was buried under a rock for eight days and navigated France's Rhone river inside a giant plastic corked bottle.

He has crossed the Alps in a barrel and last year spent a week on top of a 20-metre (65-foot) pole outside a Paris train station like the stylite saints of the early Christian church.

He has also played at being a human mole, and crossed France on foot in a straight line with a friend.

Poincheval said his new performance, which he calls "Stone", was "a voyage through geological time" where he would become the "beating heart" of the rock.

"Rocks are a living repository of time," he added.

His father, Christian, sporting a bowler hat, was on hand to wish him good luck as the rock closed around him.

His next performance "Egg" will begin on March 29, with Poincheval sitting on a dozen eggs for between three and four weeks until they hatch.

He will eat a special diet rich in ginger so he can keep the eggs at a minimum of 37 degrees Celsius (98 degrees Fahrenheit), with only a half an hour break every 24 hours to keep him from cracking.

The chicks that hatch "will go and live with my parents", Poincheval added.

But his ambitions do not end there.

His big dream is to "walk on the clouds. I have been working on it for five years, but it is not quite there yet," he add.