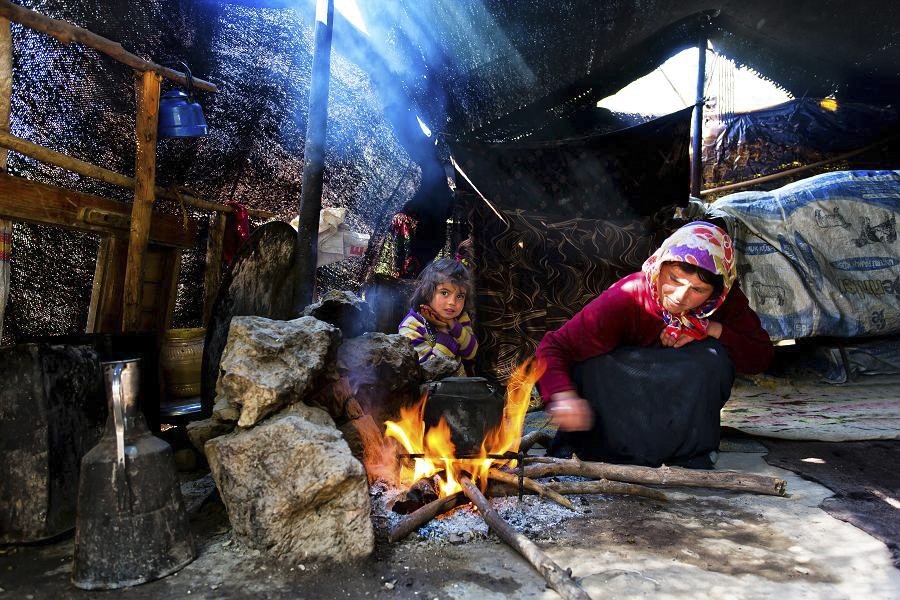 Having experienced nomadic life as a child, photography artist Mustafa Gümüş focused his camera on the Sarıkeçili people who lead a purely nomadic life in the Taurus Mountains

The work of photographer Mustafa Gümüş, whose pictures capture the lives of Turkish nomads or "Yörüks" in the Taurus Mountains, are on display in his newest exhibition titled "In pursuit of the Yörüks" at the art gallery of Vakıfbank's headquarters in Ankara.

The self-proclaimed "photographer of Anatolia," Gümüş took up photography in 2010 and has mainly focused on the lives of Yörüks since 2012. He has held five solo exhibitions since the start of his career and plans to hike to the highlands once again after his latest exhibition.

"In pursuit of the Yörüks" follows the footsteps of the Sarıkeçili people, the last of the Taurus nomads. The Sarıkeçili people live in tents throughout the year and have not yet adopted a sedentary life. The nomadic tribe is composed of about 200 families who reside in Central Anatolia, including the provinces of Karaman and Konya, in summer and southern Anatolian provinces, including Mersin, Aydın and Silifke, during the winter time. 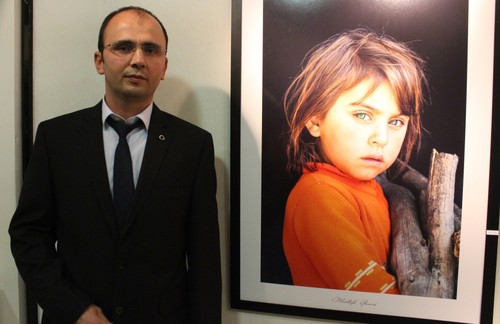 Commenting on his exhibition, Gümüş said that he prefers to focus on a single aspect of Yörük life in each of his exhibitions. "For me, the Yörüks are the true owners of Anatolia. They have always sided with the state and the nation. Trust me when I say that most of the Yörük children do not have shoes on their feet or clothes on their back but they never talk bad about the state. They always express their gratitude to God. When you are among them, you cannot deny that they are a pure and unworldly community," Gümüşsaid.

Gümüş's childhood was spent living among the Yörüks and he confesses that he often does not want to go back to an urban lifestyle when he is among them. "But, life happens," said Gümüş. "We need to get back and continue with our lives. I believe that most people miss and long for the life of the Yörüks, but it is hard for an urban dweller to get used to the nomadic lifestyle. It is a very tough lifestyle because nothing is set. They have to care for the animals and they constantly worry about them, as they might be attacked by other animals. However, those people are content with their lives. Of course, they have problems, but they try to work them out somehow. They want to keep the nomadic culture alive, though I observe them yielding to modern ways of life." 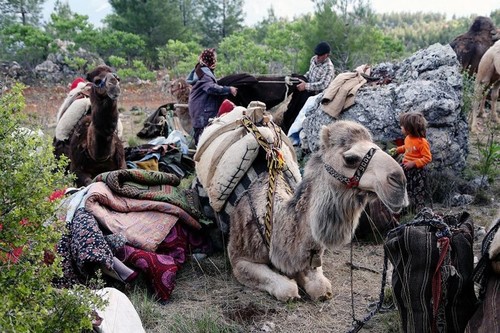 Although many photographers before him have studied Yörük life, Gümüş claims that those artists took photos of these people for a couple of days, held a few exhibitions and never turned back. "For me, these works are more than just photographs; they are the proof of my deep connection with these nomadic people. I have been working with them since 2012 and I have future projects involving the Yörüks as well," the photographer added.

Gümüş also offered insight into his project "The Children of Tent." He said,"We take presents to the Yörük children. It is not charity. This distinction is very important to us. These children go to school, but their families are not wealthy nor do they get the chance to go to the city. Some do not have shoes, clothes or stationery." Gümüş and his friends have been carrying out the "Children of Tent" project for two years now. They plan to continue the project into its third year as well. However, this time they intend to expand the project's scope. "I want to be useful to the Yörüks. In a way, I am the volunteer ambassador for the Yörüks," Gümüş said.

For Gümüş, being a photographer requires deep and wide intellectual knowledge. He believes that photographing and searching for the core of something not only benefits the viewer but the photographer himself. "One is a real photographer when he or she serves the people and the culture. For me, the priority is always Anatolia; other things come later," he added.

Gümüş believes that the hearts of the Anatolian people are as generous as the Anatolian lands themselves, explaining that: "When you go into a Yörük tent, you'll see a blue teapot. The Yörüks prefer a special blue teapot as it is the quickest way to boil the water. As soon as they see a visitor, they put the teapot on the oven, and offer you a cup of tea, accompanied by some snacks in two minutes. Since they are nomads, the Yörük cuisine is not wide and vast. They simply knead dough and cook it right away. The visitor is obliged to accept these offers or the Yörüks get offended. The visitor has to taste the offered food one way or another. To be able to understand the lifestyle of Yörüks, one needs to live among them."

Tuna Akçay, the curator of "In Pursuit of the Yörüks," said Gümüş is able to reflect the colorful lives of the Turkish nomads in his works and deliver it to his audience. "The artist features every little detail of the lives of the Yörüks with an anti-minimalist perspective. Gümüş's appreciation of the importance of objects - as he believes they are all part of the history - enriches our exhibition," Akçay said.

Claiming that it is not easy to portray the beauty around us, Akçay continued: "Everyone is able to see the beauty and take a picture of it. It is easy to capture the obvious beauty but to see and discover the hidden beauty and make people appreciate it is hard. Mustafa Gümüş managed to portray the beauty that is not too obvious to the eye and succeeded in introducing to lovers of art, a lifestyle that is falling into oblivion with time. Gümüş's most significant quality is his ability to turn art into a celebration, presenting it to thousands of people."

Gümüş's exhibition, "In Pursuit of the Yörüks," is open to visitors until March 3 at Vakıfbank Headquarters Art Gallery in Ankara.
RELATED TOPICS