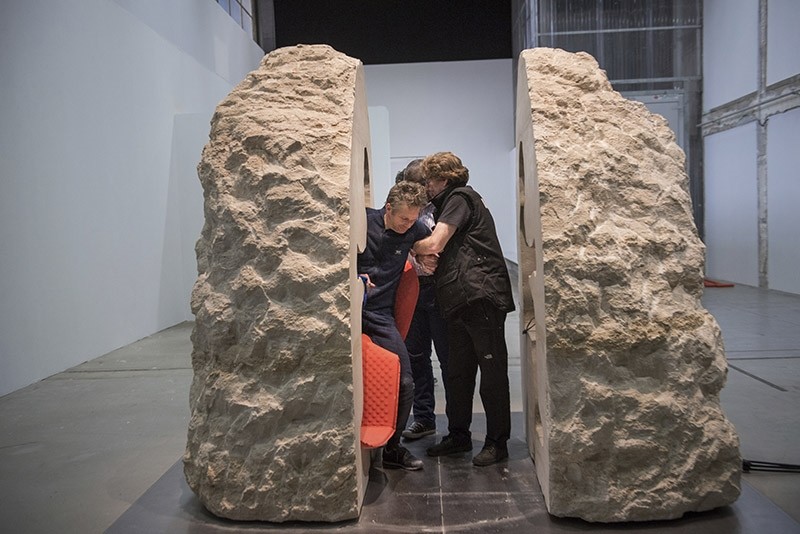 Employees help French artist Abraham Poincheval is pulled apart the two halves of the rock in which he been entombed, in Paris, Wednesday, March 1, 2017. (AP Photo)
by Compiled from Wire Services Mar 03, 2017 12:00 am

French artist Abraham Poincheval was freed from a block of stone in a Paris museum on Wednesday after spending seven days enclosed in it.

He entombed himself in a body-shaped slot carved in a 12-ton limestone boulder on Feb 22 at Paris' Palais de Tokyo contemporary art museum.

Poincheval, 44, ate stewed fruit and purees while breathing through an air vent. He had some personal items such as a log book and an emergency phone line.

On Wednesday, workmen pulled apart the two halves of the rock and Poincheval gingerly climbed out. He made a V-for-victory sign as two men helped him to a chair at the Palais de Tokyo gallery.

"I'm a little dazed, which I imagine is totally normal after one week living in a rock (...) which hosted me well. I thank it very much for having been so enthusiastic about welcoming me," he told reporters minutes after his release.

"It's this strange feeling of a floating world, an incredible floating in this mineral capsule," he said after undergoing a post-experiment medical exam.

"Yes, there were very long moments of loss of self, where suddenly (...) you no longer know where you are, but you are there, and that is what was great (about it)," he added.

Poincheval specializes in endurance-testing solitary performances. In 2014, he spent 13 days living inside a hollowed-out bear sculpture, eating worms and beetles to mirror a bear's diet.

His next performance will involve sitting on eggs in an attempt to hatch them.