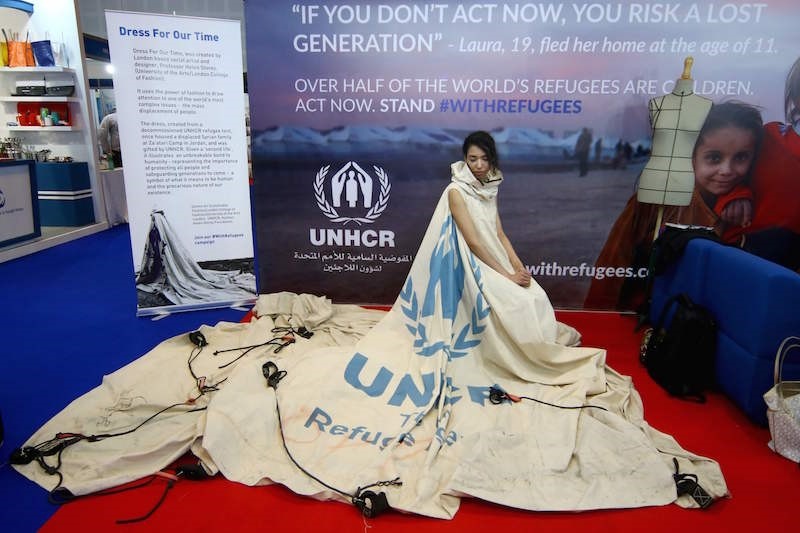 Project ambassador of ,Dress For Our Time, Louise Owen models a UN tent from the Zaatari camp in Jordan that has been converted into a dress by fashion academic Helen Storey. (AFP Photo)
by French Press Agency - AFP
Mar 23, 2017 12:00 am

A UN refugee tent home has found a new life as a dress, while still bearing the marks of its past.

"Dress for Our Time", the brainchild of fashion designer Helen Storey, has turned a discarded tent from the Zaatari refugee camp in Jordan into a hooded dress featured on stage at the Glastonbury Festival and in the conference halls of Dubai.

Now on display at the Dubai International Humanitarian Aid and Development Conference and Exhibition, the project aims to introduce the reality of refugee life to audiences who may be physically and politically removed from the conflict.

"We're using fashion as sort of a Trojan horse, and from that you're able to talk about something that's more serious... a crisis that involves all of us," said Storey, professor of fashion and science at the University of the Arts, London.

"It was important for me that it did have a history and it was genuinely the shelter to a family, and I think it's that narrative that helps give the piece resonance with people."

The tent was discarded when the UN refugee agency, the UNHCR, began to install cabins at the Zaatari camp on the border with war-ravaged Syria.

Storey preserved the condition of the tent as she had found it: a stained piece of beige tarp imprinted with the blue UNHCR logo, the remains of a message scribbled in orange marker faded but still visible.

The dress has in the past year made its way down the sidewalks of London to Glastonbury, where Malian singer Rokia Traore wore it on stage last year.

Reactions to the dress have run the gamut, from confused to amused to touched.

"In London there's a lot of stopping and staring," said project ambassador Louise Owen, who also modeled the dress at the conference in Dubai.

"We had a Syrian artist here burst into tears when she saw me in the dress," Owen said.

"It had touched her in a way it wouldn't anybody in London."

And while the garment will continue to take its story around the world, one place it will not be returning is the Zaatari camp.

"I've taken the view that it's inappropriate to take it back," said Storey.

"It's our part of the world that needs education.

"It's really a tool to help the Western part of the world be less defensive about this."

Syria's devastating civil war, now in its seventh year, has rendered more than half the country's population refugees.

The conflict has left more than 320,000 people dead, according to the Syrian Observatory for Human Rights.