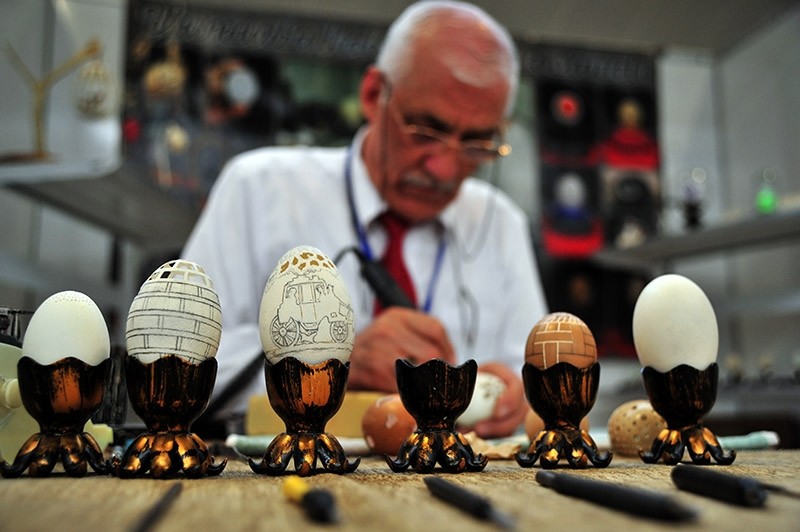 61-year-old Hamit Hayran began creating eggshell art when he was 32 in the Gölbaşı district of Ankara after he had a work accident that left him confined to the bed for three years.

He was working on the fourth floor of an apartment building when a dangling long iron pipe passed 34 thousand volts of electricity into the building.

Hayran told Anadolu Agency at an event in Bursa that after the accident left him disabled, he was holding on to life with eggshells.

"I failed a lot at first, but I was always patient. Eventually I was successful," Hayran said.

Expressing that he still loves the craft after decades of work Hayran added, "I try to give life to the fragile and breakable. I work with all kinds of eggshells available in Turkey. I decorate the eggshells from birds including the Indian bulbul, canary, budgerigar, quail, partridge, pigeon, pheasant, cormorant, goose, peacock, turkey, duck and chicken."

In addition to doing carpentry before the accident, Hayran was interested in inlay and "naht" art.

"It can be broken, don't people break each other's hearts? Just because someone broke my heart, I don't have to treat them as my enemy. They should be loved. The same thing can be applied to eggs. I engrave the beautiful emotions of people on eggs, in the form of shaping and carving," Hayran continued.

Hayran has worked with thousands of eggshells to date and stressed that patience is the most import factor in the art of shell carving.

"If you start with patience, it will finish that way," he added.