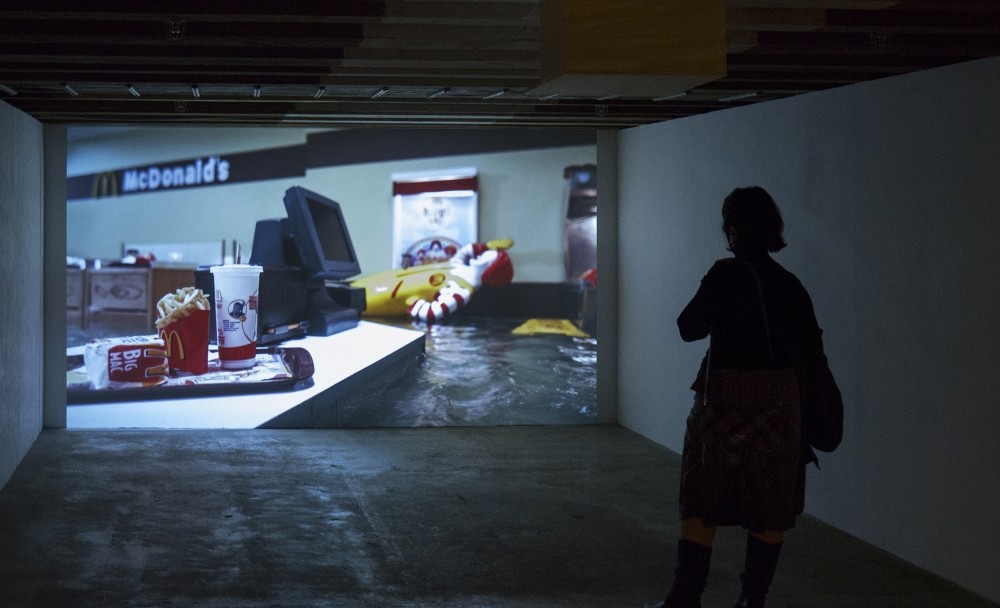 In u201cFlooded McDonaldu2019s,u201d we see hamburgers, french fries, coke, toys floating, passing by camera, as well as the restaurantu2019s furniture. Towards the end, when everything is submerged and image of video becomes blurry, everything becomes obscured.
by Cihad Caner Apr 25, 2017 12:00 am

Turkish artist TUNCA is part of a dual exhibition in Amsterdam, inviting all to partake in edible artwork created by the artist himself

Amsterdam's art project space, "Corridor" is featuring a dual show from Turkish artist Tunca Subaşı, known as TUNCA, and Danish group Superflex in an exhibition that can be visited until May 19 titled, "Water Was Here Before."

It was a long and tiring day for me as I ventured out to see some exhibitions in Amsterdam. Fortunately, I ended up at the "Corridor" project space to attend the opening. I was very excited to enjoy the warm dinner promised to attendees of the opening, made by yours truly, famous Turkish artist TUNCA, who had promised to cook food for his visitors.

The exhibition, "Water Was Here Before" welcomed me with a large book suitable for a coffee table, resembling a restaurant menu on a pedestal like those you may see at the entrance of restaurants everywhere that offer guests a quick check of the dinner or lunch menu complete with dish prices, of course. 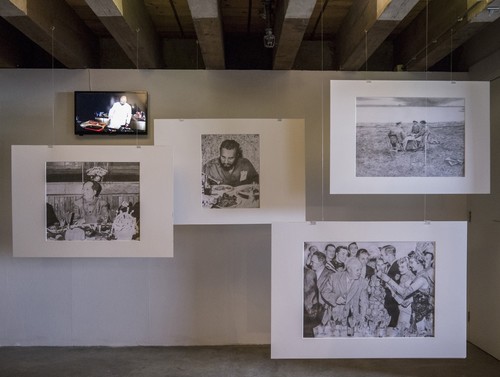 Six black and white hyper-realistic drawings, hanging from the ceiling, show famous dictators such as Stalin, Mao, and Che Guevara, while they are having dinner.

The book featured some well-known politicians in some not-so-recognizable, hyper-realistic, hand-drawn illustrations, depicting them eating their favorite foods. These drawings and the menu itself mimic the atmosphere of a traditional restaurant and I inadvertently felt as though I needed to wait for a waiter or waitress to guide me to a table.

After eyeing the metaphoric menu and choosing my "food," I was served the "Borscht Soup" figuratively speaking, a soup that TUNCA had made specifically for this opening event. The soup itself is historically significant as it is the favorite food of Russian politician Nikita Khrushchev, who led the Soviet Union during the Cold War.

After looking through the menu book, I noticed that on the right side of it there were six black-and-white, larger-than-life drawings. These drawings were hanging from the ceiling and depicted famous dictators such as Joseph Stalin, Mao and Che Guevara having dinner.

Between the black-and-white illustrations, there was also a two-channel video being shown on the wall. "Desire" (2014) is a 16-minute video that shows the artist preparing the favorite foods of famous dictators. "Desire" has all the aesthetics of a "how-to-cook" video complete with instructional narrative. 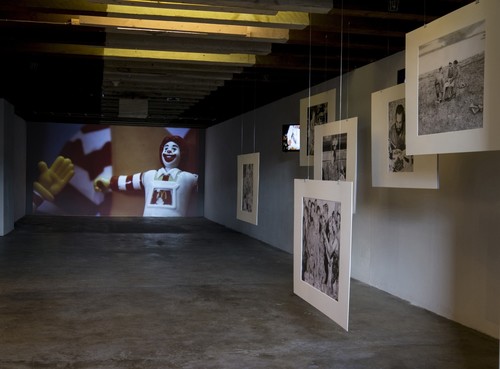 Between the black and white drawings, there is a two-channel video on the wall titled "Desire," which is a 16-minute video that shows the artist's preparation for the dictators' favorite foods.

It is clear in the way that he handles the kitchen tools that the artist is well-trained in culinary art and, as he explained to me, a professional cook has educated the artist in a six-month course where he learned how to cook for the project. He completed an internship with a major restaurant under a world-renowned chef and this training helped him to make his performance in the video quite superb.

TUNCA provides step-by-step instructions on how to cook the favorite foods of political dictators in the drawings that hang from the ceiling. The video, along with the illustrations, provide a clear depiction of the connection between the two elements, leading us to realize that the practice of culinary arts and drawing are quite similar.

In Anatolian cultural traditions, food sharing is an important component of daily life. Sometimes, families cook more than enough food to share it with their neighbors. In TUNCA's case, this tradition is highly significant. His work opens a space for visitors to participate in the show by actually eating the artwork itself.

This participatory approach is not like the interactive installations that we typically see in the digital age. To the contrary, it is analogous and based on conversation, collective sharing and enjoyment, which establishes a contrasting relation to the politicians' position.

The restaurant atmosphere transforms itself beyond its mimicked form as the show nears completion. TUNCA's works at "Corridor" are more than mere objects of passive art. Instead, his works make a deep, profound connection between the visitors and the art work itself, thanks to his participatory approach.

The other part of the show is a video project created by well-known Danish artist group Superflex. "Flooded McDonald's" (2009) is a film that was shot in a life-size replica of a McDonald's restaurant. The scene depicts an empty restaurant that gradually becomes flooded. We see hamburgers, French fries, Coca-Cola and toys floating and passing by the camera alongside the restaurant's furniture. Toward the end, when everything is submerged and the image of the video becomes blurry, the viewer can no longer see anything properly.

"Flooded McDonald's" is quite similar to the post-apocalyptic aesthetics of a Hollywood movie. However, this might not be so futuristic considering the world we currently live in. According to new data published by NASA, July 2016 was the hottest month our planet has seen since we started recording temperatures 136 years ago. Icebergs are melting and sea levels are rising. Fittingly, the average altitude in the Netherlands is well below sea level.

Now, we are living in the time of Anthropocene, where human activities have begun to be significant to the Earth's geology and ecosystems. "Flooded McDonald's" shows us the reality of the near future, the causes of the global warming phenomenon and the effects of the mass production, mass consumerism and the role of mega, multinational companies.

The "Corridor" project space was founded by Suzan Kalle and Suat Öğüt in Amsterdam in 2015 with its own exhibition space situated both in a project space and a public area. Kalle and Öğüt initiate projects in which artists, writers, curators, activists and theorists can meet, collaborate and work together on projects with aims to blend multiple art forms in exhibitions such as this one. "Corridor" gained the support of Turkey's SAHA Foundation for the 2016-2017 period.