A ghost choir assembles in a medieval court to discuss Taqiyya 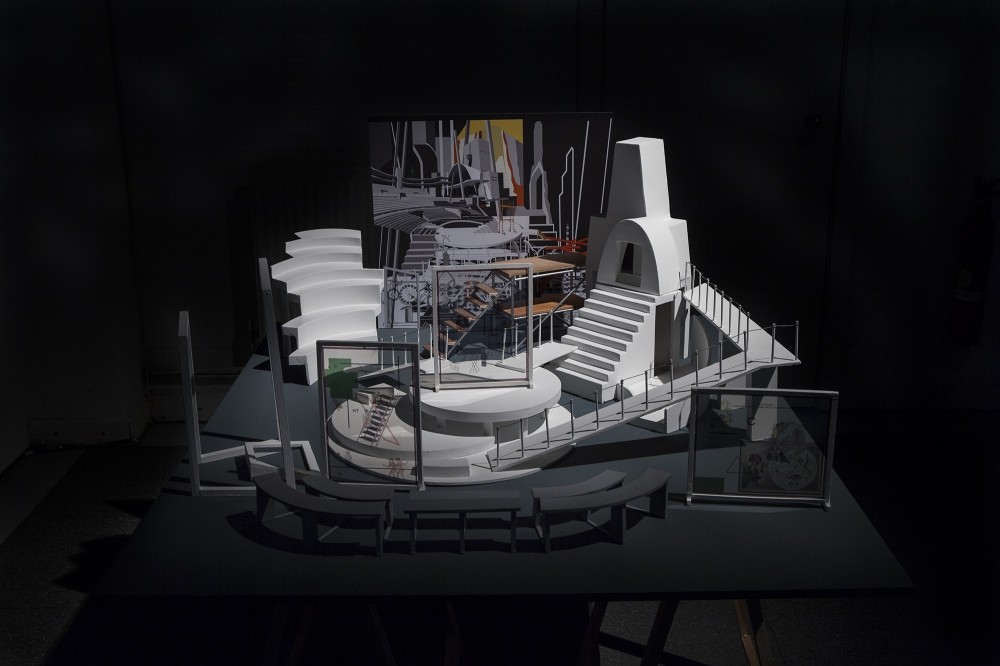 Rana Hamadehu2019s site specific installation consists of different elements such as sound, light boxes, special footage and music stands. The room welcomes you with a repetitive ticktock of a vintage clock.
by Cihad Caner May 02, 2017 12:00 am

The eighth edition of Contour Biennale in Mechelen, Belgium, discusses ‘Justice as a Medium' in terms of the media

On a cold spring day, I arrived in the Belgian city of Mechelen, one of the oldest European cities where you can still feel the medieval times. The purpose of my visit was to attend the Contour Biennale that was founded in 2003 in Mechelen. The biennale's main focus is moving imagery and its expanding representations through installations, sound and performance. This is the eighth edition of the event titled, "Polyphonic Worlds: Justice as a Medium."

The biennale focuses on the "relations between contemporary artistic practice and the course of social justice against the 400-year old juridical past of Mechelen's Great Council," which was Europe's first courthouse. From the vestiges of this judicial infrastructure, it explores the meaning behind surveying the field of social justice while implementing archaeology as a media form in such a way that justice itself is considered a "medium that is simultaneously a performative, ethical and aesthetic operation," according to curator Natasha Ginwala. The Contour Biennale features 25 artists and collectives in total. The exhibitions were spread out across eight different venues, most of them historical sites related to the history of law, civic rituals and the passage of medieval governance in the city of Mechelen.

The first venue is "Garage," which is the main building of the event. "Garage" hosts nine artists, the most interesting of which is HoTzu Nyen's (1976, Singapore) CGI video titled, "NO MAN II" (2017) in a pitch-black room. You enter the black room and even the screen is not very bright, meaning your eyes need time to get used to the dark before you will view the 360-minute long video. The video shows a ghost choir. The characters in the ghost choir look like hybrid game characters, human-animals, cyborgs, skeletons and anatomical figures. Nyen's video plays with different realties through his computer-generated, moving images reflected on a two-sided mirror where he divides these multiple realities. It was a good choice to use the pitch-black space because the realities that he suggests are not easily observable, therefore, our eyes need time to see his suggestions. Plato's allegory of the cave must be a good reference for the artist as well because this was the feeling the video evoked in me when I left. 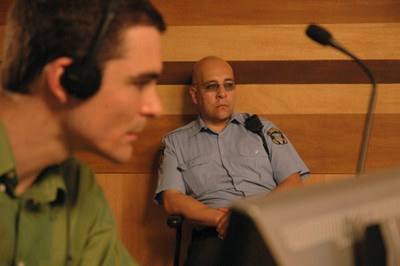 Surveillance culture is becoming more and more common in our lives. Streets, shops, our phones and basically everything is being watched by governments or other "big brothers." Judy Radul's (1962, Canada) project called, "The Book of Glass" (2017) responds to these points in our daily lives by using the surveillance cameras of shops. You sit on a bench where you have two screens in front of you and the images on the screens come through these cameras that are recording live from outside of the building or throughout different corners of the room. You, as a visitor, become the observer through the automated surveillance cameras but at a certain point, the cameras turn to you and your status changes as you morph into the one being observed.

Rana Hamadeh's (1983, Beirut) site specific installation "Sketch No:1 On Proxy-Bodies" (2017) is placed in the basement of the oldest surviving, stone-laid city hall in Belgium from the 13th century. Hamadeh's installation consists of different elements such as sound, light boxes, special footage and music stands. The room welcomes you with a repetitive rhythmic echoing the ticktock sounds of a metronome.

On one of the music stands, Hamadeh uses text and a microphone and visitors can read the text loudly while their voices echo, becoming part of the repetitive sounds of the installation. The echoing sound of the visitor disappears at a certain point while the metronome keeps time. Hamadeh produces a spectacular space where visitors can easily get confused as every part of the site-specific installation looks like it belongs to different artists. However, when you find the connection between different components of the installation, it opens itself up to you and speaks to you. She describes her practice as a "curatorial approach," which can be seen clearly in this work. Her emphasis is not on one piece of artwork but rather on multiple topics ranging from militarism and the infrastructure of justice to different components of the media. 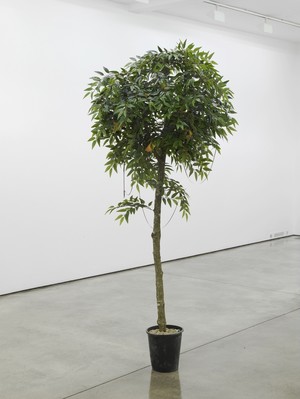 For me, the last venue of the Biennale was the "Court of Savoy." While this court is still active, it was interesting to see the lawyers, defendants and complainants while I was listening to Lawrence Abu Hamdan's (1985, Amman) sound installation, which was installed to the Baroque garden of the court. Hamdan wrapped old cassette tapes over the trees and bushes and placed stone look-alike loud speakers in the corners of the garden. This wrapping method is used in Lebanon to eliminate insects and birds from trees. The artist took a mini-cassette tape from trees and harvested the voice that was magnetized to its surface. He listened to it again and again and found that the sounds were from a book or a manifesto on the concept of "Taqiyya." "Taqiyya" was understood in the Islamic juridical system as having the right to tell a lie in some conditions. Hamdan presents fragments of the tape that were able to be saved. Presenting this installation in this active court's Baroque garden is an interesting contradiction that belies its surroundings. So, Hamdan raises the question, In what cases do we have the right to lie?

This was not my first encounter with Eric Baudelaire's (1973, Salt Lake City) work "Also Known As Jihadi" (2017). I had previously watched the film during the Rotterdam Film Festival at the beginning of this year at the Witte de Wit Contemporary Centre. The artist made a movie about French extremists. Although it sounds cliche, how he made the movie is not. Baudelaire used written official judicial documents (testimonies and records from the court), along with footage he shot in France and Turkey. This seems like a documentary but in actuality it is not. We do not see any "heads" talking about their relatives or peers or about how they became extremist like we would in classic documentaries. There is no voice-over, either. By becoming more objective about the topic compared to previous producers, he creates a unique piece. The film successfully keeps you on the edge of your seat in the waiting room of the civil court while the film teeters on the edge between documentary and fiction.

The Contour Biennale was one of the most profound art events I have visited recently. The artists that Ginwala has chosen fit well with the subjects that she aimed to discuss. It is sublimely curated; it was like some of the artworks were specifically made for the venues. The biennale tries to answer some of the hot topics of the art world like migration, justice, surveillance, militarism and gender politics. I recommend that you visit Mechelen (25 minutes from Brussels and Antwerp) if you are planning to travel to Belgium in the next few weeks.