With 'Now You Are Far Away,' Merve Ünsal explores utterances 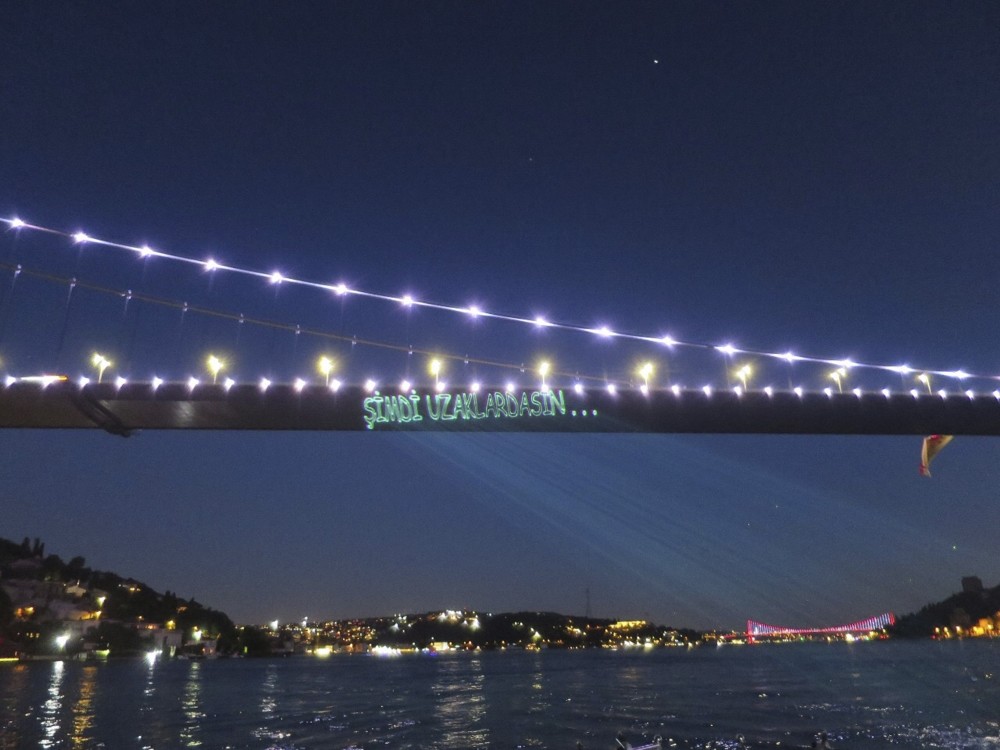 At Istanbul's Galerist, Turkish artist Merve Ünsal takes a classic song by Zeki Müren as starting point for a show that looks at the subtleties of utterances

On a casual boat ride with friends last year, Turkish artist Merve Ünsal came across a marriage proposal that was projected onto the Bosporus Bridge. She realized that the laser projection was originating from a boat that was bathed in light and music. This personalized marriage proposal that danced on the bottom of the bridge left a strong impression on the artist. She saw how this could be one of the best ways to infiltrate the public realm. As a gesture, the projected marriage proposal was infinitely intriguing. Upon researching the practice in the following days, Ünsal realized how easy it was to purchase these proposal or celebration packages since numerous companies were offering similar services.

The name of Ünsal's new exhibition at Istanbul's Galerist gallery, "Now You Are Far Away," and the title of the performance she staged during its opening last week, were inspired by this momentous boat ride. The source of that phrase is of course the title of Zeki Müren's famous song. While preparing for her show, Ünsal wanted to use a phrase that meant something to everyone, that could be romantically charged, while also feeling ambiguous to the viewer.

"'Şimdi Uzaklardasın' became an obvious choice for many reasons," she said in an interview. "The subject of this phrase is relatively unclear, the temporality and the specificity of the yearning are quite compelling, and I was also interested in the notion of distance. Specifically, this work refers to my relationship with imagery and image-making, the ever-lasting contention with representation."

Ünsal's new exhibition consists of three bodies of work. "Now You Are Far Away" is presented at Galerist in the form of a film that documents the projection of the phrase onto the bridge. The event was choreographed on the boat with Aslı Seven, the curator of the exhibition. Together, Seven and Ünsal asked the small group of people on the boat with them to share manifestations of the "unutterable." In the exhibition, the results of that survey are presented as a sound recording and reproductions of the contributions by visitors. The idea, said Ünsal, was to create parallel events, one private, one public, while thinking about utterances. 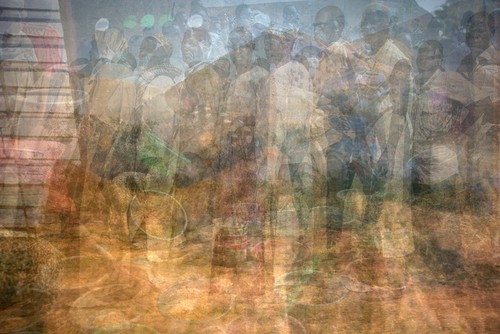 With its title and instrumentalization of a bridge connecting continents, Ünsal's work raises questions about distances, both physical and mental, which is particularly interesting for our age of digital romance where, thanks to the advance of technology, age old concepts of location and time have been dramatically unsettled.

"To repeat a cliche, I don't think of technology or the wider dissemination of information to bridge distances," Ünsal said. "If anything, it accentuates the already-existing distances and reinforces them. At the end of the day, instead of listening to suffering and the pain of others on the radio, I am able to literally touch their representations from the comfort of my bed. This only serves to open up the distances."

The second part of the show, "New York Time Photographs," consists of composite images made by using an automated process that corresponds to the headlines the series of images purportedly represent.

"If you can tell a story in 10 images, why not tell it in just one," Ünsal asked. "I also wanted to see if there was a visual language specific to regions, situations and disasters and found that this was indeed the case. I've been working on this visual archive for nine years now, and by now I recognize certain patterns in telling certain stories."

In all these works, the void between representation and reality had been Ünsal's main problem. "Representation or lack thereof concerns all artists, but I think photography or lens-based media in general are particularly plagued by it," she said. "I was trained as a photographer, and I have a deeply entrenched weakness for photography. My work is a negotiation of that desire to take photographs and the tension of my wariness about representation. What does it mean to work with images? This is a central question for me."

The third part of Ünsal's work has the intriguing title "From a window," which the artist describes as "a literal interpretation of looking out the window, thinking to make work, situating stream of consciousness in the image." But it is the show's eponymous work that most strongly stays in the mind upon seeing "Now You Are Far Away."

"The song's role in my life is the same as it is for anybody who lives here," Ünsal said. "I heard it many times, I know the lyrics, and it reminds me of a state of mind that one often has sitting by the Mediterranean, missing something, desiring something and not really knowing what that is. Do I have a deep connection with the song? No more or less than anybody else, but I do believe that the image of Zeki Müren means something to us today that differs from what it had back when he was alive. The ambiguous gender-identity that was embraced by many is something that-I'm projecting here-might not be so possible at the moment. Is this a symptom? Maybe."