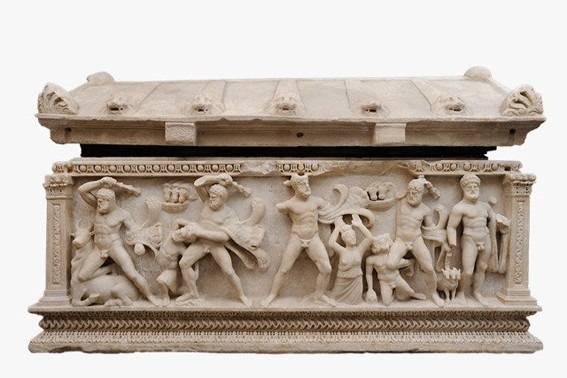 The Minister of Culture and Tourism, Nabi Avcı, recently attended the opening ceremony for the tomb of Heracles's last exhibition in Geneva before its return home to Antalya in September.

Reiterating that Turkey strongly supports initiatives for the restitution of cultural property taken out of the country illegally, Minister Avcı stated that they have also cooperated with the United Nations, Interpol and ICOM to protect the cultural heritage in conflict zones like Syria and Iraq.

Confiscated by Switzerland's Geneva customs in 2010 and found to have originated from Turkey, it was decided that the Tomb of Heracles should be returned to Turkey as a result of the inquiry conducted by the Geneva Attorney-General's department in 2015. Filing an appeal, the counter defendant objected to the restitution. However, as a result of the defendant's withdrawal from the appeal, the decision of restitution was finalized. With the consensus of both countries, the tomb will be exhibited at Geneva University for three months before being returned to Turkey.

Speaking at the opening ceremony, Avcı said the restitution process heralds a new phase in Turkey's decades-long struggle to retrieve stolen antiquities, and added, "This success will function as an encouraging example both for source countries and for the official authorities and the investors of the market countries they were taken to.

Avcı highlighted that the illegal removal of cultural property negatively affects the entire world, not just the culture of one country since it breaks an artifact's geographic, cultural and artistic connections. "There are various ways of solving the illicit traffic of antiquities. Corporations dealing with the issue have to adopt a serious attitude regarding the problem. In this context, first I want to say that Turkey strongly supports the 1970 UNESCO Convention and the projects conducted under the convention. We are determined to evaluate all of the cooperation opportunities with the aim of fortifying our agents, all of which will improve the effectiveness of such official organizations," he explained.

Avcı also stated that Turkey will do its best to closely follow the issue via its subcommittee membership and spokesmanship. The minister also stressed that Turkey will continue carrying out the necessary procedures for the successful restitution of all cultural property illegally taken out of Turkey.

The Tomb of Heracles

With a height of approximately 135 centimeters (53 inches) and width of 112 centimeters, the 3,000-kilogram (6,600-pound) tomb has been dubbed "Torre Nove" in the archaeological literature. Categorized under "Asia Minor Tombstones," the Tomb of Heracles was found in the necropolis of the Perge Ancient City, located in Antalya's Aksu district. Illegally taken out of Turkey, the tomb displays 12 different figures of Heracles.