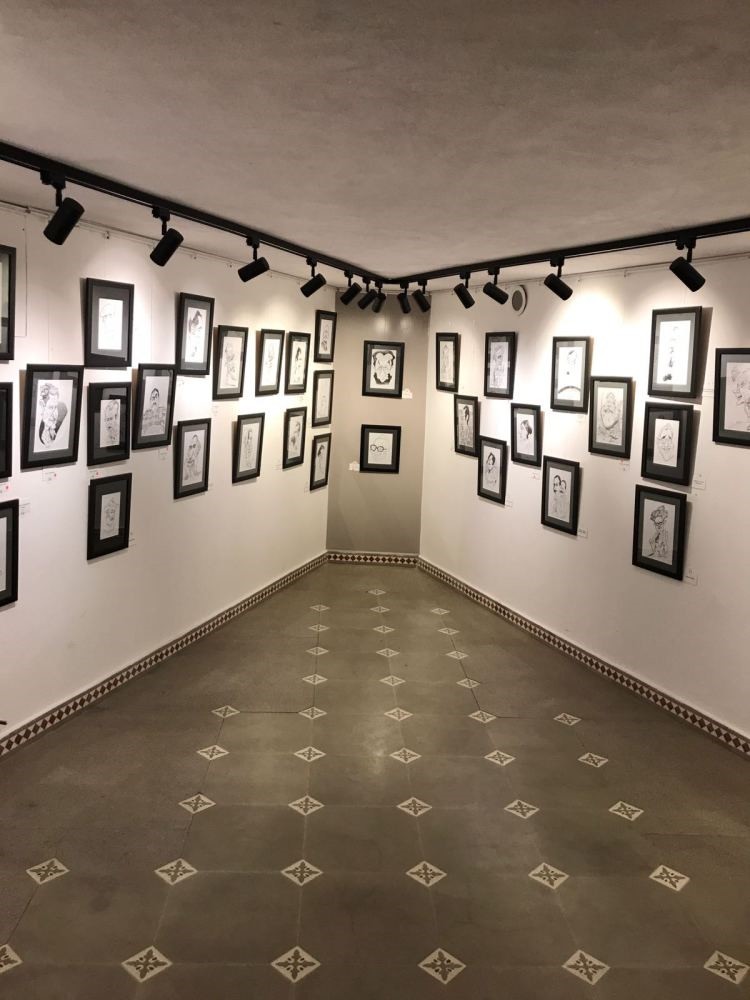 Nail Kitabevi, a popular bookstore in Istanbul is hosting a literary caricature exhibition by Abdülkadir Elçioğlu, better known by his nickname ‘Aptulika.' The exhibition, titled ‘From Sait Faik to Franz Kafka' features works by popular world and Turkish literary figures

The basement art gallery and book-lined stairway inside Nail Kitabevi Bookstore and Cafe is currently exhibiting "Sait Faik'ten Kafka'ya" ("From Sait Faik to Franz Kafka"), a series of literary caricatures by the comic artist Aptulika from July 1-29.

Art lover and publisher Erhan Nailoğlu bought the historic building that is now Nail Kitabevi from a barber named Muzaffer and spent over two years restoring its 19th century Baroque and Rococo interiors originally designed by the Balyan Brothers, whose family worked on some 150 buildings in Istanbul, including at Dolmabahçe. It is the Flatiron Building of the Bosphorus as its ornate second-story cumba bay window hangs over the triangle corner where Icadiye Avenue meets Bereketli Street in the heart of the Anatolian neighborhood of Kuzguncuk. 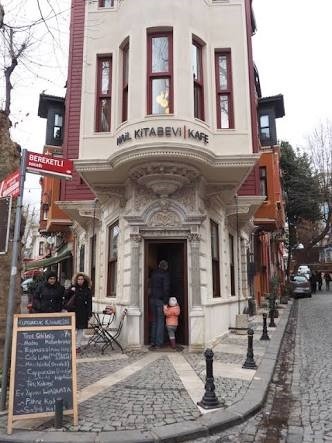 Sixty-five portraits are on display at Sait Faik'ten Kafka'ya, the first being that of the "island dweller" and hero of the Turkish short story, Sait Faik to the last, that peerless man of irresistibly unique letters who famously died unsung and in poverty yet whose celebrated works continue to employ countless disciples in his name, Franz Kafka.

The pantheon of international literary icons by Aptulika humorously and sharply follows in the great tradition of caricature, evoking the psychological characteristics of its subjects with clever disproportional emphases.

Orhan Pamuk is straight and narrow, his over-bespectacled face like one big rectangular pencil without an eraser, while Victor Hugo salutes his head off.

Jose Saramago is unraveling from the chest up as Chekhov is tangled down to the ankles by his glasses chain.

Emre Kongar is vanishing but for the outline of his glasses as Bedri Rahmi Eyüboğlu is telling lies with his Pinocchio-sized schnoz.

Can Yücel and Charles Bukowski are drinking buddies.

Michel Foucault is a thought bubble while Oktay Rıfat has tea in an inner-city neighborhood on the Bosphorus.

Oğuz Atay sits on his flying carpet manuscript of The Disconnected (Tutunamayanlar) as Rıfat Ilgaz walks chained to the book that imprisoned him.

Sherlock Holmes appears in the shadow of Arthur Conan Doyle as Ernest Hemingway is weighed down by hunting gear and an enormous beard.

Stefan Zweig is a ventriloquist while Sait Faik makes a solitary venture to Burgaz Ada.

George Orwell dons a brick coat as Thomas Mann swings from twists of his mustache.

With pieces going for as much as TL 600 ($175) a pop, they're hot items on the affordable art market. Drawn over the last few years, the caricatures of Proust and Zweig stand out as the most perceptive and witty, philosophical even, telling the story of each author in a thousand invisible words written in the language of graphic art.

Aptulika is not a stranger to pop culture aesthetics and to the campaign to clarify and visualize and reimagine the great creative yarn of civilization. He typically fuses heavy metal aesthetics with his comics and caricatures, as the signature font of his artist name, Aptulika is an homage to Metallica.

After graduating from Mimar Sinan in 1987, he first drew for "Gırgır" ("Fun"), an illustrated satire rag comparable to Charlie Hebdo. Two years later, he formed Hıbır, a new graphic magazine with his former colleagues at Gırgır, where he led the way as a voice of the slacker generation, renowned for his apathetic characters steeped in the glutted ennuis of university life.

While drawing at Hıbır, he wrote articles on rock music and heavy metal, most recently culminating in a collaborative effort to illustrate a book with Murat Beşer (titled: "Yoldan Çıkmış Similar), an anthology of alternative Turkish rock. The book is for sale at the Nail Kitabevi Art Gallery along with "Başkomser Nevzat" ("Nevzat, the Chief Inspector"), a graphic novel by the prominent Turkish writer Ahmet Ümit, who is also among the caricatures exhibited at Sait Faik'ten Kafka'ya.

Lately, Aptulika formed another graphic publication with fellow artists under Cumhuriyet known as Dinozor. He is one of a long line of fine artists who have exhibited work in the basement art gallery at Nail Kitabevi, where creative gems from the likes of Feryal Özen, Merve Turan, Mine Çelengil Göker and many others have been on display since the bookstore began its art gallery in March of 2016.

Nail Kitabevi is unplugged, void of house Wi-Fi. Since opening in June of 2015, patrons and visitors to its cafe, bookstore and art gallery have come for a peace of mind and a strong coffee, for fine art and a good book, and most importantly to focus in on the clear creative visions that fill it wall-to-wall with inspiration.