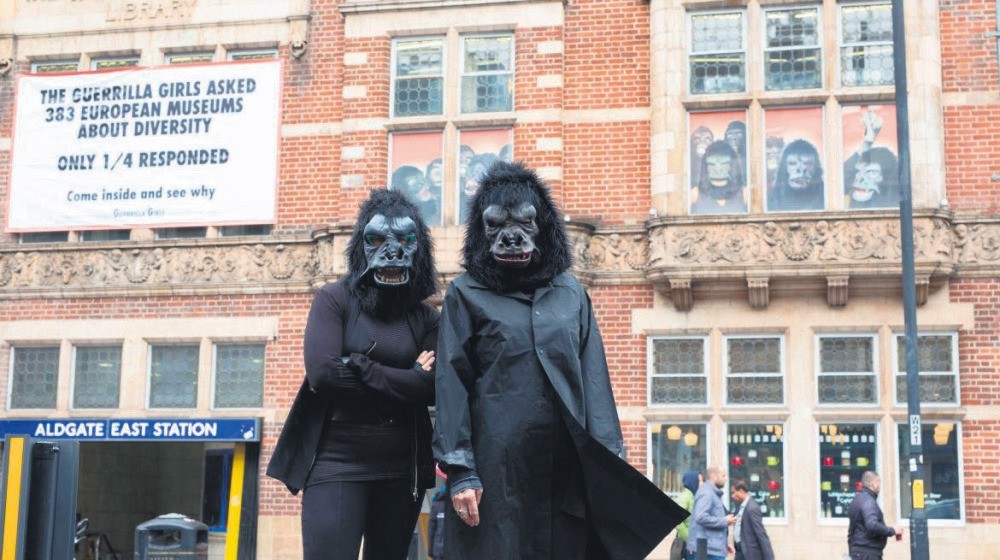 Guerilla Girls is an anonymous group of radical feminist and female artists devoted to fighting sexism and racism within the art world.
by Kaya Genç Aug 05, 2017 12:00 am

This summer, one of Dolapdere's leading art galleries, Gaia, hosts a new exhibition organized by a 30-year-old art initiative that has made a name for itself by covering gender inequality in the arts

Many Istanbulites have been surprised to witness the swift transformation of Dolapdere, a neighborhood famous for its car repair shops, into a fashionable quarter for lovers of contemporary art in the course of just a few months. But not many, I suspect, were expecting to see shows traveling from London's leading art galleries to the neighborhood this fast. With its new exhibition co-organized by Whitechapel Gallery, Gaia, one of the galleries responsible for Dolapdere's transformation, has just done that and people have been noticing.

"Is it Even Worse in Europe?" is the title of a highly critical exhibition by Guerrilla Girls, the anonymous feminist activist group that has been struggling against racism and sexism in the art world over the past 30 years. Co-curated by Xavier Arakistain and Nayia Yiakoumaki, the new Guerrilla Girls exhibition references "It's Even Worse in Europe," a poster put out by the group three decades ago, in 1986. Is there enough diversity in Europe's leading art organizations? This is the central question of a show that is filled with numerous surprises, some entertaining and others quite worrying.

In 2016, the group sent a questionnaire about diversity to 383 museums and art spaces. "What percentage of artists (not works) in your collection are women?" is the opening, crucial question of that study. "How many women have had one person exhibitions at your institution over the past five years?" 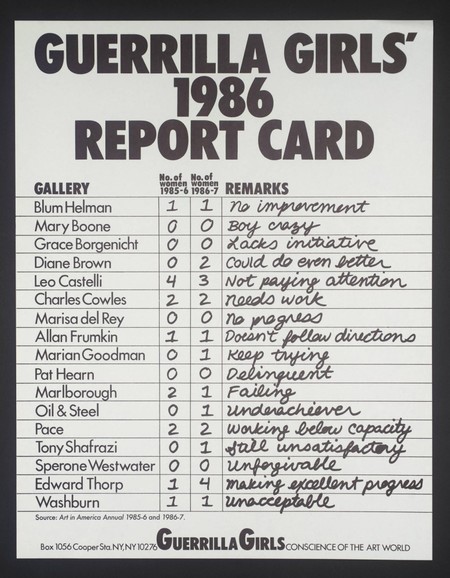 Art professionals running galleries and museums were expected to answer the questions directly and some of them had. But a great number of institutions didn't care or dare. On the floor of Gaia Gallery, their names are listed in a punitive and sarcastic manner. "Institutions that didn't answer our questionnaire are listed here," the heading of the text on the floor reads. "Feel free to walk on them. Love, Guerrilla Girls."

Other questions in the questionnaire are equally significant, pointing to the inherent racism of the art world. "How many artists in your collection and/or exhibition program are from Africa, Asia, South Asia and/or South America? How many one-person exhibitions by artists from these regions have you done in the last five years?"

The feminist initiative has always been anonymous, and this had been one of their strengths. "We wear gorilla masks in public and use facts, humor and outrageous visuals to expose gender and ethnic bias as well as corruption in politics, art, film and pop culture," they say. "Our anonymity keeps the focus on the issues and away from who we might be: We could be anyone and we are everywhere."

The group has put out posters, books, stickers and videos in cities like London, Mexico City, Los Angeles, Bilbao, Rotterdam, Shanghai and Sao Paolo. In 2015 on the facade of New York's Whitney Museum they projected a text about how income inequality had been defining the art world.

For the Gaia show, Guerrilla Girls exhibit the answers to the questionnaire in a humorous and disturbing way. The answers given to the question about what keeps museum directors up at night, include political oppression (Muzeum Wspolczesne Wroclaw, Poland), the increasing privatization of the public realm (Modern Art Oxford, United Kingdom) and to change from a model of separation, quality, and connoisseurship to a 'contemporary' model of holistic, inclusive, and deviant practices (Van Abbemuseum, Eindhoven, Netherlands).

One of the stickers given to viewers at the exhibition refers to statistics from the Metropolitan Museum of Art and points to how "less than four percent of the artists in Modern Art sections are women, but 76 percent of the nudes are female." This leads to the obvious question about whether women have to be naked to get into the Metropolitan Museum. Another sticker questions the inequalities of the art world, pointing to the absurdity of billionaire art collectors not paying their employees a living wage.

"We believe in an intersectional feminism that fights discrimination and supports human rights for all people and all genders," the group says. "We undermine the idea of a mainstream narrative by revealing the understory, the subtext, the overlooked and the downright unfair."

Guerrilla Girls are determined to go after museums and art institutions and scrutinize them for their bad behavior. They have had retrospectives in Madrid and Bilbao. Recently they showed work in Cologne, Minneapolis and Paris. In the U.S., their exhibition "Guerrilla Girls: Not Ready to Make Nice" became a sensation. And last year the group organized new projects at Tate Modern and Whitechapel Gallery, one of which ended up reaching Dolapdere.