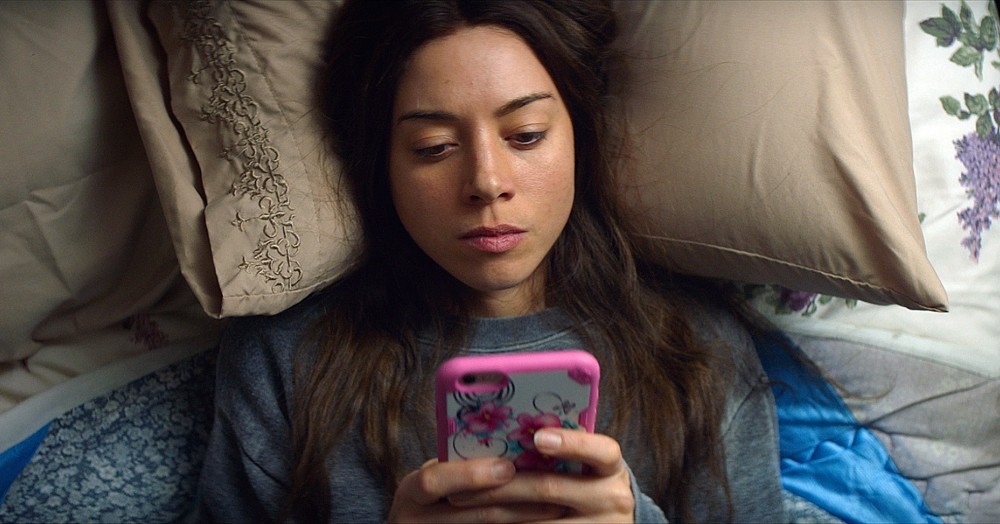 Have you ever been jealous of someone on Instagram? Or gone down a spiral of late night scrolling that starts out as voyeurism and ends in despair? That's the sensation captured in "Ingrid Goes West," a new indie film out Friday that skewers both sides of the social media equation with uncomfortable acumen.

It's the latest satirical pop culture effort to delve into the painful realities of the way social media impacts our lives. It's been expressed as a hyper-exaggerated dystopia in the "Nosedive" episode of "Black Mirror," which imagines a society where class and opportunity is based on social media popularity and where strangers and friends alike can impact your rating based on any interaction.

"Portlandia" star Carrie Brownstein also created a horror landscape in the Kenzo promotional short "The Realest Real," where select fans actually get to be with the famous people they interact with online.

Then there is "Ingrid Goes West," which is just close enough to reality to make you squirm. On the one end, there's Ingrid, played by Aubrey Plaza, who we meet in a rage spiral observing a wedding she wasn't invited to. She's a loner with obsessive tendencies who upends her life, moves to Los Angeles and reinvents herself into the image of a stranger she's become enchanted by on Instagram: Taylor Sloane (Elizabeth Olsen).

You know a Taylor Sloane, even if you don't think you do. She's the woman who posts a perfect Instagram photo of the perfect vintage copy of Joan Didion's "The White Album" with the perfect quote and a jumble of hashtags like #blessed and #inspiration. The one whose account is full of her Moon Juice smoothies and Erdem dresses and Clare V clutches and succulents and California sunsets and trips to Joshua Tree.

She's never getting the oil changed on her unwashed car, or paying bills, or cleaning the toilet.

Maybe she's a friend, or a friend of a friend, or maybe you follow her even though you don't actually know her, but it's not creepy because she has hundreds of thousands of followers. She is an Influencer. Not quite a celebrity, but not quite normal, her life is her brand and you are her envious admirer, devoted subject and customer.

When director and co-writer Matt Spicer envisioned the idea for "Ingrid Goes West," the "Black Mirror" episode had not come out and he saw a void in media that examined the "love/hate" relationship he and his co-writer David Branson Smith had with social media. Both were in relationships with women who had significant followings. They knew the searing jealousy that can boil over looking in on the filtered lives of others.

"It really captured how people interact right now and the problems with that," says Plaza, who also produced. "And I really liked the story of a girl who really wants another girl to be her friend and to like her."

She and Olsen approached their characters without judgment. Both, in essence, just want to be liked and fit in, although Ingrid takes some dark, possibly borderline turns in her expression of that.

The filmmakers didn't want to assign a mental illness to Ingrid, however.

"We wanted the audience to see parts of themselves in (Ingrid)," Spicer says. "We didn't want them to write her off."

The actresses have an understandably different relationship with social media as celebrities.

"It's really confusing sometimes. It can be a really great tool as an actor and a public figure," Plaza says. "But then the flip side is that that can sometimes be really invasive and it's hard to navigate because it's too much access and too much awareness. It's hard to find a balance."

In fact, Olsen, once a social media detractor, only joined because of the film. Now she has 668,000 Instagram followers.

"Honestly I have less of a judgment against it because of this movie," Olsen says. "I think I'm starting to figure out that there is a way to poke fun at it but also use it to your benefit."

"Ingrid" and "Nosedive" are scratching at the surface of something that the social sciences are trying to explain through exploring how lives are actually affected by social media.

One study from the Center for Research on Media, Technology and Health at the University of Pittsburgh found that heavy use of platforms like Facebook and Instagram among adults ages 19 to 32 is associated with feelings of social isolation.

Another from the Johns Hopkins Bloomberg School of Public Health found that overall, "The use of Facebook was negatively associated with well-being."

Karen North, a psychologist and director of the University of Southern California's Digital Social Media Program cautions against headlines that project conclusions on correlation.

"There are things that we've known for decades about human behavior and social dynamics, those will not change, but now it's mediated by digital devices," North says. "It's easier to find likeminded people, but at the same time it accentuates problems of human interaction."

kes to think about it in terms of the Boomerang Effect. Essentially, when you get your expectations up about something that can help you and then it doesn't, you end up feeling more hopeless than before.

"There's a term called depressive realism. People who have a tendency to be depressed are often more realistic about themselves, whereas other people continue to enjoy the fantasy of the way they want their lives to be on social media," North says. "People present their lives to each other in a way that embellishes their lives. For people who tend to be depressed, they somehow believe that other people's posts are accurate."

"Usually, the technology isn't to blame in the stories," Brooker told The Associated Press. "It's just facilitating some weakness in our character."

Films about tech can have a shorter shelf life than milk, but "Ingrid Goes West" seems especially of-the-moment both in its aesthetic and story.

"We shot it and made it so quickly that it does feel still somewhat relevant," Spicer says.

It might also make you think twice about snapping an Instagram of your avocado toast, no matter how many likes it will get you.