Al Ma'mal is The Workshop: The Palestinian Art Revival in Jerusalem's Old City 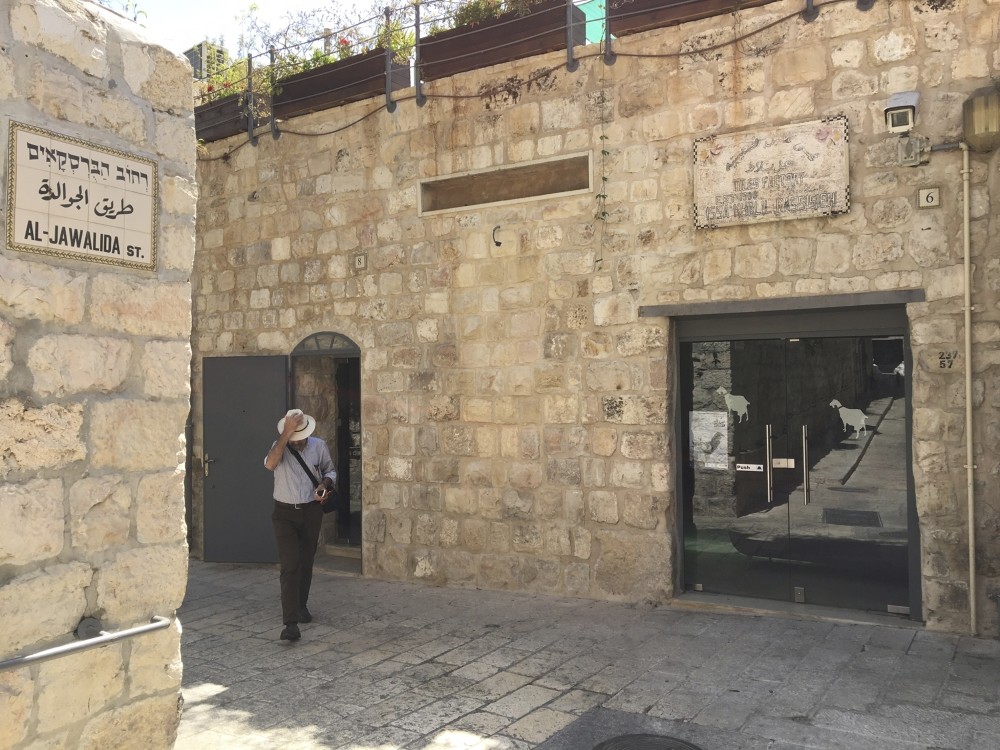 The Al Ma'mal Foundation for Contemporary Art is one of three surviving Palestinian art galleries in East Jerusalem. Former director of the Palestinian Museum, the Jerusalem-born Armenian-Palestinian curator Jack Persekian first opened Al Ma'mal as a small gallery in the shadow of the Latin Patriarchate in 1998 before moving to a historic tile factory across the street in 2013. The factory was known as Al Ma'mal, which in Arabic means, ‘the Workshop'

From the New Gate to Jaffa Gate, the 16th century Ottoman-era fortress walls of the Old City of Jerusalem gleam with the pearly exaltation of unshakable and seemingly interminable renown in this world, and for believers, into the next. Since the reign of Suleiman the Magnificent, pilgrims to the Cave of the Patriarchs, now in modern-day Al-Khalil (Hebron in Hebrew), have stumbled over palm-reading beggars while tolerating the crusading preachers once crowding Jaffa Gate. By 1889, the Christian Quarter had its own special outlet beyond the imperial walls where it increasingly expanded after the opening of the New Gate.

The four historic quarters of the Old City in Jerusalem preserve the colorfully distinct heritages of Armenians, Jews, Muslims and Christians, as they welcome newcomers from as far as Afghanistan and India. The ivory stone walls of the polished rock-hewn streets gravitate with the global prestige that has fixed the city as the mythopoeic center of the world for untold cultural and spiritual expressions. In the Christian Quarter, beside the busy market avenues, local districts are silent inside the Old City walls, harboring an otherworldly peace as profound as the whole planetary foundation, setting the city and its people in a terminal relationship with each other, wedded for history. 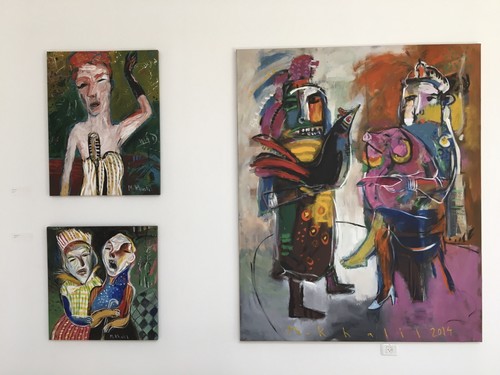 Around the corner from the Latin Patriarchate, where Catholics returned to Jerusalem under the flag of the Vatican in 1847 after over five hundred years of banishment, the artisan tile factory of the Palestinian Kassisieh family lightens the solemn religious ambiance with a postmodern engraving: "Jerusalem is the Fame, Peace is the Aim". Established in 1900, the factory was known as The Workshop (Al Ma'mal in Arabic) that illuminated Palestinian homes throughout Jerusalem and the region into the 1940s. Al Ma'mal kept its name as it became the Foundation for Contemporary Art, essentially serving as the nucleus for the latest Palestinian art revival in East Jerusalem. Beside the Kassisieh factory relief, the only sign for Al Ma'mal is a goat symbolizing headstrong endurance, located over the glass doors. Inside are remnants of its tile-making past, now maintaining the antique aesthetic of Palestinian cultural heritage transformed from its skilled craftsmen to its abstract painters.

The heir to the tile factory building is Issa Khalil, an Al Ma'mal board member and Palestinian ambassador to the Holy See. He witnessed the radical transformation of his family legacy. While helping his grandfather before school at the workshop in the 1970s, he saw its closure following military occupation and regulatory interference by the Israeli government, which effectively destroyed traditional industries and family-owned local businesses in the Old City. 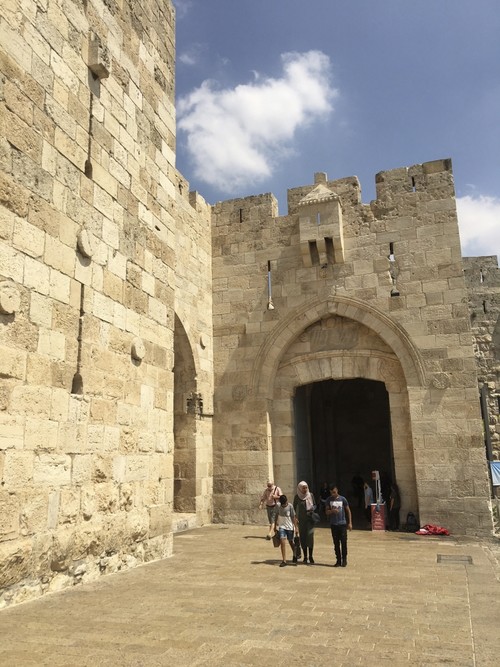 Outside Jaffa Gate, tourists encounter the Ottoman heritage of Jerusalem, most unaware that the Arabic script they see is in fact Ottoman.

In 1992, Armenian-Palestinian curator Jack Persekian opened Anadiel, the first Palestinian art gallery on Salah Eddin Street near the New Gate. During its brief four-year run, Persekian foresaw more potential in the abandoned Kassisieh tile factory. He established Al Ma'mal Foundation for Contemporary Art in 1998 as a nonprofit organization. While there has been a recent wave of commercial art galleries selling Palestinian art in the Old City, Al Ma'mal is foremost purposed to recognize and support Palestinian artists who will connect with undeserved communities in East Jerusalem.

The paintings of Ramallah-based Mohamed S. Khalil are on display until the last week of the month for his solo show titled, "The Mundane." Born in Jordan in 1960 and educated in Dresden and Damascus, his impressionistic abstractions draw from his 1994 return to Palestine, his homeland, where he has since developed a prestigious series of international exhibitions while working for the Palestinian Ministry of Culture. It is said that he only paints on the side, and in that sense his work embodies the soul of the Naive and Art Brut movements. In his oversaturated color schemes and recurrent noetic symbolism, there are shared affinities with Turkish artists Fatih Urunç and Özkan Gencer. 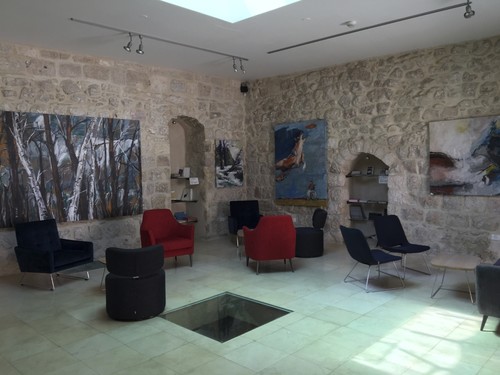 At the entry level, the cool stone walls of the old tile factory established in 1900 are filled with contemporary art, films and music.

The upcoming artist, Ines Halabi lives and works in Jerusalem as a practitioner of mixed-media, research-based artworks that fall within the genres of visual media, installation and video. Her show at Al Ma'mal will open in late September. Halabi spent a year over obscure photographic archives in Basel, Switzerland, after earning a residency nomination granted by Al Ma'mal. She took ample time to let her creative juices flow while appreciating the bankrolled, punctual chocolatiers famous to the Swiss lifestyle. She saw her muse in the photographs of two cousins who documented themselves collecting artifacts in Southeast Asia. Her work highlights the subtext of colonial history in the images in a series of photo interventions and manipulated visuals that highlight cultural appropriation.

In March, the founder of Al Ma'mal, Jack Persekian co-curated a fellow Armenian-Palestinian, the artist Benji Boyadgian, whose site-specific installation integrated the art of tile-making with contemporary sculpture. His art required changes

to the building, including a new ceiling window, and glass flooring for his piece that extended from the foundation to the roof. While preparing the exhibition, archaeologists excavated a well from the Islamic period, over a thousand years old, and a wall that could be part of the earlier Old City from the time of Saladin.

In honor of the creative heritage of the Kassisieh family, Al Ma'mal is employing every last aspect of the building. Its rooftop doubles as a cafe and concert stage, with startlingly beautiful panoramas of the Old City. At the basement level, the bygone ceramic dust of the old tile manufacturing feels like it has yet to completely settle. Nowadays, there is a video projection screen for film nights. It is often left down for frequent use behind an upright piano and sound equipment ready for live music, such as the Palestinian rock band El Container, or Dina Shilleh, who will release her album, Sudfa, at Al Ma'mal on Aug. 25.

Al Ma'mal is just one of three pioneering Palestinian arts institutions in Jerusalem's Old City. Together with Al Hoash (The Courtyard, in Arabic), and Yabous Cultural Center, Al Ma'mal has organized a cultural network called Shafaq to raise funds collectively while developing activities. The network will inaugurate its first program in October with a night's festival to revitalize the Old City after dark, much in the spirit of the daytime Jerusalem Show when Al Ma'mal exhibits a number of site-specific pieces from West to East Jerusalem. The main focus of the night's festival will be on Al Zahra Street and its surrounding neighborhood with such cultural hotspots as Al Quds Cinema, Edward Said National Conservatory of Music and El-Hakawati (Palestinian National) Theatre.

"East Jerusalem has sort of lost all cultural activity. Our audiences are limited to middle-class, open-minded families and we want to reach out to the general public," said Aline Khoury, the programming director at Al Ma'mal. "West Jerusalem is active at night. In East Jerusalem, as soon as the sun sets it's a ghost town. We're doing a Jerusalem nights festival to activate specific neighborhoods."

Next year, Al Ma'mal celebrates 20 years. To commemorate the accomplishment, they recently began hosting London-based writer Nicola Gray at the in-house residency on the gallery floor to publish a retrospective art book. Since 1998, the Foundation has broadened the cultural landscape from the New Gate to Jaffa Gate, and from Anadiel to Al Ma'mal contemporary Palestinians are creating themselves anew as they take to the Old City inspired by a future even more glorious than its past.