Long-delayed Louvre Abu Dhabi to open its doors in November 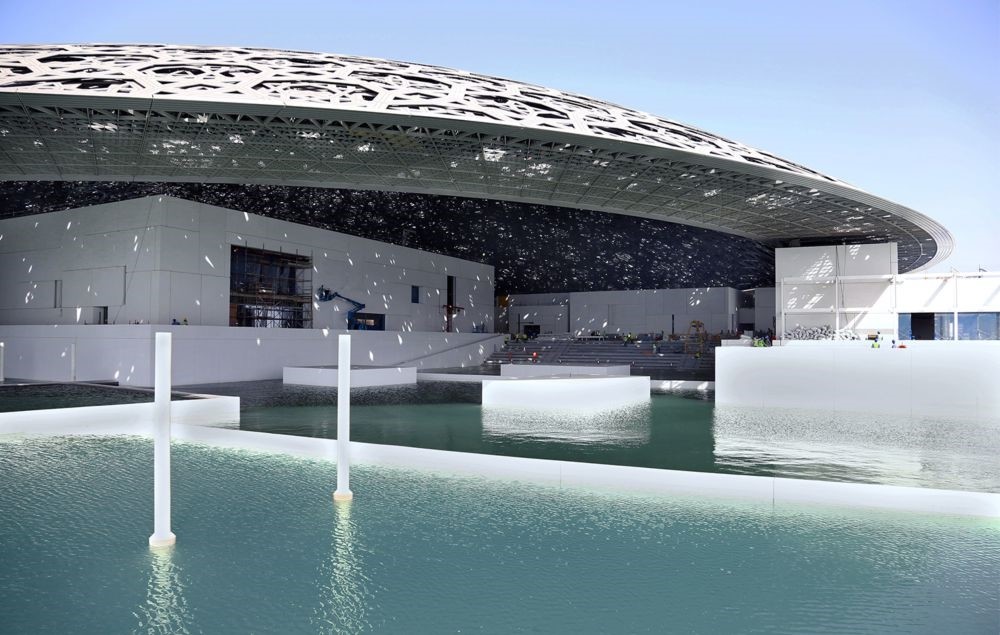 The Louvre Abu Dhabi will finally open its doors to the public in November, bringing to the Gulf Mesopotamian artifacts and post-impressionist masterpieces in the first Louvre-branded museum outside of Paris.

Housing 600 works of art, including 300 loaned by 13 French museums for the inaugural year, the Louvre Abu Dhabi is described as the "first universal museum" in the Arab world.

It will open to the public on Nov. 11, French Culture Minister Francoise Nyssen said at a news conference Wednesday in Abu Dhabi.

The museum has been a decade in the making and is opening five years behind schedule.

Among the works on loan to Abu Dhabi are Leonardo da Vinci's La Belle Ferronniere from the Louvre, which houses the world's largest collection of art, and Vincent van Gogh's self-portrait from the Musee d'Orsay.

Designed by Pritzker Prize-winning architect Jean Nouvel of France, the "museum city" is reminiscent of an Arab medina, enveloped by a part arabesque, part futuristic silvery dome that lets in the light in patterns mimicking leaves of the palm trees of the Gulf.

While the Louvre Abu Dhabi will not lack its Rodins and Gaugins, for some, the real heart of the museum is in its narration of ancient civilizations through artifacts acquired by the United Arab Emirates.

The highly publicized architecture of the Louvre Abu Dhabi pays homage to the surrounding culture.

"I turned to the geometry of the Arab city because I am of the idea that a museum is much more a neighborhood than a building," Nouvel told AFP. "I also wanted to play on this idea of openness, that of a desert open to the sea."

The planned opening comes a decade after France and the UAE agreed a 30-year partnership initially reported to be worth $1.1 billion under which many top French museums will loan art to Abu Dhabi for 10 to 15 years.

French President Emmanuel Macron is expected to attend the inauguration of the museum, which had originally been scheduled to open in 2012 but was pushed back after delays in funding and construction.

The decision to grant Abu Dhabi the rights to the Louvre name sparked heated debate in France with critics accusing the Louvre of "selling its soul" and questioning the emirate's record on labor rights.

There have also been concerns about the transportation of the art and the conditions in which it will be stored, in a country where temperatures soar well above 40 degrees Celsius (over 100 degrees Fahrenheit) in the summer.

"Their protection is vital to us and we have made sure we have the systems in place to protect them against the environmental conditions," Mohamed Khalifa al-Mubarak, chairman of the Abu Dhabi Tourism and Culture Authority, told AFP. "The museum's galleries are operated by sophisticated climate controls for humidity, temperature and light and during installation, the works are in environmentally protected crates and cases to make sure they are not affected by outside conditions."

Guarded by Emirati forces, in coordination with French experts, including civil defense and terrorism security forces, the art is protected by "state of the art security systems and procedures, in line with international standards," said Mubarak.

The Louvre Abu Dhabi is part of "a major cultural strategy" to promote the city as a patron of the arts in a region increasingly focused on soft power.

About five percent of the overall museum will be dedicated to contemporary and modern art. The rest focuses on telling the story of world histories and religions.

In the gallery of world religions, a sixth century Koran, a gothic Bible and a Yemeni Torah face each other, open to verses that give similar accounts.

"To send that message of tolerance is really important for our time," said Mubarak.

A branch of the Guggenheim, still under development, and the Zayed Museum, the national museum named after the country's founder, are located on the same island.

The Louvre Abu Dhabi's opening comes as the UAE, which in April announced the establishment of a Soft Power Council, is locked in a diplomatic and public relations battle with neighboring Qatar, accused by its Gulf neighbors of supporting Islamist extremism.

The UAE will also host the global trade fair Expo 2020.

"We're definitely not this closed-off society that's putting a massive wall up," said Mubarak. "We (the UAE and France) have a goal that is exactly identical: we both want to tell the world how our history is connected. Through culture, the world can become a better place."