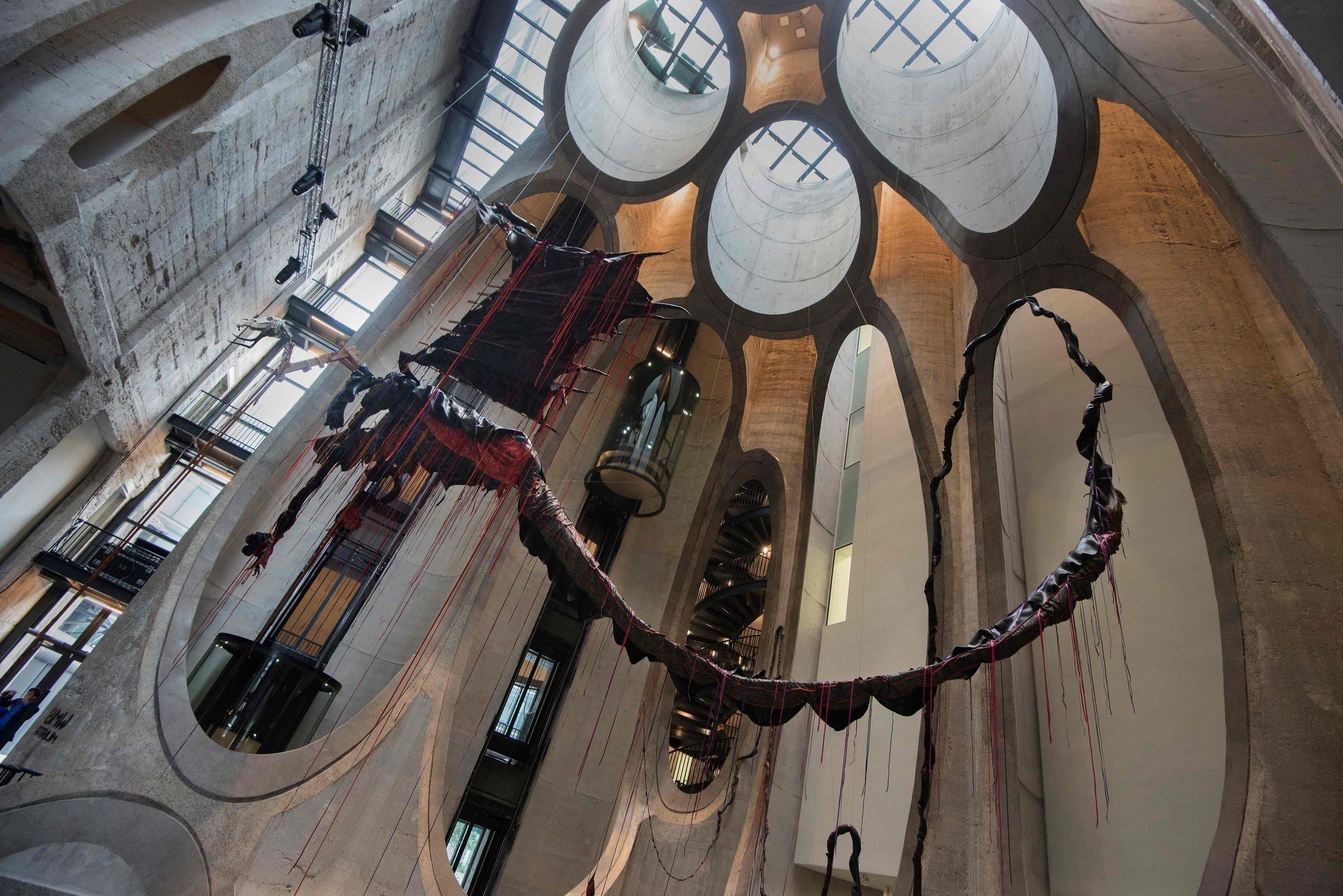 A sculpture by South African artist Nicholas Hlobo dominates the main hall in The Zeitz Museum of Contemporary African Art.
by Sep 18, 2017 12:00 am

How does one turn 42 massive, concrete tubes into a museum? British star architect Thomas Heatherwick has done it. He converted a historical grain silo in the South African city of Cape Town into the continent's first museum for contemporary African art.

Pitching itself at the same level as London's Tate or the Guggenheim Bilbao, the Zeitz Museum for Contemporary African Art (Zeitz MOCAA) will be filled with thousands of works donated by private collector Jochen Zeitz, a German philanthropist and former boss of sports brand Puma.

The Zeitz MOCAA is located on Cape Town's famous shopping and entertainment mile V&A Waterfront, directly on the Atlantic Ocean, and is scheduled to open its doors on Sept. 22, with the organizers expecting 24,000 visitors on the first weekend alone.

Apart from the art, a main attraction will be the museum's entrance hall, a 27-metre-high, cathedral-like atrium with a glass ceiling that also serves as a roof terrace.

Heatherwick, who became famous for designing London's hydraulic Rolling Bridge, describes the conversion of the almost 100-year-old silo, which once stored corn for export, as "one of the greatest challenges" of his career.

Because there were no rooms or gaps between the concrete tubes, his team had to hollow out the building to create the atrium, Heatherwick says.

There was so much rubble and dust during the process, it "felt like a war zone," he adds. "And it was full of bird poo, too!"

Heatherwick collected some original dried corn off the floor, which had been stored in the tubes for decades. A scan of one of the kernels became a cutting tool for the shape of the steel-and-concrete atrium.

The architect cleverly preserved many other aspects of the historical silo and integrated them into the new, modern structure.

Remnants of the shafts through which the grain was poured still protrude from the walls. Tunnels in the basement, through which maize was transported, still exist. In front of the entrance of the museum remain the railroad tracks on which the corn was driven to the harbor.

"I wanted to keep as much of the old architecture as possible," says Heatherwick. "The soulfulness, you can't design that new."

The owners of the V&A Waterfront poured 38 million dollars into the construction of the Zeitz MOCAA, which is spread over nine floors.

Visitors can ascend the atrium in two tube-shaped, glass elevators or climb up an open spiral staircase that provides breathtaking views into the foyer.

Permanent and travelling exhibitions, all depicting African art from the 21st century, will be shown in 80 gallery spaces. One floor is devoted exclusively to art education.

"By Africa, for Africa, from Africa" ??is the museum's motto, to counterbalance an African art market that has been dominated by Western elites for too long, says Zeitz.

The Zeitz MOCAA will therefore show artists from all regions of the continent as well as the diaspora, with Zeitz often acquiring complete exhibitions instead of single works.

"It is a political gesture. We want to create a legacy," explains Zeitz MOCAA chief curator Mark Coetzee, who heads a team of 35 curators who aim to bring different viewpoints and cultural diversity into the museum.

"We want to enable African artists to write their own history," adds Coetzee.

The Zeitz MOCAA will contribute to giving African artists more autonomy, hopes Mntambo, who studied art in South Africa and whose works have been exhibited in New York, Paris, Frankfurt, Barcelona, Sydney and Tel Aviv.