Works of Ottoman genius to be displayed in Washington

An Ottoman genius, who registered history with his miniatures, will be displayed in Washington at the DCA Museum, after travelling to eight other world capitals

The exhibition will be presented in Washington, its ninth stop, from tomorrow until Oct. 13, after being shown in Sarajevo, Belgrade, the 2015 G20 Antalya summit, Istanbul, Vienna, Tokyo, Paris and Rome.

"Matraki, An Ottoman Star," the documentary prepared for the project, was screened in Washington for the first time on Oct. 4, hosted by the Turkish ambassador to Washington Serdar Kılıç. There are 41 pieces of Ottoman history and art in the exhibition curated by Beste Gürsu in which an anthology from the expeditions' city maps in Matrakçı Nasuh's work titled "Beyan-ı Menazil Sefer-i Irakeyn" and "Tarih-i Feth-i Şikloş Estergon ve İstol Belgrad" are applied on tile panels, and another anthology from Matrakçı's verses are written on "Divani" calligraphy panels together with some of his work on canvas by 12 female artists under the leadership of Muralist Sevim Ersoy.

While the exhibition tells the history of Nasuh in various art disciplines, visitors can follow the routes of expeditions by means of Matrakçı's miniatures and they also have the opportunity to discover the 16th century Ottoman Empire in a chronological, political and artistic sense. 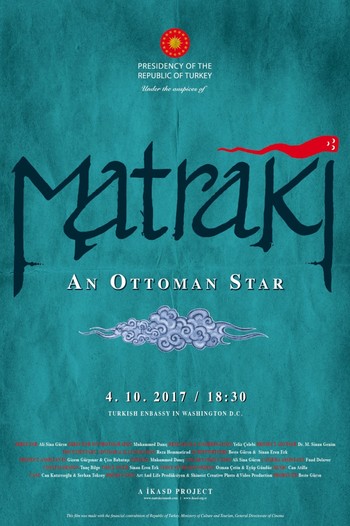 To maintain the permanence of the project, Matrakçı Nasuh's work, "Tarih-i Sultan Bayezid," Topkapı Palace Script Number 1272, has been transliterated from Ottoman and published as a facsimile by the Touring and Automobile Association of Turkey for the project.

The "Matraki: An Ottoman Star" documentary was prepared by Art and Life Production, with support from Turkey's Ministry of Culture and Tourism General Directorate of Cinema.

Matrakçı Nasuh has been included in Commemoration and Celebration Anniversaries by UNESCO on the 450th anniversary of his death. The project, which has been organized on three continents, nine countries and 10 cities with support from the Prime Ministry Promotion Fund, Turkey's Ministry of Foreign Affairs, Turkey's Ministry of Culture and Tourism, the UNESCO Turkey National Committee, the Touring and Automobile Association of Turkey, Turkish Airlines, the PTT, Daily Sabah, A News, Sabah, Art and Life Production, İnsan ve Sanat and CC Translation and Global Communication Partner Anadolu Agency, will be at the National Museum of Hungary in Budapest from Nov. 22 to Dec. 28 as its final stop after Washington.